So attention-grabbing was the previously-described LG OLED screen at the CES that the brand’s 84LM960V seemed to get far less attention than it deserved. So let’s put that right here!

There are two massive reasons why the 84LM960V was actually one of the most important TVs at the CES. First, it’s a huge 84in across – a vast size for a TV that’s genuinely going to be released to consumers at some point in 2012. Second, it’s an ‘Ultra Definition’ (UD) screen, which means it’s got a 4k pixel resolution (3840×2160). Much as we might have been impressed by 4k on the Panasonic 20in 4k LCD TV recently, the fact remains that where 4k most comes into its own is with huge screens like this one. So was the 84LM960V as dreamy in the flesh as it sounds on paper?

Kind of. The problem – not for the first time with demos of 4k screens/projectors – is simply that LG didn’t have any native 4k material to show on its new ultra-definition behemoth. So once again the best we could hope to see was how effective the screen was at upscaling HD to 4k. Sigh. 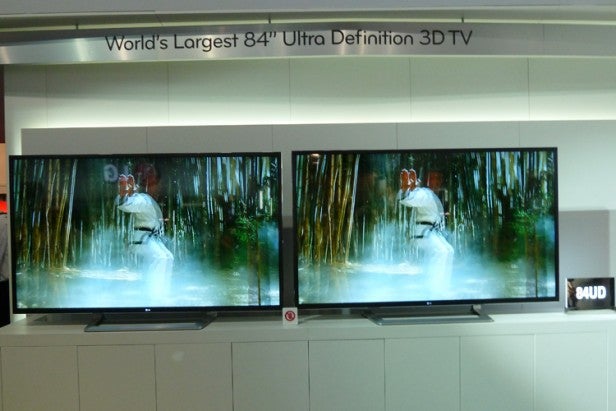 Keeping us keen, though, is the fact that the 84LM960V is the first LG TV we’ve seen to combine passive 3D technology with a 4k resolution. This is extremely significant because it opens the possibility of seeing passive 3D signals with a full HD 1920×1080 per eye resolution for the first time.

With no native 4K material – 3D or otherwise – to show the 84LM960V to its best advantage, LG used a full HD 3D source showing a mixture of martial arts and bright, ‘lifestyle’ footage (largely centred around pretty Korean girls, inevitably). And for the most part, although it was clear the source wasn’t 4k, the advantages of having a 4k resolution in such a large screen were still apparent.

Particularly compelling was how the 4k resolution enhanced our enjoyment of passive 3D. There was little to no visible evidence of the passive 3D filter over the picture, despite the vastness of the screen. Let’s not forget that we can usually see the filter of passive 3D TVs even on normal HD-resolution screens as ‘small’ as 55in. 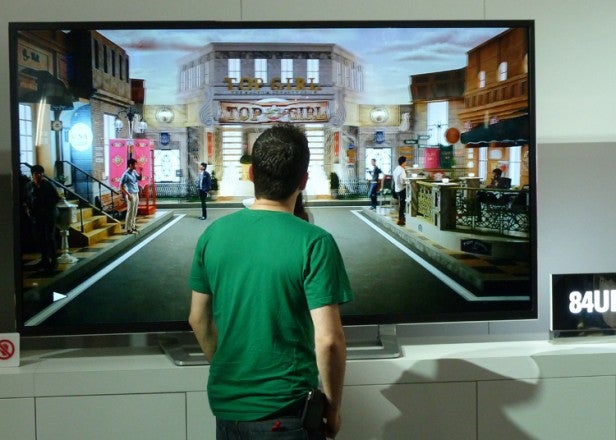 The 84LM960V’s 4k resolution also enhances HD 2D playback, giving pictures a more dense, natural, unpixellated look – especially up close – than you would normally see with a mere full HD TV of such a size.

It has to be said that the 84LM960V’s 4k upscaling engine doesn’t succeed in adding as much detail and texture as some other upscaling systems – especially the Sharp system we covered recently. Also, it’s picture wasn’t quite as punchy and colour-rich as the OLED images sitting pretty much opposite it on LG’s stand, and with lots of motion on screen we found the 84LM960V’s 3D images strangely fatiguing. In fact, we suspect LG was running at least one of its two demo 84LM960V screens with its left/right eye adjustment set incorrectly; something we’ve seen happen with a previous LG 3D demo. 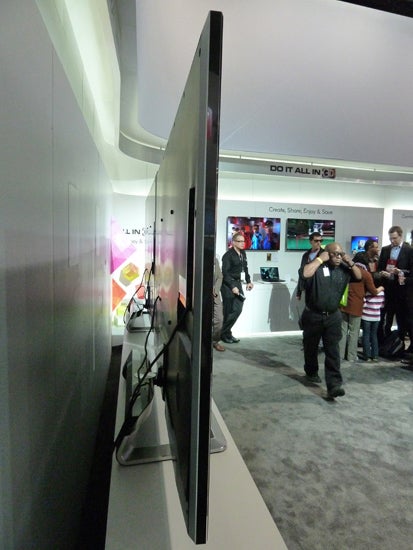 Not being quite as awesome as the OLED screen, though, is hardly a reason to diss the 84LM960V’s performance. For its images are surprisingly bright, vibrant and evenly lit considering that, remarkably, the screen apparently uses edge LED lighting to deliver its images.

Had LG done the sensible thing and rustled up some real 4k content for its 84LM960V demo, we suspect it could have had another hit of almost OLED proportions on its hands. As it was, you had to work a little harder to picture the full potential of the 84LM960V.

Even so, we are still hugely excited by the arrival of this ultra-HD screen later this year. Even if we’re also understandably rather concerned by just how much such a highly specified behemoth might end up costing…