One of the most surprising trends of CES 2014 is the apparent back track on OLED. Sony, Panasonic and even Samsung have all largely ignored OLED this year, leaving just one brand, LG, to plough a strikingly lonely OLED furrow.

In fact, LG’s continuing love for OLED hits you right at the front of the brand’s stand, where you can find not just one OLED TV but a whole, bona fide range of them.

These models are the EC9800 series, measuring in at 55-inch, 65-inch and 77-inch. And they underline their OLED appeal in double-thick marker pen by sporting native 4K UHD resolutions rather than the mere HD resolutions sported by 2013’s OLED TVs. 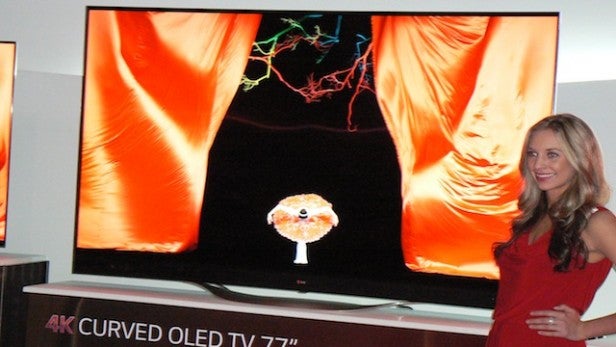 These three models aren’t the only OLED TVs on LG’s stand/release roster either. There’s also a ‘Gallery’ design that builds an OLED TV within an outer frame containing a powerful 2.2 speaker system, and there’s a highly cool ‘bendy’ OLED with a ribbed rear panel that can be flattened or curved according to your preference.

But it’s the EC9800s that represent the most mainstream LG OLED offerings, and so it’s these we want to focus on here via the flagship 77-inch LG 77EC9800. Aesthetically the 77EC9800 is totally gorgeous. The frame around and behind the screen is tiny, creating a high-end, futuristic look that’s especially pronounced with the 77EC9800, as it just seems impossible that such a huge screen can be held in such a tiny frame.

While the jury remains out for us on whether curving TVs is a helpful move, there’s no doubt that the curve on the LG 77EC9800 makes it look even more beautiful. 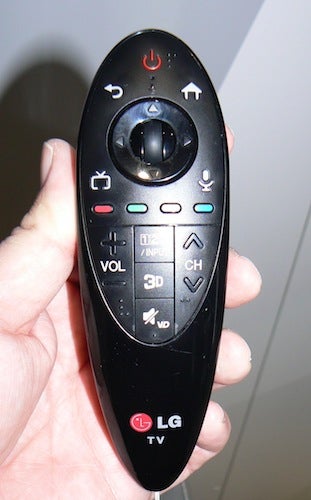 When it comes to features, as well as that key fact of having a 4K/UHD OLED panel at its heart, the most exciting thing about the LG 77EC9800 is its carriage of LG’s new WebOS-driven Smart operating system. The use of WebOS – exclusive to LG – has allowed the Korean brand to really spice up its smart operation with a graphics-rich but never obtrusive or sluggish interface that does a brilliantly intuitive job of quickly paving your way to all the smart features and inputs on offer.

The amount of content links the new menu system can provide at any time without overwhelming your screen real estate is outstanding. Early impressions suggest, in fact, that the shift to WebOS could have given LG the keys to the best Smart TV platform of 2014 — read our extended LG webOS TV hands-on.

The latest magic remote LG’s introducing with its new TVs is outstanding too, blending LG’s intuitive point and click approach with an improved button layout and ‘scrolling ball’.

As ever with an OLED TV, though, it’s the LG 77EC9800’s picture quality that’s most got us dreaming of winning the lottery.  Even though we’ve seen UHD OLED before, the sheer exhuberant power of OLED to impress is as potent as it ever was. Especially when witnessed on a 77-inch screen, where the large proportions are big enough to expose even more starkly OLED’s familiar picture strengths.

These kick off with a truly incredible black level response. Blacks just look black; there’s no hint of the grey wash seen to some extent on all other flat TVs. What’s more, this black level remains perfectly even and consistently black even if you have to watch from down the TV’s side, thanks to the way OLED’s self-emitting pixels avoid the limited viewing angle problems associated with LCD TVs.

Colours look jaw-droppingly good on the 77EC9800, with spectacularly intense saturations and a huge and seemingly infinitely subtly rendered colour range. Actually, the ability of the 77EC9800 to give full rein to OLED’s colour finesse thanks to its UHD resolution (and the spectacular black levels underpinning the colour palette) is arguably even more impressive than simply being able to see four times as many pixels of picture data.

That said, the LG 77EC9800 does provide an aggressive reminder of why OLED is UHD/4K’s friend in pure sharpness terms too. For OLED’s inherent motion clarity versus LCD means you don’t have to suffer any loss of 4K clarity over parts of the image that are ‘in transit’. 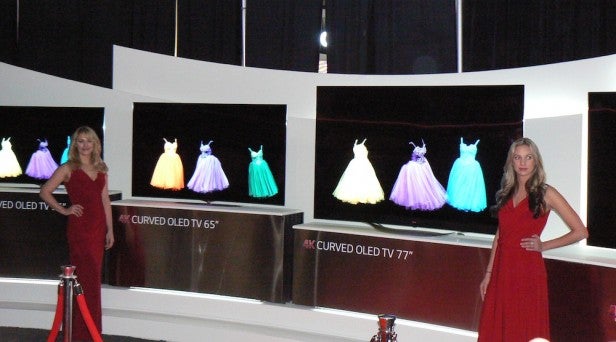 It must be said that LG’s eagerness to emphasise the LG 77EC9800’s black level and colour advantages resulted in a bit too much stark, artificial lighting and animated content in the demo reel than we would have liked. But the show reel does manage to include one bona fide bit of video, showing the gloriously detailed interior of a traditional theatre. And we think we could happily have just stood staring at this image for most of CES without getting bored, so stunning  did it look.

As noted in our previous first look at the Samsung 65U9000, we also felt that the curvature of the LG 77EC9800’s screen actually made a little sense at the 77-inch size, as it adds an extra sense of depth and immersion to the picture without causing too many problems with image geometry unless you’re sat at quite an extreme angle to the screen.

The curve does create a different problem, though. For the 77EC9800’s rather glossy screen causes some quite aggressive reflections of the lights of the show floor, with those reflections being stretched out and filtered into red, green and blue stripes in some places. There’s no doubt, in other words, that you should try and leave your lights as low as possible when you’re watching a 77EC9800.

One other more minor issue was the appearance of some extremely subtle light haloing around the image’s brightest content when it was appearing against a black backdrop. But this would likely be controllable via the set’s setting options if we had access to them, and in any case the type of extreme-contrast content that causes the flaw would be extremely rare in real world viewing conditions.

LG couldn’t offer even a ball-park pricing figure for the 77EC9800, but it will surely be high enough to make your eyes water. Indeed, it’s likely OLED’s ongoing pricing problems that have put rival brands off from pursuing the technology this year. But just because we can’t afford something doesn’t stop us from coveting it. And so long as we covet something as much as we covet the 77EC9800’s OLED tech, then surely LG is right in thinking that OLED tech has a future.