The 65UF950V is LG’s top-tier LCD TV for 2015 – aside from the brand’s huge 79in and 84in UB980V series, that is. The 65UF950V’s 65in screen uses LG’s IPS technology to support wider viewing angles as well as the company’s new ColourPrime technology, and it’s illuminated using an edge LED lighting system. Incredibly slim for an LCD TV, the set promises good sound quality thanks to a Harman Kardon “auditorium” audio system.

The 65UF950V is a beautiful TV. Its 65in screen rests almost magically on the front of a rear, which is so thin that it gives even LG’s OLED TVs a run for their money. What little frame there is around the screen looks and feels suitably opulent, and the general build quality is outstanding.

While most people will spend their time looking at the front of their TV, we should also point out that the 65UF950V’s rear is finished in a very fetching gloss white.

All of the 65UF950V’s connections are built onto the rear of the screen. However, they’re not plentiful: there are four HDMIs, which include support for smartphone-friendly MHL; three USBs for both playback from USB storage devices and recording to USB HDDs; LAN socket and Wi-Fi network options; plus Miracast and WiDi support.

Having revolutionised the smart TV scene with the launch of webOS last year, LG has understandably taken a “if it ain’t broke, don’t fix it” approach to the platform. There are a few differences with version 2 – which we’ll discuss soon in a separate look at webOS 2 – but on the whole the system runs noticeably more quickly. It’s a testament to just how far ahead of the pack webOS was last year that even with few changes it still comfortably holds its own against anything the smart crowd have to offer this year.

Apps on offer include the 4K versions of Amazon and Netflix, plus Sky’s Now TV platform, Wuaki.tv and blinkbox. All 4 and the ITV Player still aren’t supported, and there’s no Freetime or YouView, which you get with Panasonic and Sony TVs respectively. 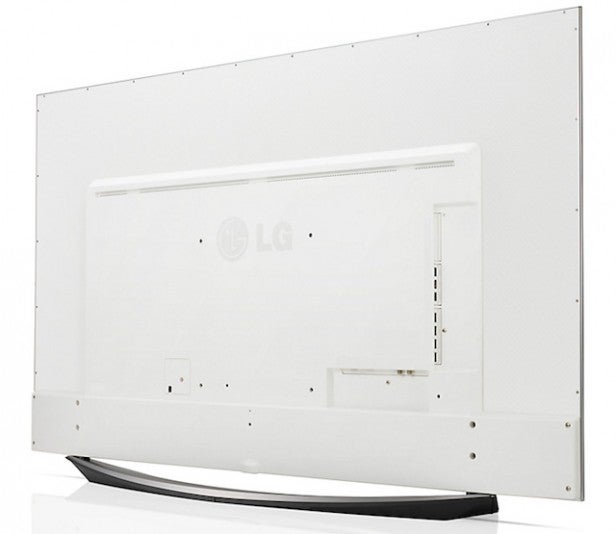 As is customary with LG TVs, the 65UF950V is well stocked with picture set-up tools, offering full colour and white-balance management, gamma adjustment, and plenty of flexibility over the TV’s extensive suite of picture-processing systems. These include local dimming control over the edge LED lighting, a separate black-level booster, the Dynamic Contrast system, a Super Resolution sharpness booster, LG’s TruMotion processing for reducing motion blur and judder, and MPEG and standard noise-reduction systems.

Not surprisingly, considering the thinness of the native 4K UHD screen, the 65UF950V uses an edge LED lighting system, where lights are arranged along the TV’s bottom edge. The screen also supports 3D using LG’s passive system, with two pairs of glasses included free with the TV.

LG claims an enhanced colour performance versus normal LCD TVs thanks to its ColorPrime technology. In this case, ColorPrime describes a new Wide Colour Gamut (WCG) panel design, although other ColorPrime models in LG’s range will use a variant of Quantum Dot technology instead.

From having seen both systems running side by side, we’d say that Quantum Dot delivers a brighter, more vibrant look, while the WCG screens such as the 65UF950V deliver a more subtle, balanced look perhaps better suited to cinephiles.

The last key feature on the 65UF950V’s specification list relates to another part of its striking design. The curved and arced stand also functions as a clever deflector for the sound emitting from the TV’s down-firing speakers. Hopefully this gives a more direct and aggressive sound than you’d get from a down-firing arrangement.

Finally, the one key feature the 65UF950V doesn’t yet support is High Dynamic Range (HDR) playback. We guess it’s possible it could be added later via a firmware update, but LG hasn’t confirmed this.

It’s tempting to suggest that you skip this section: ultimately, there isn’t much you can tweak to stop the LG 65UF950V’s pictures from looking seriously flawed by premium TV standards.

However, if you’ve already purchased a 65UF950V then the best advice we can offer is that you reduce the backlight significantly (to around its 40-42 level); leave the dynamic contrast mode on; and set the TV’s LED dimming feature to its Low setting. This will offer the least distressing balance between the overt grey wash that sits across dark scenes if you try to cut the contrast-boosting tools out of the mix. We’ll discuss the severe light “stripe” problems shortly, alongside shadow detail retention.