The 65EC970V is a 65-inch UHD 4K
television with a curved screen. But much more importantly than that, it
also happens to use OLED screen technology rather than LCD or plasma.
This makes it the first 4K OLED TV we’ve ever tested – and to say we’re
excited about it would be an understatement of titanic proportions.

It’s
fair to say that OLED technology knows how to make an entrance. The
65EC970V looks exquisite thanks to its killer combination of a gently
curved screen, insanely-thin silver-trimmed frame, and even more
insanely-slender rear. The latter in particular is an OLED trademark –
even if in the 65EC970V’s case the incredible slimness only applies to
around half of the rear panel due to the need to accommodate the
necessary connections and processing gubbins that turn a monitor into a
TV. Certainly the 65EC970V looks spectacularly trim when set against the
relative chunkiness of Samsung’s rival UE65JS9500 LCD TV.

The
65EC970V’s stand is lovely too, with its single curved bar design and
subtle OLED logo engraved attractively on the right side. 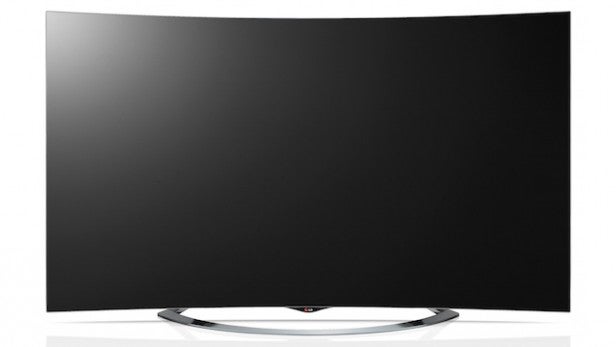 It’s
important to note that despite its mind-boggling slenderness the
65EC970V sports a Harman Kardon-designed speaker system that delivers a
claimed 40W in a 4.0-channel configuration. This and the TV’s stand
design are what chiefly set the 65EC970V apart from the imminent,
slightly cheaper EG960V range we’ll be looking at very soon.

There’s
nothing to complain about where the 65EC970V’s connections are
concerned – other than perhaps wishing they were contained on an
external connections box of the sort Samsung offers with its flagship
TVs. The LG’s connections include four HDMIs, all able to take 4K up to
60fps, a trio of USBs (one up to the 3.0 standard), an RS-232 port for
system integration, and the inevitable LAN and integrated Wi-Fi network
options.

These network connections permit streaming of all sorts
of multimedia from DLNA devices, or access to LG’s online content
network. And of course, access to all of the 65EC970V’s content sources
via LG’s ground-breaking webOS interface.

We’ll be looking at
the latest version of webOS, cunningly dubbed webOS 2.0, in an upcoming
article. However, because this 65-inch screen was delayed far beyond its
original planned October 2014 launch it doesn’t get webOS 2.0!

While
this is obviously a shame, even last year’s webOS system is a cut above
the smart efforts of any rival brand thanks to its attractive, overlaid
interface and content-focused approach. 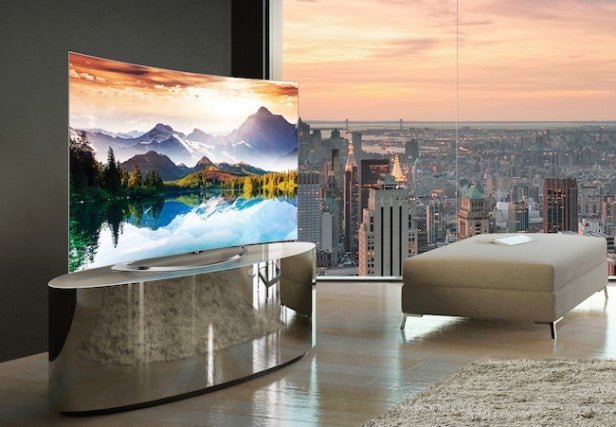 The
OLED technology at the 65EC970V’s heart has been giving home cinema
fans palpitations for years now. The way every pixel in an OLED screen
creates its own light and colour has been helping it produce colours,
clarity and, especially, black levels that have made OLED TVs the
darlings of almost every technology show they’ve appeared at. So it’s a
huge relief after so much teasing to have LG finally – and currently
exclusively – in a position to produce OLED TVs efficiently enough and
in high enough numbers to put them on general sale.

Not
surprisingly, LG’s 4K OLED debutante doesn’t come cheap; at £6,000 it’s
far more expensive than most of today’s 65-inch 4K TVs. It’s not
entirely on its own, though, as Samsung’s UE65JS9500 costs around the
same, reinforcing the fact that Samsung’s High Dynamic Range (HDR) LCD
set is very much LG’s main OLED competitor this year.

Having
mentioned HDR, we have to stress that the 65EC970V does not support HDR.
However, OLED’s stunning black level potential will hopefully ensure
that we still experience a phenomenally rich contrast performance.

While
there’s no HDR, the 65EC970V does carry LG’s passive 3D system complete
with six free pairs of glasses – and as we’ve seen before, passive 3D
tends to really come into its own when it has a native UHD resolution
screen to play with.

You
can record from the built-in Freeview HD tuner to USB HDDs, and you can
also connect your smartphone or tablet for two-way media streaming – be
it multimedia from your smart device to the TV, or streamed video from
the TV to your smart device.

LG has
provided a fairly long set of picture presets for the 65EC970V, though
only a couple of these really make effective starting points for getting
pictures looking their best. The ‘Standard’ mode is the best place to
start setup for most types of source, with Game coming into its own when
– you guessed it – gaming.

There
are, as usual with relatively high-level LG TVs, a couple of ‘ISF
Expert’ preset slots an engineer from the Imaging Science Foundation
could use to save professional day and night calibrations. And actually,
there are enough foibles with the 65EC970V’s colour and shadow
detailing picture elements in its out of the box state to make us
recommend that anyone who buys a 65EC970V does at least consider paying
to have it properly calibrated.

If you’re a DIYer, though, here
are a few of the most important things for you to try and tweak. First,
and most importantly, getting exactly the right balance between the
set’s brightness and OLED brightness settings is quite difficult. The
out-of-the-box settings tend to leave brightness a little low, which
leads to lost shadow detail, yet if you push the brightness too high
then the picture’s otherwise gorgeous black levels can actually suddenly
start to ‘glow’. We ended up settling on around 54-55 for the
brightness, while pushing the OLED brightness setting to 90 or more.

We
also felt the need to use the colour management systems to tame the
set’s red toning slightly (to try and even out skin tones), and as with
most TVs we’d strongly recommend that you turn off all noise reduction
for UHD and, we’d argue, HD viewing; and turn off the motion processing
for the vast majority of sources (except, maybe, 3D).