Bad news: LG OLEDs are still expensive. Good news: LG LCDs are a lot cheaper, and the LG 55SJ850V is a solid choice.

It doesn’t offer the contrast or lighting uniformity of an OLED model, but viewing angles are wide and the webOS smart interface continues to see LG lead the market in terms of user-friendliness. If you want big-screen 4K action for the family and you’re willing to forgive a few lighting issues, there’s plenty to like here. 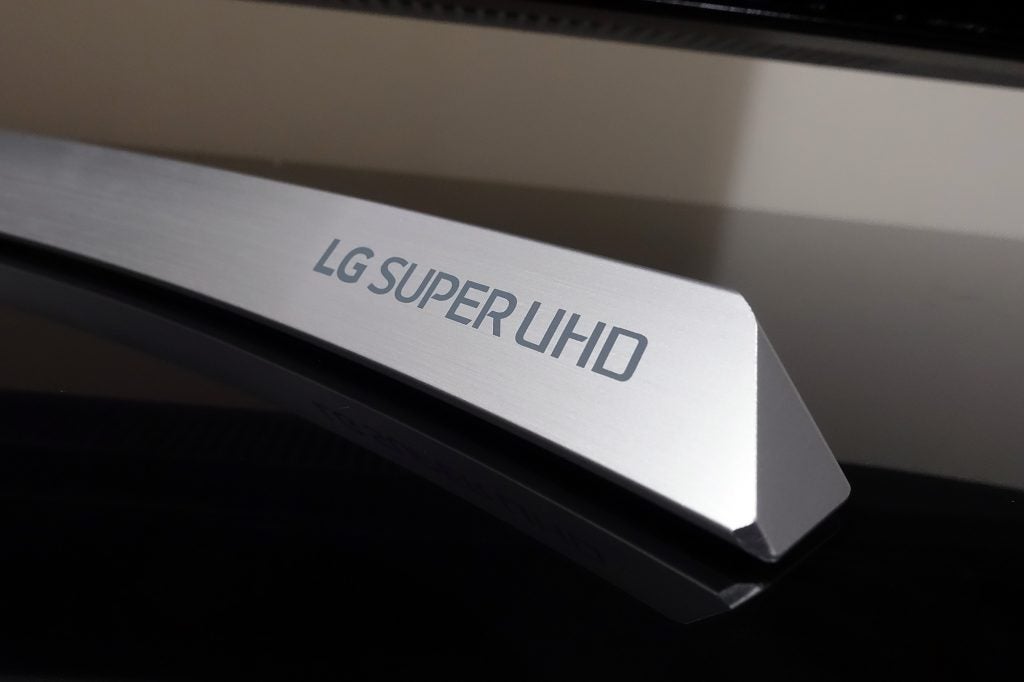 Just because you don’t have the cash to splash on a premium OLED screen, doesn’t mean you have to compromise on premium design. It seems LG has tried its best to make the 55SJ850V look like the LG B7 OLED. Featuring a curved, Toblerone shaped pedestal and a super-slim bezel, the two models are hard to tell apart from the front.

It’s only on viewing the unit from the side does it look noticeably more LCD TV, with a thicker panel. Still, LG does an admirable job of keeping things svelte by pushing as much circuitry as possible down towards the base. The rear of the unit is plastic, but it’s solid enough not to creak in protest during installation.

The ‘neck’ part of the pedestal opens up to accept all cables, which helps to keep things neat.

I love the remote control. It’s one of the most ergonomic I’ve seen this year. It’s smooth to the touch yet sculpted enough to ensure it won’t fly out of your hands. As usual, its built-in gyroscope lets you control an on-screen cursor in the manner of a Nintendo Wii remote. If you’re not into that, the physical keys are snappy and the scroll wheel is super-handy. 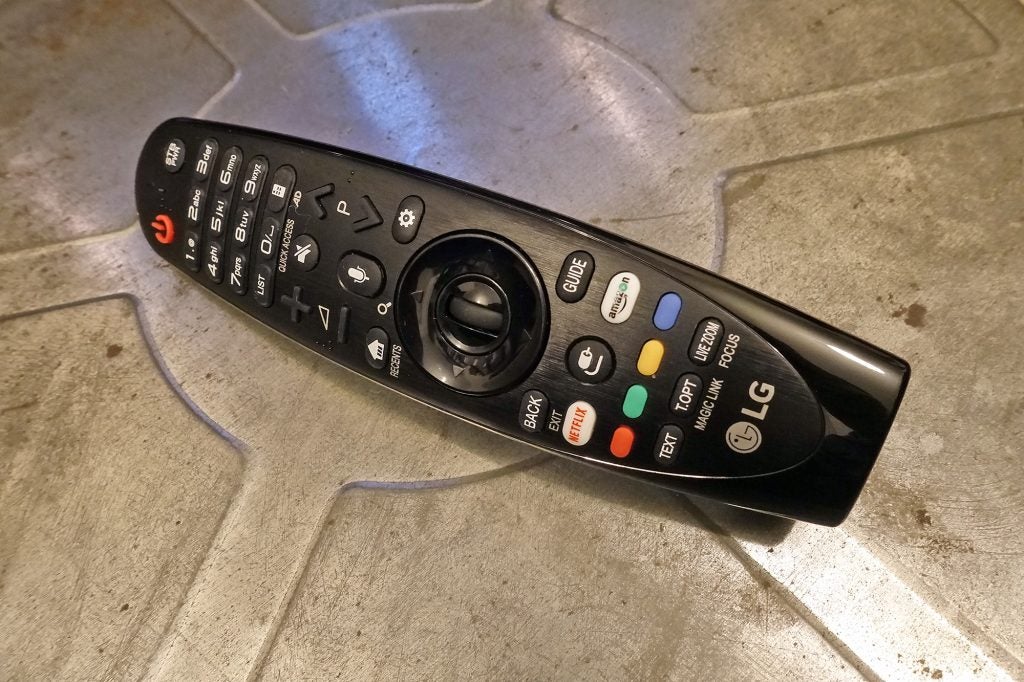 The 55SJ850V has a native Ultra HD 4K resolution (3840 x 2160 pixels). High dynamic range compatibility includes the open HDR10 format as well as the metadata-packed Dolby Vision. It’s an 8-bit panel, however; not a 10-bit one. That will put off those looking for ‘true’ HDR.

It’s also an IPS panel, rather than VA. This isn’t a surprise, since LG has typically favoured the wider viewing angles of IPS over the contrast of VA.

This year, LG is using ‘nano cell’ technology – a rival to the quantum-dot system used by Samsung. I’m told the uniform 1nm size of the nano cells means it can achieve more accurate colours and deeper blacks. 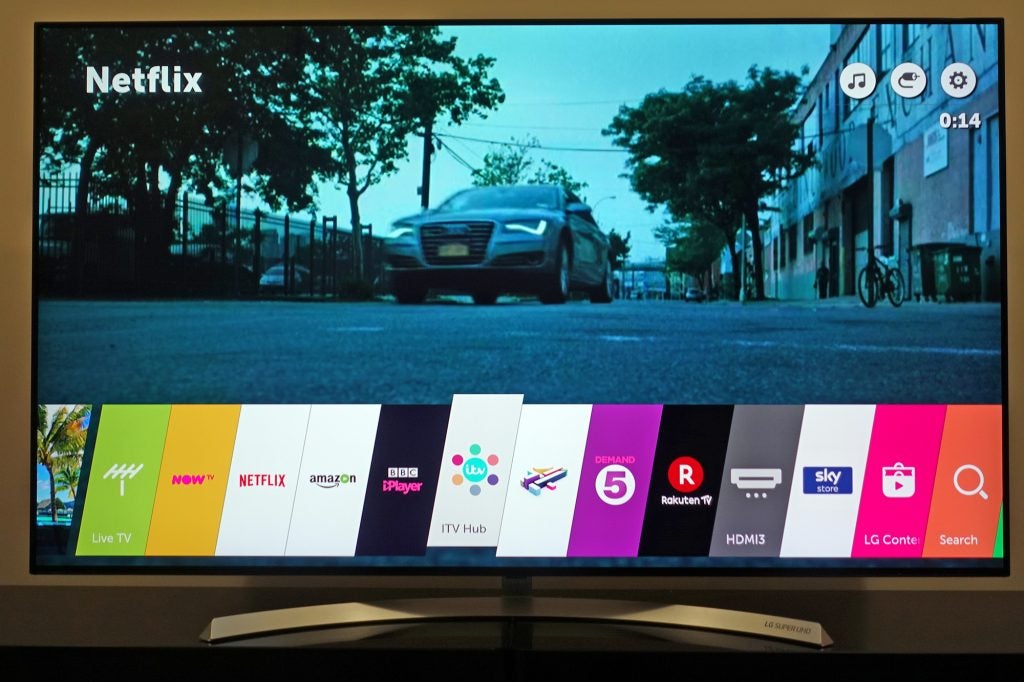 On the software front, LG remains top dog with its webOS interface. It’s simply the most intuitive and useful way to control a TV. There’s an unobtrusive pop-up bar that lets you access your preferred apps, channels and inputs. It’s a multitasking system, which means you can pause your stream, play Xbox for a bit, and return without being kicked out. Are you listening, Android TV?

App support is generous. There’s 4K and HDR versions of Netflix and Amazon Video, plus Now TV, YouTube and the full suite of UK catch-up apps including BBC iPlayer, ITV Hub, All4 and Demand5. Sky Store was recently added, too.

As for connections, the 55SJ850V has four HDMI sockets (all 4K and HDR-friendly), three USB ports, Digital Optical and headphone outputs, antenna and satellite inputs, and LAN for those with patchy Wi-Fi. 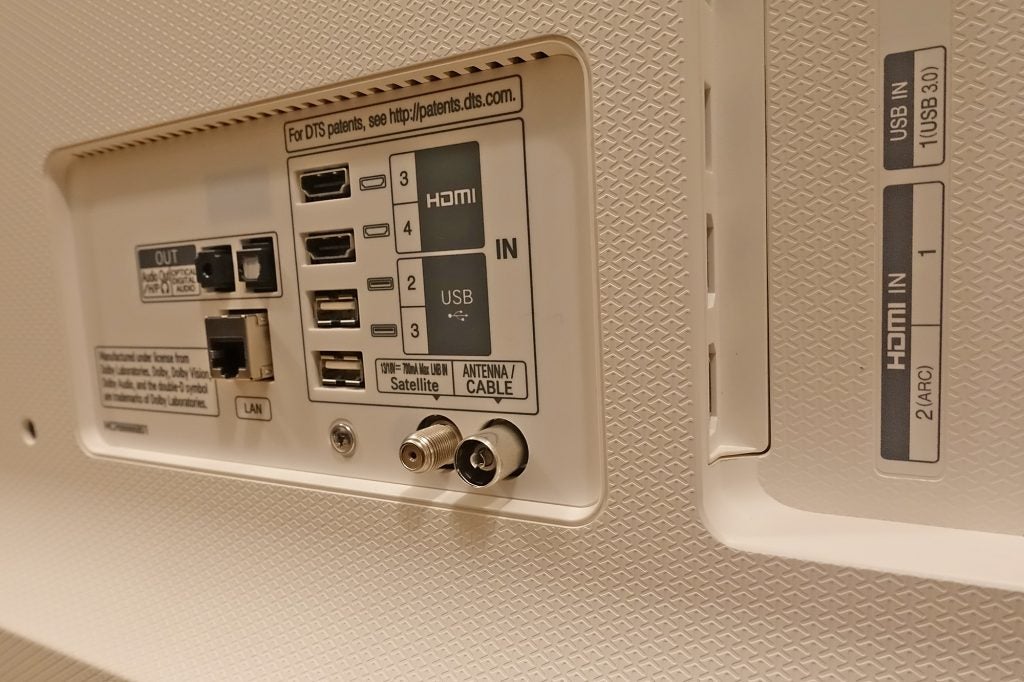 The 55SJ850V’s performance is a mixed bag, but it’s mostly good, so I’ll start with that.

Whether you spin a UHD Blu-ray or stream 4K off Netflix, the picture is beautifully sharp. It’s natural, too. Everything is nicely textured, but without that aggressive, over-etched look that you can sometimes get with lesser TVs trying to overcompensate.

Non-4K pictures look good, too. The SJ850 does an admirable job of upscaling 1080p and 720p sources, which translate cleanly and without much picture noise. It’s only when you play standard-definition pictures that you’ll notice some (expected) fuzz.

LG has done a decent job of colour accuracy and subtlety. When watching the titles of House of Cards, the red and blue of the American flag are vibrant without looking exaggerated, while skin tones are convincing. Shading and gradation could be a little more subtle, but I didn’t notice any striping, which is impressive considering this is an 8-bit panel.

Motion handling is strong, and you don’t need the TruMotion processing that gives everything the weird, glossy look of a telenovela. Set that to Custom mode and knock it down to setting 1 or 2. There are no official luminance figures, but I managed a peak brightness reading of 764 nits with a 10% white window. That’s pretty good, although in typical usage that figure is likely to be half that.

It’s bright enough to be able to appreciate the difference with HDR content, most noticeably when light glints off glass or when headlamps cross screen. Just don’t expect the premium performance of a panel boasting 1000 nits or more – those sets offer much stronger impact.

Performance is a little mixed when it comes to contrast. In general, the picture is dynamic, with enough of a jump between light and dark to look striking whether you’re watching HDR or standard dynamic range pictures. But the lighting issues that generally plague LCD TVs also crop up here. Blacks are never properly black. They appear more grey, especially if you’re watching TV in a blacked-out room or in dim lighting conditions.

Shadow detail isn’t great, either. Dark clothing or hair can appear a bit flat, especially in scenes split with bright sections. Local dimming could also be better, since you’ll occasionally notice some clouding effects. Sometimes this bleeds from the picture into the black bars at the top and bottom. The lighting certainly isn’t as uniform as I’d like.

Related: LG TVs 2017: what you need to know about this year’s lineup 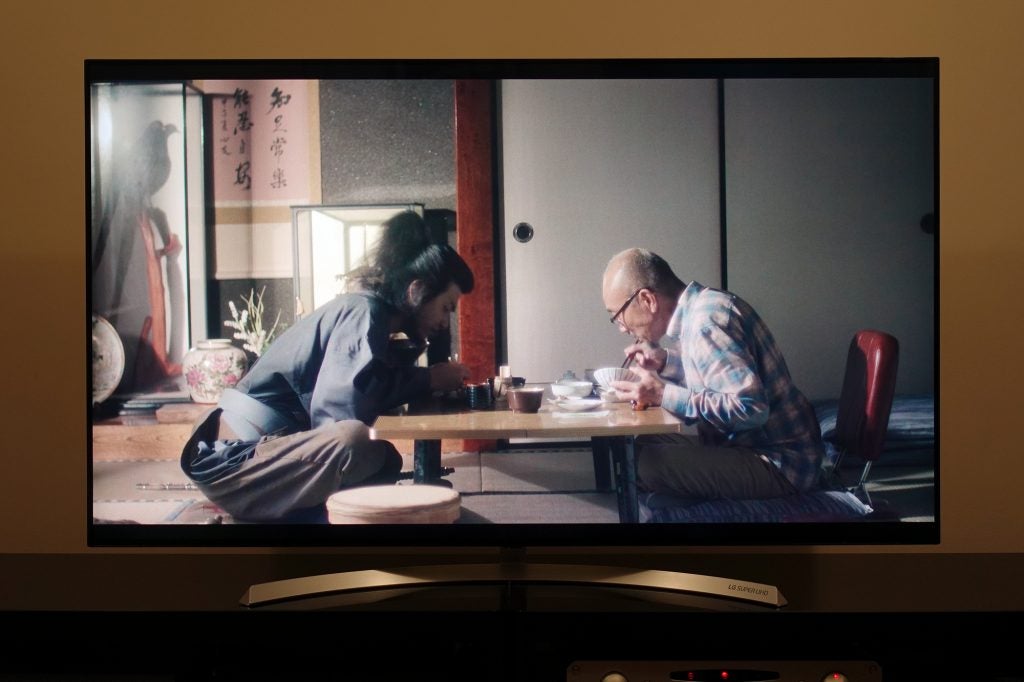 On the plus side, viewing angles are decent. What you get here is better than anything you’ll see with a VA panel, so you needn’t worry about sitting at opposite ends of the sofa. Still, I wouldn’t stray beyond about 45 degrees from centre.

Input lag is excellent, too. I measured it in the dedicated Game mode, and saw a reading as low as 13.7ms. That’s way better than average, and plenty responsive for even competitive gamers.

Finally, a shout out to Harman Kardon, which worked with LG on the sound. This is a rare example of a TV that doesn’t immediately need audio reinforcement, although you’ll still need help if you want a properly cinematic audio experience.

As it is, the SJ850V is capable of a large, spacious soundstage, with surprisingly precise effects placement for a TV. Tonal balance is good: voices are never shrill and there’s just enough bass for soundtracks to have an impact. Make sure to use the Magic Sound Tuning feature, which automatically adjusts the EQ to suit your room. 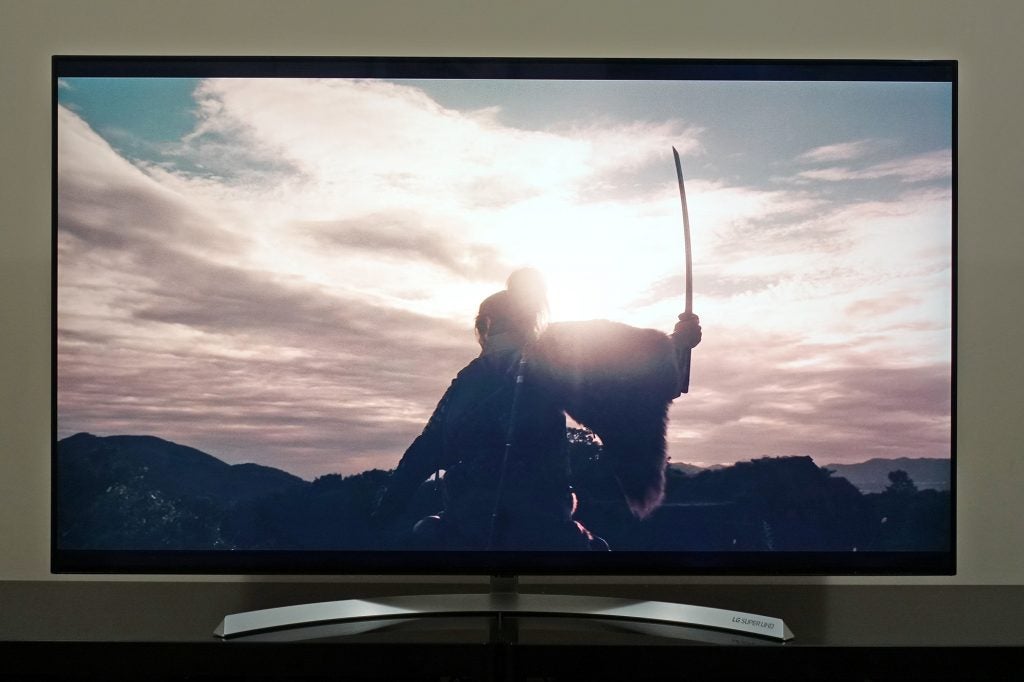 LG’s top-end OLED TVs are still out of reach for many, and while this LCD TV doesn’t offer that level of premium performance, it does an admirable job for the money.

It offers impressive resolution and colour handling, viewing angles are wide enough to cater for all the family, and the operating system is the best there is. The price to screen size ratio is good, especially if you can pick up the TV on a Black Friday deal.

The only real issue is black performance, which is a little underwhelming. For a similar price, the Samsung UE49MU7000T does a better job of handling dark scenes, and also offers a higher peak brightness.

If you want big-screen 4K action for the family and you’re willing to forgive a few lighting issues, there’s plenty to like here.