LG has certainly talked the good talk with its new ‘Film-Type Pattern
Retarder’ passive 3D TVs. But now it’s time to walk the walk, as we find
ourselves staring with anticipation at the brand’s
flagship 3D LCD TV, the 55in 55LW650T.

The big point about FPR, so far as we’re concerned, is that it makes
3D much more affordable. For whereas last year’s passive 3D TVs had to build a
glass substrate filter into the screen, at great cost, with FPR you essentially
just stick a polarising filter onto the front of the screen and save yourself a
heck of a lot of work and cost in the process. Which results, of course, in a
much cheaper proposition for consumers. 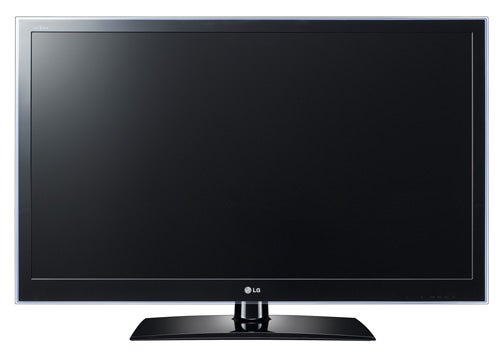 The first thing to say about the 55LW650T, though, is that it’s not
quite as attractive as we might have liked LG’s flagship FPR 3D TV to be. Sure,
its dark bezel looks opulent and glossy enough, and the appearance of a few millimetres
of transparent material beyond the main bezel’s edges cleverly emphasises the
screen’s svelte depth. But the bezel’s width feels a little old fashioned by
today’s standards (certainly when compared with the practically bezel-free
Samsung D7000 and D8000 series), and we kind of missed the all-in-one-plane
fascia sported by LG’s Infinia TVs.

It’s back to cutting edge business with the 55LW650T’s connections,
though. The increasingly inevitable four v1.4 HDMIs get the ball rolling, but
there’s also a pair of USBs for playback of most types of multimedia files -
including DivX HD – and a LAN port for either accessing files on a networked PC
or else transporting yourself to the nothing-if-not-varied world of LG’s new
Smart TV online service.

More needs to be said about both these LAN-related functions. First,
when it comes to accessing stuff via your PC, the 55LW650T is the first TV we’ve
seen to go the PLEX route. PLEX is essentially a media server utility designed
to provide a ‘bridge’ between your Mac or PC and your TV (or other PLEX-enabled
home theatre equipment). Movie streaming, home video streaming, TV streaming
and music sharing are all possible via PLEX, and there’s much to admire about
its pretty, clean, graphics-heavy interface. It has to be said we came across a
few problems with setting PLEX up for this test, but we’re sure it’s just that
it’s a pretty new system that will doubtless be refined over time. 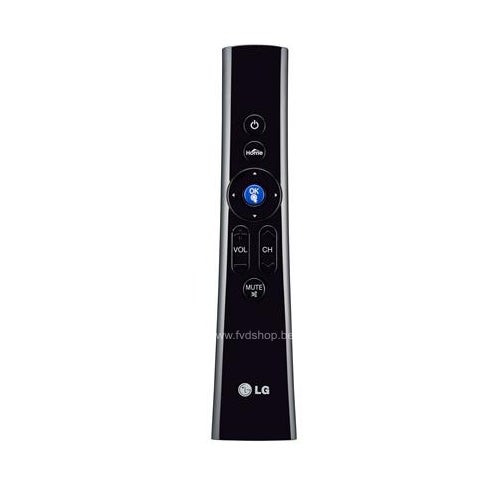 The new Smart TV online platform, meanwhile, brings a smartphone
sensibility to online TV functionality, by putting pretty much everything in
app form, and having a store from which you can buy/download the apps you
fancy from LG’s wide-ranging and eclectic app collection.

We’ve seem plenty of weird and not particularly wonderful apps on
the other Smart TV platforms that have launched this year. But LG’s current
offering turns the wacky-meter up to 11, with such startling discoveries as an
eye test app, a colour blindness test app, an app that teaches you first aid, a
Tarot app, and even a Wine Sound app that features wine glasses being played as
a music instrument. Right you are.

As with all the latest Smart TV platforms, LG’s will be updated
routinely in the coming months. And we were mostly very pleased, too, with the
interface LG has devised for its Smart TV system. It’s very graphics-rich,
spaciously laid out and just generally appealing, with apps in the store
presented on virtual ‘shelves’ and a single screen providing access to huge
amounts of content – as well as all your AV inputs and, less helpfully perhaps,
the main TV calibration menus.

You can ditch the standard remote in favour of an
innovative and actually very useful ‘Magic Remote’ option that lets you control
the TV by pointing the remote directly at the option you want to
select.

As with most LG TVs, the 55LW650T is endorsed by the Imaging Science
Foundation, and as such is extremely well equipped with picture fine tuning
tools. 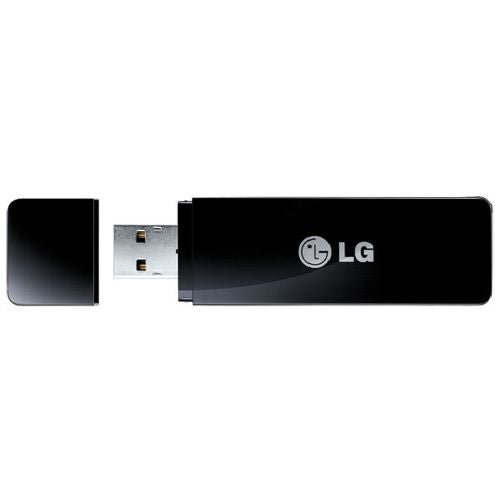 Other key things you should know about the 55LW650T before getting
into how it performs are that it’s distinguished from the LW550T series lower
down LG’s range by having 200Hz and a slightly higher claimed contrast ratio of
9,000,000:1, and that it comes with seven free pairs of polarising 3D glasses.
Yes, seven.

This is clearly a very big deal when you think that Panasonic’s
recently-reviewed P50GT30 active 3D TV doesn’t come with any free glasses at
all, and that each pair you have to buy will cost you the best part of £100. In
other words, as well as the 55LW650T already being aggressively priced for a
55in TV, its glasses situation alone saves you £700 versus the cost of getting
a similar number of glasses for an active 3D TV. So far as we’re concerned,
it’s in this sort of equation that FPR 3D’s considerable threat to active 3D
really lies.

Not surprisingly we kicked off our tests of the 55LW650T’s picture
performance with some 3D action. And we weren’t remotely surprised to find the
set’s accomplishments and shortcomings very much in-line with the pros and cons
described in our previous head-to-head of early active and FPR passive 3D
samples. 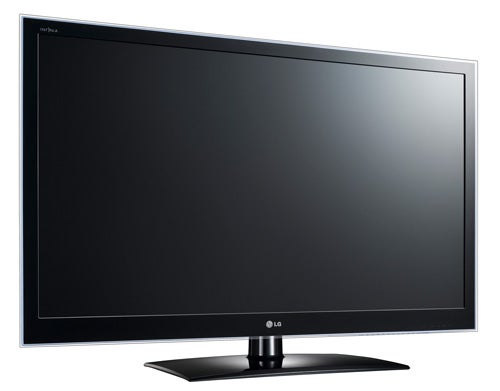 There really is something quite relaxing
about the 55LW650T’s approach to 3D. It just feels less tiring on your eyes,
particularly if you have high ambient light levels in your room (which can
show up active 3D’s flickering issue). The 3D image also looks brighter than
most, if not all, active 3D pictures, and is also reasonably clean – so long as you’re watching from a sensible viewing distance and angle.

Get too close to the screen – which is quite easy to do when the
screen’s as big as this one – and you start to see horizontal black lines
running across the 3D picture and become aware of a quite jagged look to
contoured edges. This latter issue is actually visible from quite distant
viewing positions too.

When it comes to the most strongly debated aspect of FPR/passive 3D -
resolution – the 55LW650T’s news is mixed. For while its 3D pictures do somehow
manage to look higher in resolution than the mere standard definition picture
you might expect, 3D Blu-ray discs and even Sky side-by-side broadcasts
definitively do not look as detailed and sharp on the 55LW650T as they do on
the Panasonic P50GT30. And we can say this with confidence because we’re
looking at a split 3D signal running on both screens simultaneously as we write
these words.

The slight lack of detail is no surprise, regardless of how
much LG tries to argue that its FPR tech delivers a full-HD 3D image. What
definitely is surprising though is that the 55LW650T’s 3D images aren’t totally
free of crosstalk. On many occasions parts of the 3D image looked slightly
shimmery and indistinct. This isn’t quite the same as the very clear double
ghosting of active 3D crosstalk perhaps, but it’s still quite distracting when
you see it. 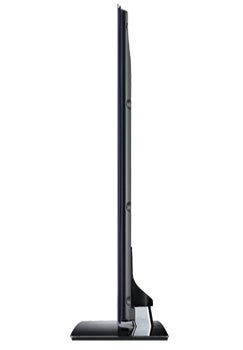 The 55LW650T’s pictures also explode into serious double imaging crosstalk if
you have your head at an angle of more than just 10 degrees or so above or
below the screen, while viewing from down the TV’s sides both reduces the 3D
effect and makes the picture appear ‘wavy’ – presumably an artefact of the
pattern retarder on the screen’s front.

For all these numerous shortcomings though, we’d  argue
that provided you can sit

in a sensible position relative to the screen, the 55LW650T’s 3D images are
perfectly

engaging for a mainstream viewer. They just don’t have the precision demanded
by the enthusiast’s market. 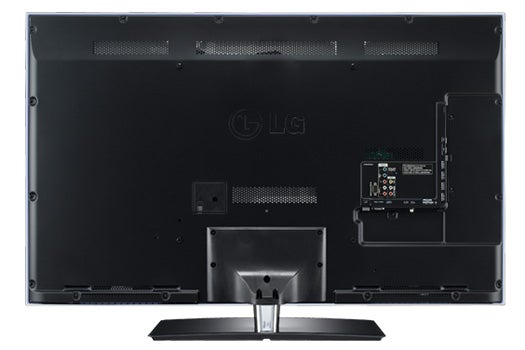 Our biggest issue with the 55LW650T is actually more
apparent with 2D viewing than 3D viewing, and takes the form of that old
familiar edge LED bugbear of an inconsistent backlight. Without the set’s local
dimming feature active, dark scenes look very inconsistent, with big and very
obvious patches of extra brightness in each corner, even with the backlight set
low.

Turning the local dimming engine on greatly improves this problem, but replaces
it with a different one – large and very noticeable chunks of extra brightness
around bright objects when they appear against dark backgrounds. To be fair you
might not notice any of this while watching pretty straightforward daytime TV fare.
But surely anyone buying a 55in TV is going to watch their fair share of films
on it, and chances are you’ll be bugged by one form of the backlight
inconsistencies or another at some point during any film.

In most other ways the 55LW650T’s 2D pictures are good.
Colours are rich and mostly natural with good blend subtleties, HD pictures
look sharp and detailed if very occasionally a touch noisy, and motion is solid
– though LG’s TruMotion system does throw up a few artefacts, and so should be
used sparingly. There is one final problem that will affect gamers, though. For
we measured an input lag of 101ms for the 55LW650T, even using the set’s
provided game preset. As you’d expect,

this translated into a pretty noticeable disadvantage when playing reaction-based
games, especially online.

Considering how bulky its bodywork is, the 55LW650T’s audio
is a disappointment. It’s clear and rounded enough with vocals to pass muster
with simple ‘talky’ programming, but there’s no bass to speak of and the
soundstage never manages to rise above ‘polite’ even during what should be
raucous action sequences.

While the 55LW650T doesn’t manage to convince us that passive 3D is actually
better than active 3D, its 3D images are nonetheless more relaxing to watch and
more than acceptable for the sort of casual, occasional use that’s likely to be
the basis on which many people watch 3D sources. It’s also impossible to deny the
attractiveness of the set’s price relative to active 3D sets, especially with
multiple glasses taken into account. All of which makes it even sadder that a
potentially very appealing 3D option is so badly let down by some fundamental
backlight problems.