Colour & Detail
In many ways, the LG 55LA860W’s picture quality is excellent. After a little tweaking, colour
fidelity seems very good, with superbly natural
skin tones but also a very vibrant palette – a combination which is
usually indicative of a TV that’s got more colour processing power at
its disposal than most. Oddly colours seemed more subtly nuanced than
they did on the 5tLA860W, even though we can’t find any obvious reason
for why this might be so.

Detail
levels are outstanding with good quality HD fare, too; for instance, you
can clearly see the individual fibres in the suits of the bank raiders
during the 70mm sequence at the start of The Dark Knight. With this
truly immaculate source, moreover, the set shows no signs of
over-keenness with its sharpness. In other words, there’s no trouble
with excessive grain or dot crawl, and edges look well-defined without
becoming ghosty or stressy.

Motion Handling
Motion is rather well handled too. The 800Hz-emulating screen with its optional TruMotion motion processing engine does an above par job of reducing judder and blur without causing nasty processing side effects or leaving the image looking too unnaturally fluid. So long as you stick with either the TruMotion system’s Clear setting or the User one with Judder and Blur reduction settings nudged down to four; muck about with any of the other settings or leave any of the noise reduction systems on and the image quickly degrades into smearing. So just take care.

In fact, with all the above points taken into consideration, we’d go so far as to say that it’s very rarely that a TV delvers such a strong balance of sharpness, resolution and noise handling with HD – and the obvious fidelity of the screen’s colour palette merely enhances the sense of utmost clarity.

When The Dark Knight returns to its normal non-70mm format, the image’s noise levels do increase quite noticeably, especially during dark scenes. Though to be fair, most of this noise is just the TV accurately picking up the extra noise in the source rather than anything the TV is doing wrong. 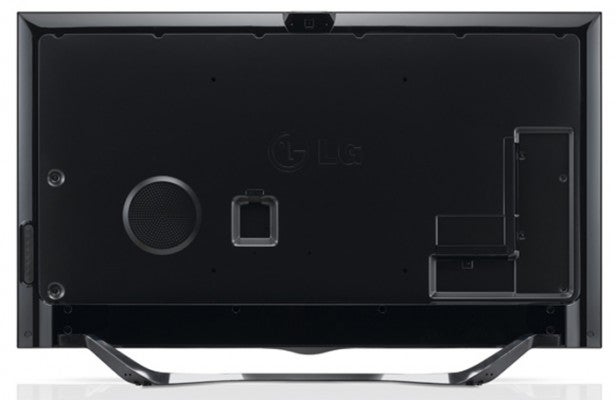 Contrast & Black Level
But for all these positives, there are three significant problems with the 55LA860W’s handling of
dark scenes. The main one is that the screen’s native contrast
performance really isn’t very good at all. Turn off the various contrast
boosting elements, including the local dimming, and dark scenes look
flooded with the dreaded grey mist we associate with low-contrast LCD
panels.

Not surprisingly, the screen’s inability to deliver
anything close to a deep, natural black colour makes dark scenes look
seriously unconvincing. Especially when considered against the
outstanding black level performances we’ve seen from a growing number of
rival TVs this year.

Calling into play LG’s local dimming engine instantly delivers a
considerable increase in the image’s black level depth. However, it also
gives rise to problem two: some pretty blatant backlight blocking
around bright objects. What we mean by this is that whenever a bright
object appears amid a predominantly dark image, you can clearly see a
rectangle of extra light running all the way down the image across the
area covered by the bright object.

It’s caused by the local dimming
system delivering higher light outputs from the LED sectors responsible
for the bright picture sections than it is from the LED sectors
delivering the rest of the image. It’s a common one
with local dimming when used in an edge LED scenario, especially where
the LEDs are arrayed – as they are on the LG 55LA860W – along the top of
and bottom of the screen rather than down the sides.

But the local
dimming machinations here some more pronounced and thus distracting than
usual, even if you only use the Low local dimming setting (the light
blocking effect becomes more exaggerated at higher settings).

The
final problem with the LG 55LA860W when showing dark material is that the
darkest parts of images tend to look pretty hollow, thanks to the way
shadow detail is crushed out of the image as it tries to compensate for
the TV’s core contrast problems by taking lots of light out of dark
parts of the picture.