The 55LA740V’s 3D performance is exactly what we would expect of one of LG’s passive 3D TVs. Which is in many ways great news, for it means you’re able to enjoy your 3D pictures with none of the fatiguing flickering you tend to get with many active 3D systems. Even better, there’s none of the crosstalk ghosting noise that can take so blight active 3D images.

Not having crosstalk also helps the screen delineate a winningly natural and immersive sense of depth and space; less brightness and colour saturation is lost from the 3D image than happens with the active system; and motion seems to us to generally be more comfortable to watch in the passive 3D world than it is in the active.

In short, it’s easy to see on the 55LA740V why passive 3D has become the most popular 3D TV technology with consumers.

The 55LA740V is not, though, immune to passive’s weaknesses. First, the set’s vertical viewing angle is very limited, as crosstalk suddenly becomes a big problem if you view from 13 degrees or more above or below the screen. Second, the 55LA740V’s relatively large screen also emphasises the appearance of visible horizontal line structure and jagged edges around the edges of sharply contrasting objects (such as the yellow text and floating lanterns on the main menu screen for the 3D Tangled Blu-ray).

This effect diminishes the further from the screen you’re sat, but this visible filter structure – along with a slight loss of resolution with the passive format – remains the main reason why some AV enthusiasts prefer the active 3D format.

You can even occasionally detect faint traces of the horizontal line structure of the 3D filter on the 55LA740V’s screen when looking at extremely bright parts of 2D pictures. But this may be something only a trained eye will see from anything like a sensible viewing distance. 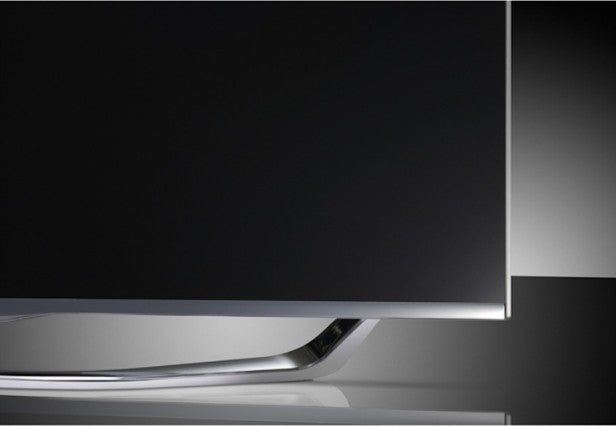 We have a couple more general flaws to report with the 55LA740V’s pictures before we’re done, though. First, while colours are intense and can be calibrated to look natural, they lack some blend finesse. This can lead some skin tones looking a little plasticky at times, and can even result in some quite strange ‘digitisation’ of backgrouind picture areas. Check out, for instance, the faces of Ron and Hermione as they stand in the background during Harry’s early chat with Griphook in the final Harry Potter film.

Finally – and pretty annoyingly considering we’ve been on at LG about this for years now – the 55LA740V is seriously uninspiring on the input lag front. We measured a 63ms delay in the screen producing its pictures, even when using the set’s Game mode and turning off as much video processing as we could. This level of lag can definitely have a negative effect on your console or PC gaming capabilities.

The 55LA740V’s sound is good by skinny TV standards. The combination of two potent 12W speakers and a large rear-firing subwoofer help the set deliver a soundstage big enough and dynamic enough to keep the large scale of the images company, while also avoiding those classic flat TV audio issues of thin-sounding action scenes and harsh, dislocated trebles.

If you’re interested in the very best picture performance and money’s no object, then we’d recommend that you ignore the 55LA740V in favour of one of the impressively numerous picture quality stars that have come our way this year – Sony’s 55W905A, Samsung’s UE55F8000 and UE55F7000, Panasonic’s VT65 models, or even, if you really feel like pushing the boat out, £4000 Panasonic’s P60ZT65 or the also-£4000 Sony KDL-55X9005A 4k-resolution superstar.

The 55LA740V is also not an ideal option for serious gamers on account of its relatively high input lag.

Where the 55LA740V saves its own bacon, though, is with its price. For £1450 doesn’t seem an unreasonable amount at all to stump for a 55in set with good sound, middling pictures and a mostly excellent smart TV interface.

Although it’s nothing special on the picture quality front by 2013’s frighteningly high standards, LG’s 55LA740V is cheap enough, loud enough, pretty enough and clever enough (with its Smart TV interface) to still warrant an audition if you’re after a 55in LCD TV for less than £1500.