Update: LG has confirmed that the LG 55in OLED TV will be available to order from July, will ship towards the end of the year, and is priced at “around 9000 Euro”. This naturally squeezes its target audience into an elite of the rich and famous – it probably won’t be littering the shelves of PC World any time soon. 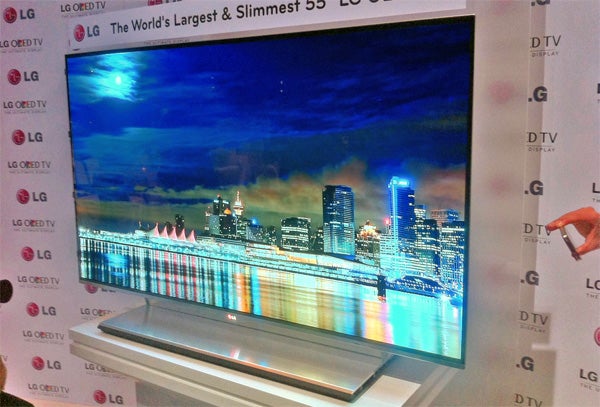 We also got a closer look at how the TV will actually work. An incredibly thin and light television – the thinnest and lightest OLED TV this size in the word according to LG – none of its connectors spring out of the panel itself. Instead, the substantial metal base takes on all of these duties. As you can see in this picture, the power and video connectors are found at the rear of the base, ensuring that the panel itself can stay impressively thin. 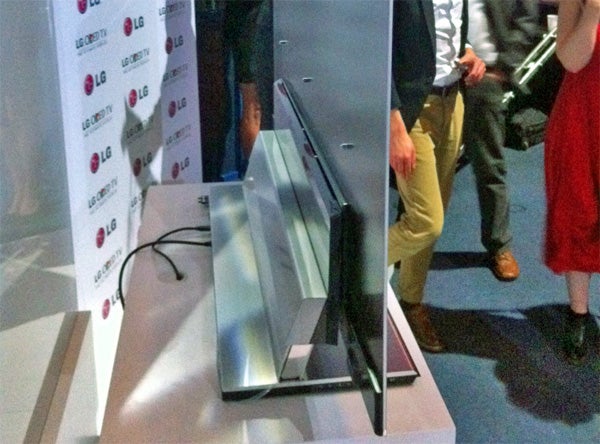 But that’s enough about the practicalities of such a skinny set – you can read our full preview from CES below, complete with how this impressive set performs.

For years now, OLED technology has been hanging around onthe periphery of the TV world like some kind of AV Shangri-La. It’sconsistently ‘stolen’ any shows it’s appeared at, and has even found its way tomarket a couple of times (if costing thousands of pounds for sub-15in screensizes can truly count as ‘coming to market’).

But finally, at this year’s Consumer Electronics Show (CES)in Las Vegas, OLED technology has truly come of age, with not one but two 55inOLED TVs unveiled that are actually both set to go on sale before the end of2012. 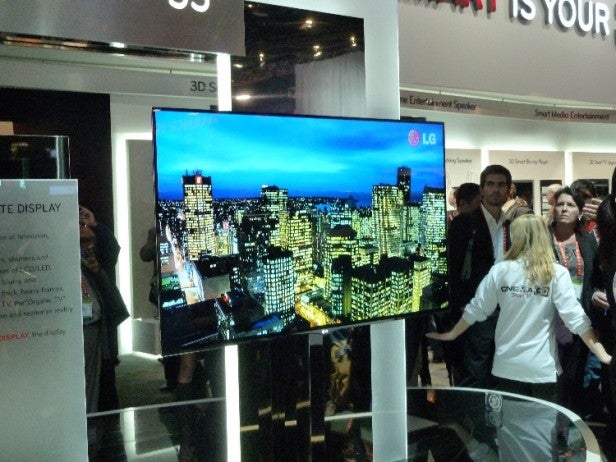 The first of these is LG’s EM960V. And we have to say thatit’s a startlingly ‘serious’ bit of kit, looking both better and more completethan we’d expected.

Its design really is pretty extraordinary. We’re used to theidea of OLED TVs being skinny, but the impact of barely 4mm of rear stickingout from the back of the EM6902’s 55in screen has to be seen to be believed. Itseems an almost impossible design – and so not surprisingly it generated themost ‘oohs and aahs’ (not to mention crowds) of any product at the entire CES.

The product’s front continues to fire the imagination thanksto a tiny ‘barely there’ bezel and glorious single-layer finish. It also turnsout that the EM6902 weighs just 7.5kg – remarkably little for such a hugescreen. 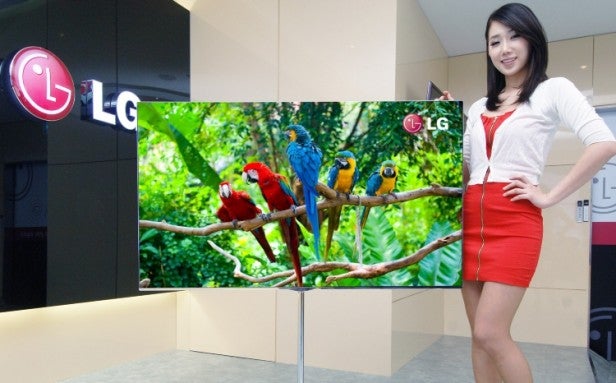 The only concern we have about the design is that LG hadposted ‘guards’ around the screen to forcefully restrain anyone who dared toget too close to any of the OLED screens, making us wonder how robust the bodyworkis.

LG was showing a decent selection of material on its screensto help us evaluate the EM6902’s performance capabilities – and we have to say wewere enormously impressed with what we saw.

Particularly stunning was some footage of a night-timecityscape of Vancouver, which did a mesmerizing job of highlighting thescreen’s stunning black level response, enormous and natural colour range, andbest of all its ability to show dazzlingly pure and bright whites rightalongside the inky blacks. It’s no surprise that LG quotes a contrast ratio of100,000,000:1 for its OLED showstopper.

Once you’ve recovered from this initial quality shock – ashock made all the more impressive when you consider that the OLED TV iscompeting with the harsh lighting of a show floor environment – you also startto notice all the immense subtleties in the OLED picture. Shadow detail levelsare remarkable for a flat TV technology for a start, as is the extent of thescreen’s colour gamut and the seemingly effortless sharpness and amount ofdetail the picture delivers from a normal HD signal. 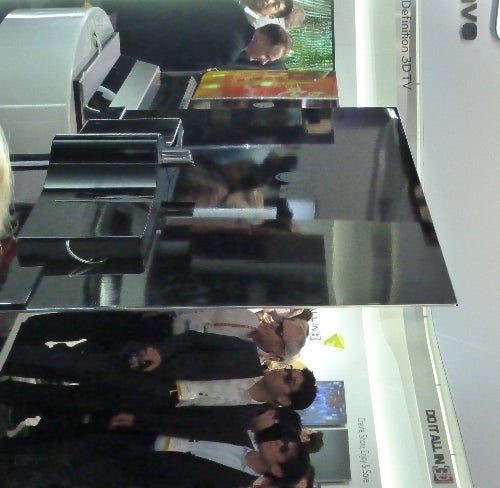 There are a couple of concerns with the LG EM6902, though. First,there’s its use of passive 3D technology. For while we have no objections tothis in principal, as with other 55in passive 3D screens we did noticehorizontal line structure caused by the filter on the screen over small, verybright areas. And 3D pictures don’t look quite as pristine and sharp as theycan with a strong active 3D screen.

There was also some crosstalk with 3D content, though ourexperience with the usually low-crosstalk passive 3D technology suggests thatthis crosstalk had more to do with the stupidly over-deep 3D content LG wasshowing than any issues with the TV.

Finally in the negative column, the glossy screen on thefront of the TV is rather reflective of light (though of course, this is beingreported from the extremely bright environment of a show floor), and we spotteda curious ‘seam’ in the picture about half an inch from the top of each of the OLEDscreens on show.

It would be ridiculously unfair to dwell on these issues though,especially given the preproduction nature of the screens on show. Overall theperformance of LG’s OLED 2012 flagship was so strong that it arguably made theTV the single most exciting AV product from the entire show.

The TV will be available to order from July, with units shipping towards the end of the year. For more, check out LG’s webpage.