If you’ve read my reviews of LG’s other OLED TVs this year, you can pretty much port over my picture quality findings for those sets into this review. Which is for the most part great news.

As discussed earlier, OLED’s strengths come from the fact that each pixel produces its own light and colour. This results in – for the most part – simply incredible contrast performance.

Blacks actually look black, as opposed to a shade of grey seen on LCD screens. Even the best plasma TVs weren’t able to deliver black levels as deep, natural and noiseless as those you get from the 55EG920V and its OLED siblings. Making the depth of the 55EG920V’s black colours even more remarkable is their ability to share not only the same frame, but even the same areas of that frame with bright, punchy picture elements. In fact, you can have a bright, pure white picture element sitting just one pixel away from a completely black element without any issue.

This juxtaposition seldom happens with typical video content, of course – starry skies are probably the best example of it in action. Nevertheless, OLED’s contrast impact still makes its presence felt in nearly every frame.

By comparison, shots containing a mix of very bright and dark content on LCD screens always see a compromise of some sort, either in the form of grey blacks or muted brights. This is down to the fact that the available light sources have to be shared across multiple pixels.

The 55EG920V’s self-emissive pixels also ensure that colours enjoy a phenomenal sense of vibrancy. This remains in place during dark scenes too.

While this may give the impression that the 55EG920V’s colours are at least as vibrant and rich as those of the very best LCD screens, in reality, some LCD screens are capable of achieving levels of brightness and a range of colours beyond anything OLED can currently accomplish.

Such limitations have led some to suggest that OLED isn’t suited to the enhanced brightness and dynamism of new high dynamic range (HDR) content. However, watching HDR on the 55EG920V suggest that things aren’t as clear-cut.

Indeed, the 55EG920V doesn’t present HDR with as much brightness as HDR-capable LCD TVs such as the Samsung JS9500 and Sony X8505C range. However, the fact that there’s a boost in the intensity of bright areas on the 55EG920V that isn’t accompanied by increases in backlight clouding and light “haloing” problems seen with all LCD TVs to date, is a joy to behold. 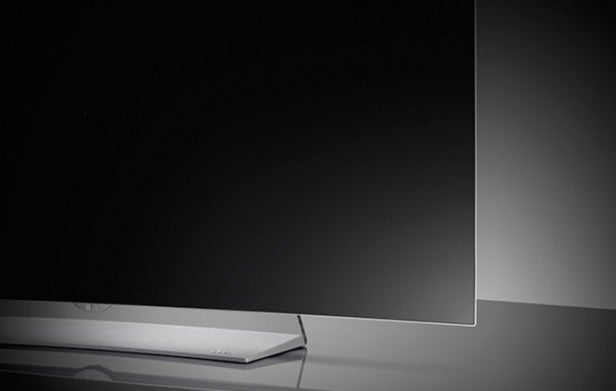 The 55EG920V does a lovely job, too, of delivering the extra detail, colour finesse and image depth we associate with good-quality 4K UHD screens. There’s no doubt that OLED technology’s ability to deliver light differences right down to pixel level has a part to play here.

Throw in the fact that you can watch the 55EG920V’s OLED screen from almost any angle down the side without it losing contrast or colour and it’s plain to see why OLED remains, for many, the next stage in TV evolution.

For all its near routine flashes of absolute brilliance, though, the 55EG920V isn’t perfect. For as well as its curved screen introducing a viewing angle restriction that otherwise wouldn’t exist, the 55EG920V suffers from the same curious lighting flaws that we’ve encountered on LG’s other OLED models this year.

First, the left and right edges of the image can look dimmer than the centre. This “vignetting” issue apparent all the time, but it can make its presence felt during particularly bright shots. Note that once you’ve encountered it, you’ll find yourself looking out for it again. 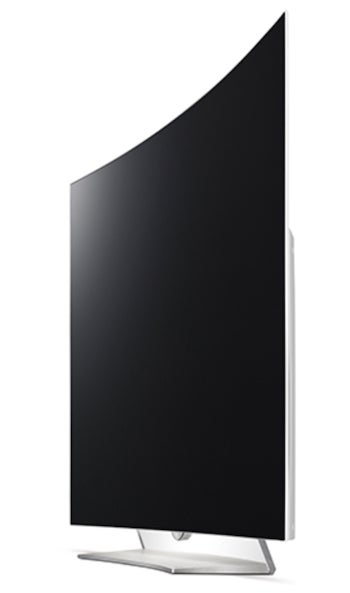 The other problem is that, on occasion, when the screen is asked to display the step from black to a grade/step above black, it makes a bit of a mess of it. The result is that it turns those usually inky blacks into a slight yellowy grey colour, with no subtle steps in between. You can limit this issue by keeping a lid on the image’s overall brightness as suggested in the setup section.

Other points to mention are that the upscaling of HD to 4K isn’t quite as accomplished as that of some rival TVs, and that the curved design can, as predicted earlier, cause any reflections to be distorted across more of the screen than would be the case with a flat TV.

But hopefully, such issues can be minimised through the positioning of the screen or by controlling your lights.

Used as the main TV for the review period
Tested for more than a week
Tested using industry calibrated tools, discs and with real world use
Tested with broadcast content (HD/SD), video streams and demo discs
Previous
LG 55EG920V Review Next
3D, Sound and Conclusions Review