The 55EG920V is so good with 3D that if it were witnessed by the majority, then the decline in its popularity would surely turn.

For a start, the passive 3D system used by LG results in essentially zero crosstalk ghosting noise. Although there’s been some talk of LG’s OLED TVs suffering with localised crosstalk – where certain areas of the picture show signs of the double ghosting issue – the sample I received looked immaculate over the entire expanse of the image.

Also spectacular by 3D TV standards is how bright and richly coloured such images look, with the passive glasses removing minimal brightness from the image. OLED’s talent for contrast also reaps dividends in 3D mode, helping it portray even dark scenes with a superb sense of depth.

While passive 3D technology can lead to a loss of detail when watching 3D Blu-rays on HDTVs, it works brilliantly on 4K UHD screens such as the 55EG920V, letting you see every pixel of detail from a 3D Blu-ray transfer (especially as there’s no crosstalk ghosting to get in the way).

The only issues with 3D playback are that crosstalk can go from zero to everywhere if your vertical viewing angle reaches beyond around 13 degrees, and that you can sometimes see a gap between the audio and video tracks. Fortunately, regarding this latter issue, LG has fitted the 55EG920V with an audio-timing adjustment that can add or reduce audio delay. I managed to fix the initial audio issues by setting this feature to its “-4” level.

The 55EG920V’s lack of a Harman Kardon sound system is pretty obvious. The TV sounds somewhat muffled and thin compared with the 55EG960V and 55EF950V models; neither voices nor treble details sound as clear and defined as they do on the best TV audio systems. Bass sounds thin too. 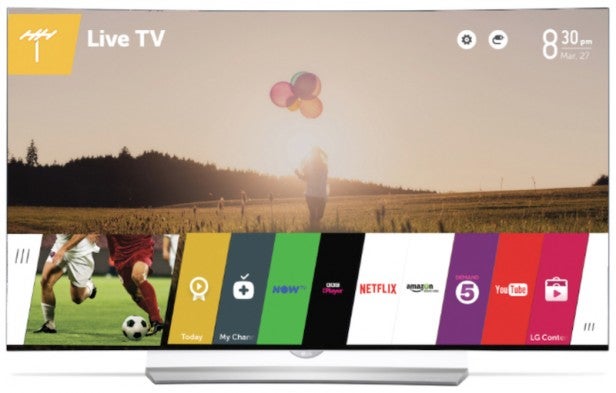 This isn’t to say the 55EG920V’s sound is a disaster. It’s serviceable for all but the biggest action scenes. But you probably will want to factor in some sort of external sound system not too long after you’ve invested in the TV.

If you’re keen on using the 55EG920V for gaming, then you’ll be please to know that it’s solid. Input lag measured a smidge under 50ms on average, which while not a bad result, is also 20ms or so higher than the 30ms figure I ideally look for from a TV. As such it could account for one or two of your deaths when playing Call Of Duty online.

Another thing worth mentioning here is the “magic remote” supplied with the 55EG920V. This lets you choose options on-screen just by pointing at them and pressing select, while a cool wheel arrangement lets you quickly scroll up or down the menus. Excellent.

If you’re a serious movie fan then you’re likely to value contrast above everything else, and if this is the case then you simply have to check out the 55EG920V. Its OLED technology delivers black levels to the likes of which you won’t have seen before – at a price that can’t be rivalled by any other 4K OLED TV yet.

Just be prepared for it not to be as bright as some of the LCD competition – especially if you’re taking care to limit the appearance of its occasional black level “blow outs”.

While LG hasn’t yet delivered perfection with its OLED TVs, the 55EG920V is still a simply amazing television for the vast majority of the time. Its contrast performance is peerless, its design is stunning, and considering how talented it is, it’s a pretty great price too.