The 55EC930V is a curved, 55-inch Full HD TV that gives us our latest opportunity to see how well LG is progressing with its bid to bring OLED screen technology to the masses. It certainly hits the ground running with its £2000 price tag – a pretty incredible price when you think where we were with OLED pricing just 12 months ago. Let’s hope LG hasn’t had to compromise the set’s performance to crunch the price so hard.

One of the many things to like about OLED technology is the way it seems to make it much easier to create gorgeous-looking TVs. The 55EC930V dutifully looks stunning with its combination of a gleaming, beautifully built super-thin curved 55-inch screen and suitably futuristic-looking silver stand. 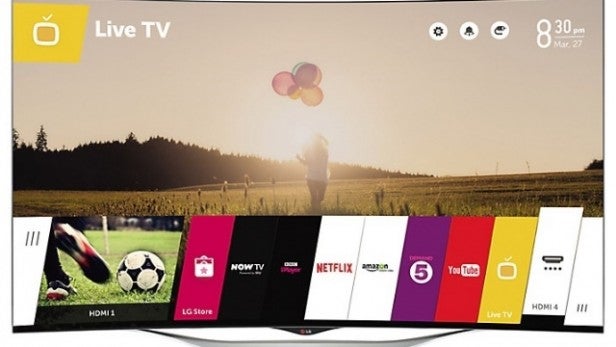 It should be stressed, though, that while the outside few inches of each edge of the panel are incredibly thin, the central half or so of the 55EC930V’s rear where the connections are housed actually sticks out quite a long way – further, even, than some current LCD TVs.

The curve, meanwhile, may not be to everyone’s taste, especially on a 55-inch screen where you and your family are more likely to run up against the geometry and, potentially, distorted reflection issues curved screens can cause. From a purely aesthetic point of view, though, being curved inarguably helps the 55EC930V look even more stunning.

It’s worth adding here that curving an OLED screen is much easier than curving an LCD TV. Partly because of all the layers that go into making the latter and partly because OLED’s self-emissive screen technology (more on this later) means you don’t have to fight the same light leakage problems that come up with curved LCDs.

The 55EC930V’s connections are impressive for a full HD TV, with highlights of four v1.4 HDMIs (one side-mounted), three USBs for multimedia playback or recording from the TV’s Freeview HD tuner, an RS-232 port, and pretty much inevitably these days both Wi-Fi and wired network connections. 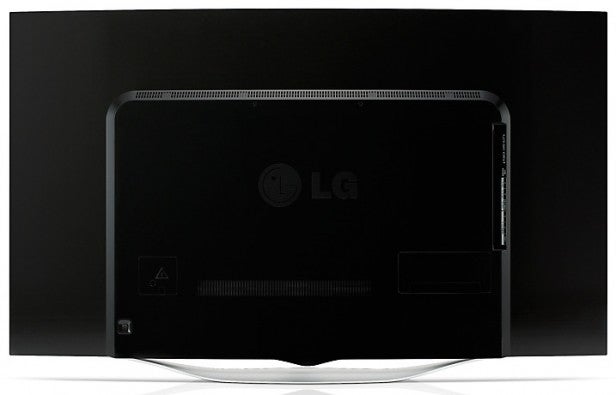 The 55EC930V’s network features include support for DLNA streaming as well as access to LG’s online smart TV platform. This platform is fairly strong from a content point of view, thanks to such big hitters as Now TV, Amazon, Netflix, the BBC iPlayer, and Demand 5 – though it must be said there are no ITV Player or 4oD apps.

The real star of the 55EC930V’s Smart features, though, is LG’s inspired webOS interface, whichbrilliantly turns everything into an app – even each HDMI input – for more intuitive integration into a gorgeously slick, intuitive and uncluttered GUI. Even the ‘Magic’ remote control, with its point-and-click approach, is a work of genius. For a more detailed examination of LG’s Smart TV prowess this year, check out our dedicated webOS review.

From both the many demos we’ve had of OLED screens over the years and the LG 55EA980W we tested earlier this year, we’ve developed a serious crush on OLED’s picture quality potential. So let’s quickly remind ourselves of what it is about OLED that’s got us so excited.

Its most important trick is that it enables every single pixel in the 55EC930V’s pictures to produce its own luminance level – a talent LG cheekily refers to as ‘pixel dimming’ to highlight the relative lack of precision in the ‘local dimming’ lighting systems some high-end LCD TVs employ. This level of light control has an astonishing impact on contrast compared with screens that have to ‘share’ external light sources between their pixels – all the OLED screens we’ve seen have effortlessly delivered black levels so great that they even make the best plasma technology look washed out.

The ability of each pixel to produce its own light also removes pretty much all of the viewing-angle constraints you get with LCD technology – though the curved screen introduces a few viewing-angle limitations of its own, ironically. Meanwhile the combination of OLED’s stunning black-level potential and, according to LG, the WRGB colour system the 55EC930V uses, promises an explosively vibrant but also realistic colour performance.

As we’d expect of a high-end TV from LG, the 55EC930V is well stocked with picture-calibration tools. There’s colour and gamma management, the facility to adjust the intensity of the light output from the OLEDs – similar to the backlight adjustment on an LCD TV – and an interesting colour-temperature adjustment with a numerical scale offering many more options than the usual cool, neutral or warm.

There are also loads of processing options, including a Dynamic Contrast system, a Colour Extension Engine, a Super Resolution sharpness booster, both standard and MPEG noise-reduction tools, and LG’s TruMotion processing for sharpening up moving objects.

Some of these tools feel likely to be of less value here than they would be on a normal LCD TV thanks to OLED’s innate image characteristics. Also, we have to say that not all of the calibration options delivered the sort of straightforward results we’d normally have expected – as if, perhaps, one adjustment was knocking on into other areas of the picture it should have been kept separate from.

We still welcome the flexibility on offer, though – even if, when it comes down to it, many people will feel they’d rather just stick with the TV’s picture presets. Or else call in a professional calibrator, given that the TV is backed by the Imaging Science Foundation (ISF).

Even if you stick with relatively straightforward picture adjustments there are a few quirks related to the OLED nature of screen. The most surprising one was that we felt much more inclined to use the two noise-reduction options when watching standard-definition (but not HD) digital broadcasts than we usually would.

We recommend turning off the Dynamic Contrast system for reasons we’ll discuss later, and we felt the need to use LG’s TruMotion processing to stop the image losing clarity over motion. Alhough we’d only recommend the latter’s Clear setting or a custom one with the judder and blur elements set to 2 or 3, as anything higher can cause some slight artefacting when worked hard.