Chocolate is one of our favourite things. We can’t get enough of the stuff and we really don’t like its name to be taken in vain. So our relationship with LG’s ‘Chocolate’ 50PB65 50in plasma TV gets off to a decidedly rocky start when biting enthusiastically into a corner of it gives us nothing but toothache for our trouble. Hmm.


Turns out that what LG means by the ‘Chocolate’ theme is that the 50PB65’s design is inspired by the brand’s iconic – well, that’s how LG describes them, anyway – Chocolate mobile phones. Ah. Silly us. But then to be fair to ourselves, the supposed Chocolate phone aesthetic inspiration is, in our humble opinion, hardly blindingly obvious. Yes, OK, there’s a tiny bit of the Chocolate phone design in the TV’s use of small red and green LEDs around the TV’s edges and the overall styling is reasonably comely. But ultimately it just looks like yet another glossy black TV rather than anything truly haut couture. In fact, it’s rather bigger and fatter than many of its rivals and that certainly doesn’t follow the Chocolate mobile styling. 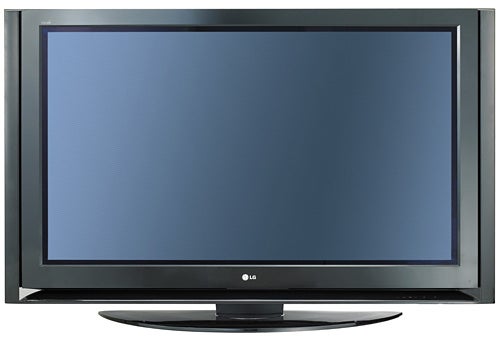 In other words, the whole Chocolate thing seems more of a marketing notion than anything particularly ‘real’, so let’s leave it firmly behind and focus on what the TV actually DOES offer – hoping as we do so, that the Chocolate marketeering hasn’t been created as a smoke screen to hide a performance deficiency or two.


Connections are reasonably plentiful for a 50in TV available for as little as £1,102 (a figure that wouldn’t look out of place on a 42in screen, never mind a 50in one). Two HDMIs and a component jack do HD video duties, plus there’s a D-Sub interface for analogue PC hook up, a pair of SCARTs, a CI slot that immediately alerts us to the presence of a built-in digital tuner and last but not least a digital audio output that lets you pipe out to an AV receiver digital audio tracks taken in via the HDMI inputs.


The HDMIs have a couple more tricks up their sleeves too, namely an ability to let you operate compatible LG source gear such as a DVD player via the TV’s remote; and compatibility with the 1080p/24fps HD image format that’s become such a hot topic since film studios started using it to encode movies onto HD discs.

Turning now to the screen’s key specifications, we find a pretty standard native resolution of 1,366 x 768 and a far from standard claimed contrast ratio of 15,000:1. This is a remarkably high figure and promises precisely the sort of combination of dynamic colours and, above all, deep black levels that we love to see on a TV.


Also boding well for the 50PB65’s chances are its use of Faroudja’s renowned DCDi image processing – a deinterlacing system known to significantly reduce the appearance of jaggedness over contoured edges in the picture. Plus you get LG’s proprietary XD Engine video processing with its focus on improving noise levels, brightness, contrast, clarity and motion. And last but not least the 50PB65 sports 100Hz processing, which doubles the usual 50Hz frame rate in order to make motion look smoother and crisper.


This is the first time we’ve seen 100Hz on a plasma TV and to be honest we’re not sure we entirely see the point of it. After all, while 100Hz can certainly considerably improve the appearance of motion with LCD technology, plasma technology doesn’t suffer with LCD’s serious motion reproduction issues. In fact, given that some 100Hz engines can actually throw up pretty unpleasant processing side effects, we can’t help but be worried that the inclusion of 100Hz on the 50PB65 might actually make its pictures worse rather than better. 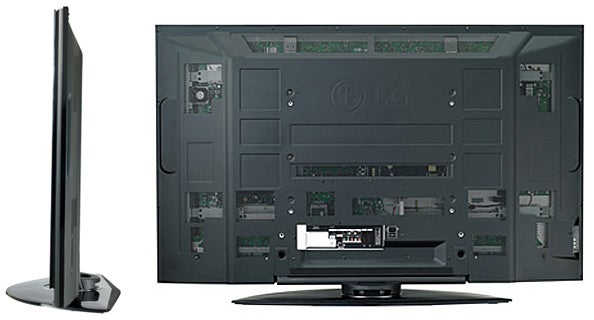 One final trick up the 50PB65’s sleeve is something called Clear Filter Pro. Like Pioneer’s Direct Colour Filter technology, Clear Filter Pro replaces the usual thick glass panel frontispiece of traditional plasma TVs with a thin filter arrangement to: a) do away with the secondary image you can often see when viewing traditional screens off axis; and b) reduce onscreen reflections (by as much as 30 per cent according to LG’s press blurb).


For a screen that talks such an impressive talk, the 50PB65’s pictures have to class as a real disappointment – especially as we’re witnessing them soon after seeing some stellar plasma efforts from Samsung and Panasonic.


Particularly galling is the screen’s relative lack of black level depth. Dark scenes, like pretty much any part of the aptly named The Darkness on the Xbox 360, are beset by a grey pallor over everything that’s supposed to look black. Not surprisingly this doesn’t help the picture look particularly believable or dynamic, plus it tends to flatten dark scenes out and hide background details.


This is hardly what we’d expect to see from a TV claiming a 15,000:1 contrast ratio and it proves once again that manufacturers’ specification claims really do sometimes have to be treated with a hefty pinch of salt.

Also troubling are some of the colour tones. During the Mines of Morir sequence in The Fellowship of the Ring, for instance, the skin tones on show often look decidedly odd, making Gandalf look more like a tramp who’s necked a few too many beers than a prodigiously powerful arch-wizard.


Finally in the negative column, our 50PB65 suffered quite markedly with image retention, where residuals of particularly bright image elements stay ‘live’ on screen for a good number of seconds after they’re supposed to have disappeared. It’s possible this problem will reduce over extended use, but that doesn’t make it any less annoying in these days where practically every other plasma TV around has largely eradicated the problem. 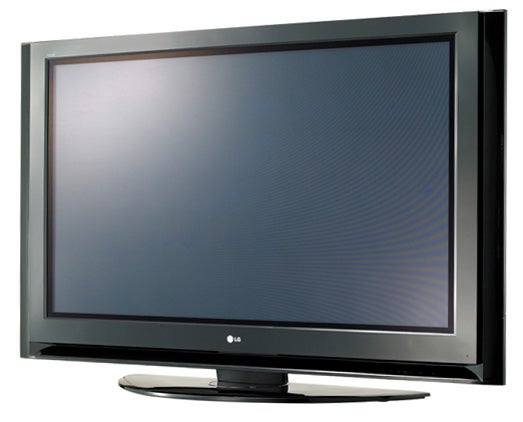 The 50PB65 is not unremittingly bad. In its favour is the sheer aggressiveness of its picture presentation, achieved by a retina-singeing combination of extremely high brightness (by plasma standards) and remarkably full-on colour saturations.


The 50PB65 also achieves its colour vibrancy without succumbing to the sort of ‘striping’ of colour blends still sometimes seen in the plasma world, and it portrays moving objects without plasma’s common dithering noise problems. Moving objects enjoy plenty of clarity, stability and smoothness too, making us wonder if using 100Hz on a plasma TV isn’t as crackpot an idea as we thought.


Furthermore, a meaty soundtrack, such as the gloriously OTT effort which accompanies Con Air on Blu-ray, reveals that this LG makes good use of its chassis bulk in reproducing a wide, powerful, dynamic and clear soundstage.


With its tiny price, reasonably glam looks and spicy features count, we really, really wanted to love this LG TV. But ultimately no amount of clever marketing, competitive pricing or aggressive picture traits can hide the fact that when it comes to all-round picture quality, there are plenty of rivals out there that do it considerably better.