We’ve said it before and we’ll say it again: making a TV really, really skinny is all well and good so long as it doesn’t lead to major compromises in picture quality. After all, for the vast majority of the time you’re looking at a TV’s front, where its pictures are, rather than its rear. So frankly we don’t give a monkey’s if a TV’s posterior is a Vanessa Feltz or a Pippa Middleton, so long as what comes out the front hits the spot.

You probably won’t be too surprised from this introduction to hear that LG’s 47LM960V falls foul of our dislike of ‘style over substance’ TVs. Though it must be said that its style is truly exceptional! For despite using direct LED lighting – where the LED array sits behind the screen – rather than edge LED lighting, the 47LM960V delivers a bezel so skinny at under 4mm that you can barely see it, and a rear that sticks out just 38mm. Truly stunning. 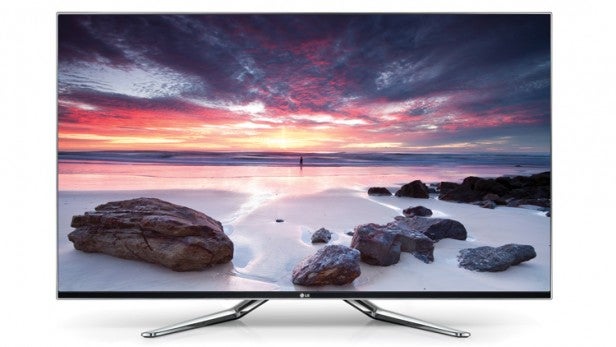 The 47LM960V’s rear depth is barely half that of a typical direct LED TV, and is achieved thanks to LG’s Nano technology, whereby a diffusion sheet is introduced in front of the LED lights so that they need less throw distance to illuminate the screen.

However, it seems to us that it’s also this Nano technology that’s chiefly responsible for the feelings of disappointment we’ve felt with the 47LM960V’s picture performance.

Here’s the deal. Usually when we test a direct LED TV rather than an edge LED TV, we expect that set to deliver as pretty much its main picture starting point a superb black level response. After all, the most obvious advantage of going the more expensive direct LED route is that it can give you true local dimming, whereby the light levels of different parts of the image can be adjusted on a much more local and therefore accurate basis than is possible with edge LED lighting. 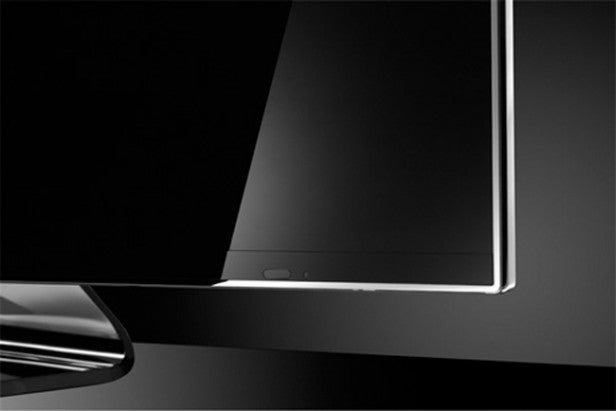 This should result in a much richer contrast range and much deeper black levels than you can get with any edge LED TV. Yet on the 47LM960V, this just doesn’t happen. During very dark sequences the 47LM960V’s pictures look rather grey and noticeably low on shadow detail, meaning that you can find yourself squinting to try and pick out even key picture information at times. Given that LG’s set does definitely feature local dimming, we have to think that it’s the light diffusing sheet the 47LM960V uses that’s causing the TV’s contrast performance to suffer.

Tellingly we’ve actually seen edge LED TVs produce better black level performances than the 47LM960V. The Sony 46HX853 delivers far more convincing dark scenes than this LG set, for instance, despite costing a massive £900 less. Come to think of it, we felt more satisfied with the black levels from LG’s own mid-range LM660 and LM670 models than we do with those from the 47LM960V. Which isn’t exactly great news when the 47in 47LM960V costs not far shy of £2,500.

To be fair to the 47LM960V, aside from failing to live up to expectations with its black level response, it’s a very polished performer. Its local dimming system does at least work to the extent that it allows very bright parts of the image to look punchy and dynamic in a way that arguably only Philips’ high-end direct LED TVs can rival.

It’s also a relief to note that LG has hugely improved the ‘haloing’ and ‘banding’ problems caused by the local dimming functionality on last year’s Nano sets. In fact, we hardly spotted any rogue light spillage at all around bright objects for the vast majority of our viewing time. 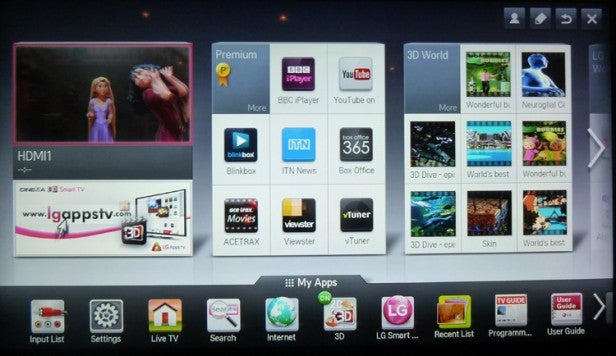 Colours, meanwhile, are rich, cover a huge gamut, and are also reproduced with impressive subtlety and blend finesse. Again, we’re not sure the 47LM960V quite rivals the efforts of the Sony 46HX853 where colour subtlety is concerned, but it’s certainly outstanding by any most standards.

The 47LM960V handles motion very well too. Its more advanced picture processing means there’s less resolution loss with motion than you get with LG’s otherwise very accomplished LM660T and LM670T sets, and the processing also delivers its judder and blur-removal benefits while generating less unwanted side effects – certainly so long as you stick with one of its Clear modes rather than going for anything more heavy duty.

The clarity of the 47LM960V’s motion handling plays a part, too, in how stunningly crisp and detail its HD pictures look, aided and abetted by the quality of the set’s general image processing and, we suspect, by the ability of the local dimming system to ‘push’ bright parts of the picture extra hard.

So far we’ve been talking about 2D pictures, but if anything the 47LM960V is even more enjoyable with 3D. The set inevitably uses LG’s passive system rather than the rival active one – a fact which results in five pairs of free 3D glasses, and 3D pictures which are brighter, more colour-rich, less flickery and much more relaxing to watch than their active counterparts. 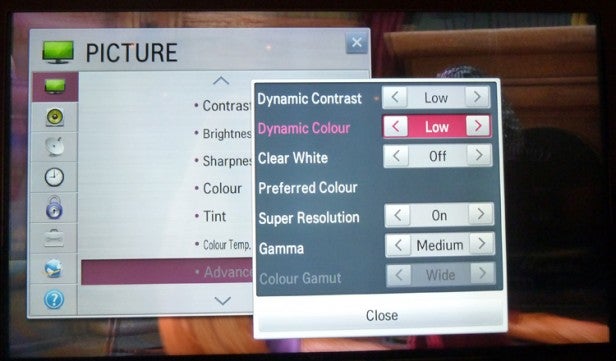 They also suffer less with crosstalk ghosting noise than those of the majority of active 3D sets, so long, at least, as you don’t have to watch from a vertical viewing angle of more than around 13 degrees. The marginal dimming effect of the passive 3D glasses even means that you feel slightly less aware of the 47LM960V’s black level limitations than you do while watching 2D.

The 47LM960V isn’t immune to passive 3D’s weaknesses, namely the appearance of some line structure and jaggedness over small bright objects or around bright curved edges, and a marginally less textured and dense look to passive 3D images than active ones. But for many people passive’s advantages will likely prove irresistible.

Interestingly, the 47LM960V doesn’t just ship with five pairs of normal 3D glasses. You also get two pairs of ‘dual play’ glasses, which allow each wearer to see just ‘half’ of a 3D image so that it’s possible for two players to enjoy simultaneous full screen gaming on the same TV so long as a game supports the feature.

Turning next to standard definition pictures, while they’re perfectly enjoyable on the 47LM960V, they’re not converted to the screen’s full HD resolution with quite as much precision and noise suppression as you see from rival top-end sets from Samsung, Sony and Panasonic.

It occurs to us at this point that our urge to get our Nano-related contrast moan off our chest right at the start of this review means we haven’t yet given any serious scrutiny to the 47LM960V’s other features. So let’s quickly cover the key points. 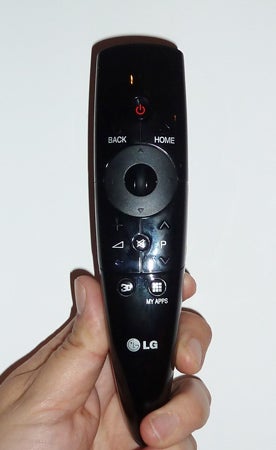 Connections are expansive, with four v1.4 HDMIs, three USB ports and built-in Wi-Fi leading the way. The set supports DLNA networking and, of course, can be taken online with LG’s exceptionally content-heavy Smart TV service. It remains the case that around three quarters of the apps available here are utter rubbish, but that still leaves 20-30 that offer plenty of goodies – including lots of streamed video.

Also worthy of note are the TV’s extensive picture calibration tools and ensuing endorsement by the Imaging Science Foundation, and LG’s superb operating system. The onscreen menus are well organised and look glorious in full high-definition, while the so-called Magic remote LG supplies alongside its standard handset offers a really intuitive ‘point at the right part of the screen and click’ alternative to the normal boring cursor control buttons. 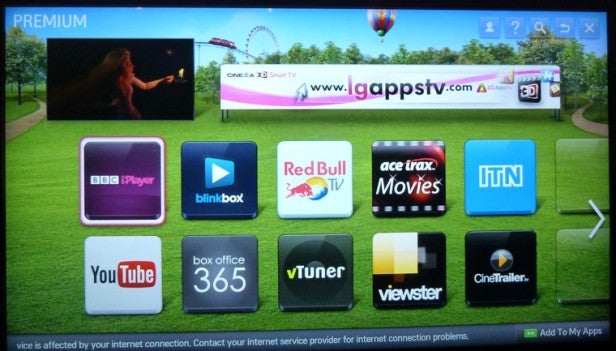 To wrap up, there are two further performance points to cover – one good, one bad. The good one concerns the 47LM960V’s audio, which while hardly ‘hi-fi’ in nature is considerably better than we would have expected from a TV with such a stunningly skinny chassis. The soundstage avoids the thin, harsh tone that usually arises when speakers don’t have any room to work with, while action sequences even benefit from that rarest of skinny TV commodities, a bit of bass. Doubtless this surprising degree of audio success is down to LG’s inclusion of a large, rear-firing speaker on the 47LM960V’s back.

The final chink in the 47LM960V’s armour, meanwhile, is an all-too-familiar one with LG TVs: input lag. For the past couple of years we’ve consistently found LG TVs taking as much as 100ms to produce their pictures on screen after receiving them from their various sources. And you don’t need to be a rocket scientist – or Call of Duty obsessive – to realise that a delay of this magnitude can severely damage your console or PC gaming performance. By comparison, most rivals TVs keep input lag down to 40ms or less. 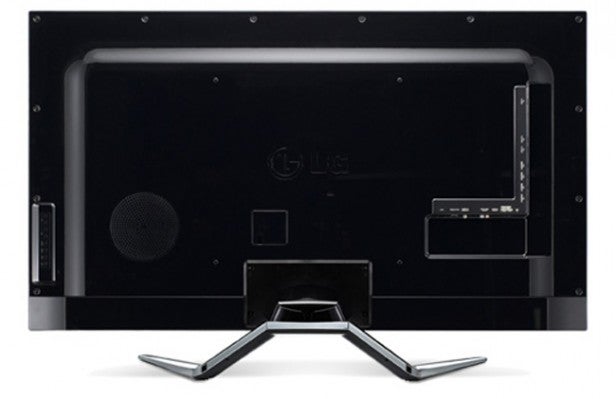 Verdict
Having been thoroughly impressed by LG’s latest round of mid-range TVs, we had hugely high hopes for its flagship LM960V series. But sadly the quest for fashionable slimness seems to have ended up compromising the 47LM960V’s picture quality in the very area – contrast – where we’d most expected its direct LED engine to shine. A fact which also ends up making its £2,350 asking price look very high indeed.