With LED very much the buzzword of the day right now – well, a close second to 3D, at any rate – it’s no surprise to find LG jumping on the bandwagon in no uncertain terms with a new 42in model, the 42SL9500.


As becomes immediately apparent from its extravagantly slim design, the 42SL9500 – which is exclusively available from Dixons/Currys/PC World – plumps for the edge LED approach rather than the direct LED alternative.


As we’ve noted in numerous previous LED reviews, traditional thinking has it that the edge LED approach represents a design-led compromise over the direct approach, largely on account of direct LED’s use of local dimming, where localised areas of the picture can have their light output adjusted.


But this hasn’t stopped edge LED TVs enjoying considerable commercial success – so much so that LG’s notoriously fleet-footed Korean rival, Samsung, has felt happy enough with sales to stick with the same edge LED TVs since last spring, rather than refreshing the range every few months like it usually would. 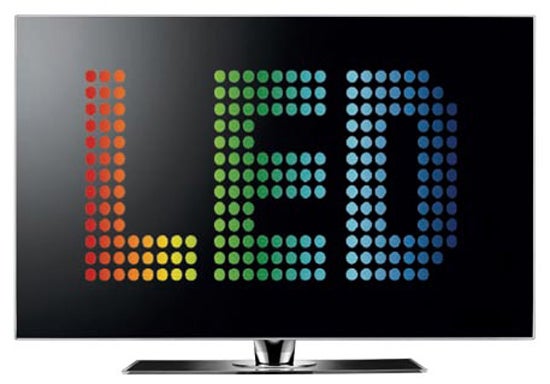 It’s important to add, too, that Samsung has been pretty aggressive in pushing the argument that the edge LED approach actually has some advantages over the direct LED approach – not least the fact that the edge LED system can potentially deliver better shadow detailing, since direct LED systems don’t have anywhere near as many individually controllable LED arrays as there are pixels in the picture.


For a much fuller discussion of the direct/edge LED debate, I refer you back to our review of Samsung’s UE46B8000.


So much for the 42SL9500’s technological justification. Time we got stuck into the actual product, to see how it holds up against the rest of the LED world.


It certainly makes a good case for itself aesthetically. The fact that it’s just 29.3mm deep makes an instant impact, shaving even a fraction of a millimetre off Samsung’s edge LED efforts! But it’s also distinguished by its ‘seamless’ design, where the screen and bezel exist in the same, glass-like plane. As a side note here, it’s nice to see that LG in the UK has quietly started referring to the design as seamless rather than sticking with the original, utterly misleading ‘borderless’ description we’ve mocked before.


The 42SL9500’s black colouring and very robust finish also bode well, and there’s a subtle pattern in the finish of the fascia and stand that distinguishes it from LG’s SL9000 range. The 42SL9500 also features a straight stand ‘neck’ rather than the 42SL9000’s angled one.


It’s hard to imagine anyone not liking the 42SL9500’s design, especially considering that the opulent look is attached to a price tag of £940 that looks pretty good value by current edge-LED standards.

Of course, though, while £940 might be cheap by edge LED standards, it’s actually pretty steep for a 42in TV by the standards of the LCD world as a whole. So it’s as well that the 42SL9500 has also got plenty of appealing specs to shout about.


Not least among these is the set’s huge claimed contrast ratio of 3,000,000:1, and its carriage of 100Hz processing for improved motion reproduction.


The set has a couple of neat multimedia talents, too. Specifically playback of JPEG, MP3 and DivX (including HD) files through a provided USB port, and Bluetooth connectivity. This latter tool, still unique to LG in the mainstream TV world, has two uses. First, it permits you to stream photographs stored on a Bluetooth phone wirelessly onto the TV screen. Second, it lets you listen to the TV’s audio on a pair of wireless Bluetooth headphones.


Luddite curmudgeon that I am, I’m not sure I personally envisage myself using either of these Bluetooth features much. But then I famously once also declared that texting from mobile phones would never catch on either. Doh. 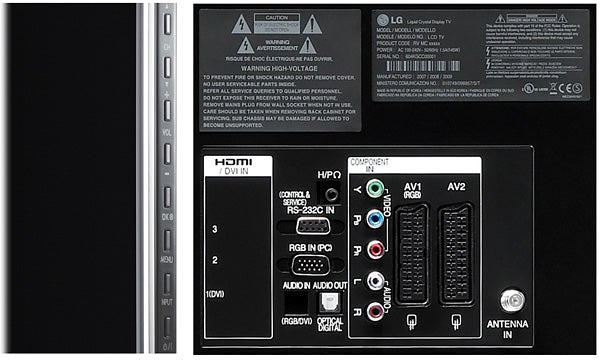 Even the most dedicated of Bluetooth lovers, though, shouldn’t allow their buzz over finding Bluetooth support on the 42SL9500 blind them to the fact that the set isn’t quite as multimedia savvy as it might have been. For it doesn’t join the growing band of TVs – including Samsung’s 7000 and 8000 LED series – that support online connectivity and streaming of files from DLNA PCs.


At which point it’s probably worth reminding ourselves that the 42SL9500 really isn’t expensive for a slinky edge-LED TV, and so probably couldn’t be fairly expected to carry everything its costlier rivals do.


At least it’s got a decent bit of ‘general utility’ processing in the form of LG’s own XD Engine system, as well as a handy suite of four v1.3 HDMIs.


I have to say, though, that it might have been nice if more of the provided connections had been positioned for sideways access. After all, a TV as slim as this has great appeal as a wall hanging option, yet having SCARTs, HDMIs, the power cable and so on sticking straight out of the back of the TV makes wall hanging much trickier. Samsung’s 7000 and 8000 TVs have many of their key connections set for sideways access, meaning the TV can hang much closer to the wall, thus preserving its sense of slimness without having to dig out cable channels in your wall plaster.


The 42SL9500 gets right back on track with its user-friendliness, though, once you explore its onscreen menus. For as well as being gorgeously and clearly presented, they also contain a winning degree of set up flexibility. Key options include a Picture Wizard tool that puts up a selection of picture test signals to help you calibrate the image correctly; a colour management system; gamma tweaking; and dynamic colour and contrast processing.


In fact, the 42SL9500 is so flexible that it has been endorsed by the Imaging Science Foundation (ISF), and carries two ISF options among its suite of presets.

With the exception of the flawed UE55B7020, Samsung’s edge LED TVs have made a good argument for the technology’s quality. And although not quite as awesome as the best of Samsung’s models, the 42SL9500 suggests again that LED really could mark the future of LCD technology.


For instance, the set produces pretty good black levels that are clearly deeper/less grey than those of even the finest of LG’s non-LED LCD TVs. During a run through of ”The League of Extraordinary Gentleman” on Sky Screen 1HD, I was thus sadly unable to be distracted by a lack of shadow detail in the film’s many dark backgrounds! Instead the shocking script, crap acting and lumpen direction were just as apparent during dark scenes as they were during bright ones.


The 42SL9500 also manages to retain intact LG’s long-running reputation for extreme brightness with its LCD TVs. Colours look dynamic and vibrant, and although the TV delivers its best black levels with a dynamic contrast system active, it still retains a likeable amount of brightness when showing predominantly dark scenes.


As you’d expect, strong direct LED TVs still deliver more dynamic range thanks to their local dimming. But the 42SL9500’s edge LED pictures sure don’t look flat, even when an image contains a wide mix of bright and dark picture elements. Also, as expected, there seems to be a little more subtle detail in the 42SL9500’s dark shots than you tend to get with direct LED TVs. 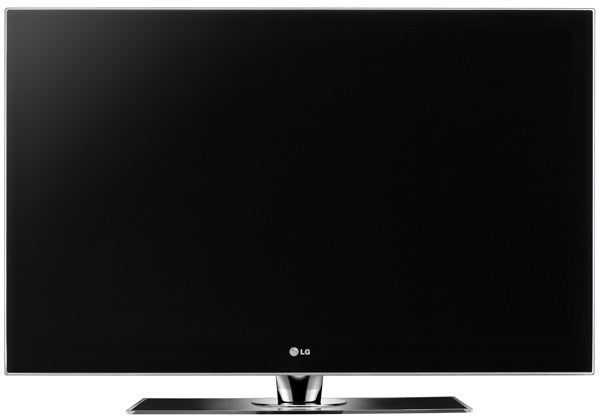 The 42SL9500 does a good job of reproducing the detail and crispness of HD sources too, notwithstanding a little less ‘snap’ than you get with the best Sony, Philips and Samsung TVs around. Plus it looks pretty respectable with standard definition, rescaling such sources to the screen’s full HD pixel count without introducing too much softness or putting too much emphasis on whatever video noise a standard definition source inevitably contains.


You have most likely noticed, though, that the 42SL9500 ultimately only bags an ‘8’ score for picture quality. There are a couple of key reasons for this.


First, while black levels might be good versus normal CCFL LCD TVs, most other LED TVs we’ve seen manage deeper, more natural black levels still. Black levels are damaged, too, by the way the picture loses contrast – and colour saturation – fast when viewed from any sort of angle.


I also found the 42SL9500 to be a little flawed when showing motion. During ”The League of Extraordinary Gentlemen” run-through, I spotted a few 100Hz glitches from time to time, such as flickering and smearing. Yet turning the 100Hz system off then results in a marked rise in motion blur. To be clear about this, neither the processing artefacts nor the blur that occurs without 100Hz engaged are severe enough to be deal breakers. But they certainly play their part in costing the TV that all important extra picture quality mark.


Other issues I have with the 42SL9500’s pictures include a slightly salmony tone to peak white colours, which no amount of calibration efforts completely removes, and a slight lack of finesse when showing skin tones, which can leave people looking slightly waxy.


As usual with a super-slim TV, the 42SL9500’s audio is hardly earth-shatteringly good. But there’s enough dynamic range, power and clarity to make it at least acceptable, and certainly preferable to the really feeble audio efforts of Samsung’s edge LED series.


Considered against LG’s non-LED LCD TVs, the 42SL9500 can be considered a modest success and a fine TV – though it should be said that the brand’s SL8000 slimline CCFL LCD series run it mighty close for similar money while also adding 200Hz to the mix. However, if you’re after a TV that outguns the rest of the LED world, good as the 42SL9500 is, it doesn’t quite make the grade.