LG has an uncanny knack of delivering TVs of outstanding value. And happily the new 42PX5D appears to be a chip off the old block.


For starters, your puny outlay of 1,700 notes gets you one of the plasma world’s more striking-looking TVs, complete with high-gloss black screen surround, slenderness-emphasising shape, and splendidly metallic outer silver trim. The set feels impressively robust and well made, too, avoiding the plasticky finish of many similarly priced plasmas.


Connectivity is better than expected for this price point too. There’s only one HDMI input when we’d naturally have preferred two, but good support comes from a component video input for analogue HD feeds; three SCART sockets; a PC interface; memory card slots able to play JPEG photos or MP3 audio files directly from a variety of different card formats; and a slot for adding a conditional access card for terrestrial digital subscription TV services like Top Up TV. 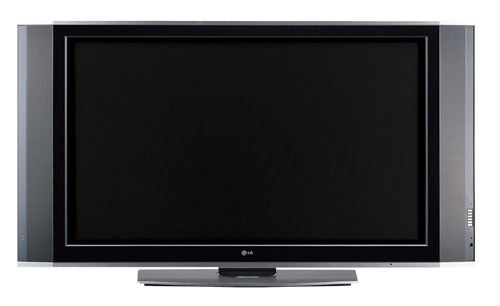 This latter slot naturally reveals the presence of a Freeview digital tuner, and that tuner is backed up by support for the Freeview 7-day electronic programme guide.


The 42PX5D is, of course, fully compliant with the AV industry’s HD Ready requirements, adding to its HD inputs a sufficiently high native resolution of 1,024 x 768 and compatibility with the necessary 720p and 1080i formats.


If, incidentally, you’re puzzled as to why an apparently widescreen TV should boast a non-widescreen 1,024 x 768 native pixel resolution, the answer lies in something called ‘asymmetrical pixel structure’. This sees the TV’s pixels getting stretched along the horizontal axis – a technique that apparently enables the TV to vary the per-pixel balance between the red, green and blue phosphors to produce a colour tone more in keeping with the real world.

The 42PX5D’s connectivity, HD Ready status, digital tuner and memory card options frankly already look good for £1,700, but we’ve still got a few features to uncover yet. Not least XD Engine processing, a proprietary LG picture-boosting system that works on no less than six different aspects of the image. Which are (deep breath): sharpness/clarity; contrast levels; motion while watching movies; colour vibrancy; brightness; and colour tones/blends. Crikey – if XD Engine really manages to put all that lot straight, we could really end up with something special.


More tricks of interest within the LG’s attractive onscreen menus include dedicated adjustments for flesh-, blue- and greentones, a low power mode that saves electricity by reducing the screen’s brightness output, picture in picture tools, and four different systems designed to tackle plasma’s problems with screen burn. Screen burn, lest you’re not familiar with it, can occur with plasma TVs if you leave a particularly colourful image element on screen for too long at a time, resulting in a shadow of that element being permanently left behind. 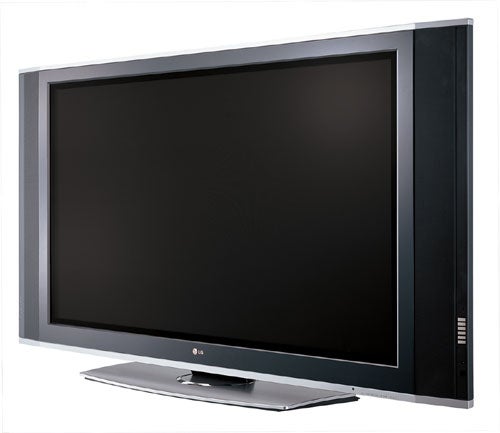 For all the 42PX5D’s budget-busting feature count, though, there is still one little thing missing that would have made our joy complete: there’s no way of setting timer events from the digital EPG, or sorting through it by genre.


The 42PX5D soon puts this tiny blemish to the back of our minds with its winning performance, though. Particularly impactful right from the off is its contrast range, which combines unusually profound black levels with impressively pure bright whites. These whites are well controlled too, so that they don’t overwhelm other parts of the picture as can happen on rival budget plasmas.


LG quotes a strikingly high 5000:1 contrast ratio for the 42PX5D, and its black-level performance suggests that this figure might not be so fanciful as you might imagine.

What’s more, the 42PX5D’s black levels don’t seem forced, in that they avoid the common ‘black hole’ look by displaying far more detail subtlety in dark areas than we’re used to for this money.

This LG’s colours are also in the premier league. Saturations during aggressively bright, colourful sequences are so rich, in fact, that at times they border on extreme – but in a good way! It’s amazing how effective such strong colours can be in keeping your gaze well and truly fixed on the 42PX5D’s screen.


What’s more, the LG does a better job than any other budget plasma we can think of when it comes to making subtler colours, like people’s skin, look as rich and dynamic in their own way as fully saturated onscreen graphics.


Our beloved Xbox 360 and Sky HD receiver, meanwhile, reveal the LG capable of eking out plenty of HD fine detail, which it additionally presents with precious little video noise. Couple this HD clarity with the black levels and vibrant colours we’ve already covered, and you’ve got HD pictures that are almost outrageously good for a £1700 42in gogglebox. 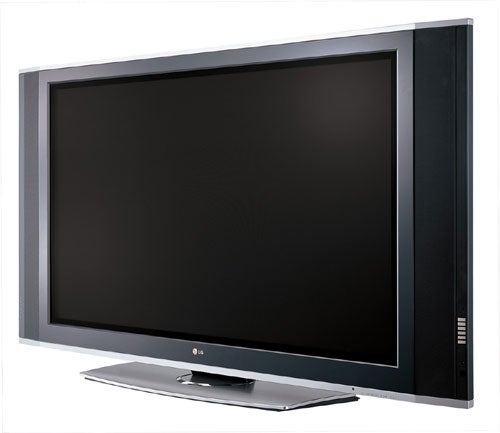 So how come our final picture mark for the set only reads an 8? Well, at times those ultra-rich colours can go a touch too far, taking some tones beyond the realm of believability and, at the same time, highlighting any colour noise that might be inherent to a source.


The 42PX5D is also a bit of a fussy eater in that it doesn’t particularly like a standard definition diet; SD pictures look noticeably more prone to colour and noise problems than HD ones. Finally, if your room is generally quite bright, you’ll probably find the TV’s glossy screen rather reflective, especially while watching dark scenes.


The 42PX5D’s sound offers little reason for complaint. For starters the sound is propelled over a prodigiously wide area, but never loses cohesion. The set’s speakers splurge out healthy quantities of bass too – but not so much that it overwhelms dialogue, even during full-tilt action scenes.


In an ideal world trebles would sound a little less hard on the ear, and the speakers would need a bit less volume before they really open up. But these are really but minor gripes.


While the 42PX5D doesn’t challenge the plasma world’s top dogs for picture quality, it has got more than enough in its favour to make its £1700 price tag look like a steal.