Last week we looked at LG’s 42LV450U and found it struggling to justify its existence – chiefly because we’d already had a quick ‘preview’ look at LG’s step up model, the 42LV550T, and found that set’s only slightly more expensive talents looking like a much more tantalising option.

Now it’s time to put some meat on the bones of this hint at the 42LV550T’s potential with a full review. And while it’s far from perfect, it certainly does more than enough to justify the confidence we placed in it during the review of the 42LV450U.

In looks terms it’s classic LG. Its bezel is slender, its rear slim, and its finish glossy and minimalist. Its edges narrow down to an attractive point too, creating an optical illusion that the set is even slimmer than it really is. It’s not a particularly unique design any more, perhaps, but it feels decently well made and it’s a damn sight better looking than your average sub-£600 42in TV. 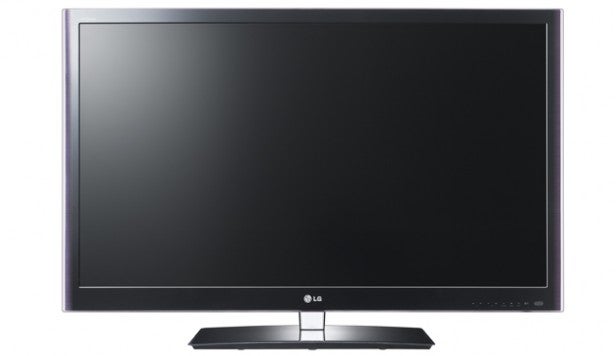 It becomes a whole lot more attractive as you start to count up its connections, too. Four HDMIs is the same number you might expect to find on a really high end set, and it’s stocked to bursting point with multimedia ports. The most important of these is its LAN jack, for this provides access to LG’s Smart TV platform.

We’ve seen in recent LG reviews just how much of an advance Smart TV is over previous LG online TV services, featuring more online video content (including the BBC iPlayer, AceTrax, YouTube, and WoomiTV) and a huge quantity of new apps – all presented via an elegant ‘smart hub’ interface and an even better looking apps ‘store’, complete with themed shelves!

It has to be said that personally we find most of the apps currently available to be pretty stupid or just plain weird. But hopefully they might ultimately turn out to be a mere ‘dry run’ for much more useful things that could be developed in the future.

The LAN port isn’t just for accessing Smart TV; it can also pipe in multimedia files – across an impressively varied range of formats – from connected PC or Mac computers. What’s particularly interesting about this is the fact that the set uses the PLEX ‘bridging’ software platform to produce a streamlined interface between your computer and the TV.

We’ve had trouble getting this to work with Macs when testing earlier LG PLEX-ready samples, but the 42LV550T picked up our resident iMac immediately, without us having to lift a finger. Now that’s more like it.

We’re not done with the LAN socket yet, as it happens, for it has a third use: as mandatory support for a built-in Freeview HD tuner. This tuner alone would be enough to justify the mere few quid the 42LV550T now costs over and above the 42LV450U, even before you’ve started to factor in the extra online features we’ve just covered.

There’s more multimedia functionality we still haven’t mentioned too, courtesy of two USB ports able to play back the same wide selection of music, photo and video file formats deliverable via the LAN port. These include, in case you’re wondering, DivX HD, MKV and Xvid.

Extensive though the 42LV550T’s multimedia facilities are, to some extent they’re only the tip of the set’s feature iceberg. For instance, its full HD screen is illuminated by edge LED lighting complete with local dimming, where sections of the lights around the screen’s edges can be operated independently, to produce slightly more locally accurate luminance levels.

The set also joins almost all of LG’s range in being endorsed by the Imaging Science Foundation, earning its professional calibration stripes for such features as a fulsome colour management system, gamma controls, and both 2pt and 10pt options for adjusting the set’s white balance.

If you’re feeling adventurous you might want to tinker around with the set’s processing-led features, too. These include edge enhancement, black boosters, sharpness boosters, colour boosters, noise reducers – there’s something for just about every aspect of the picture, in fact. Personally, though, we didn’t feel inclined to use any of them, with the possible – and we stress possible – exception of the TruMotion facility.

Designed to reduce judder and blur when the set’s handling movement, TruMotion’s presets all seem rather aggressive. But LG has taken a leaf out of Samsung’s book by introducing a Manual setting via which you can choose for yourself how potently the individual parts of TruMotion focussed on judder and blur work. And with some footage, most notably sport, setting the blur reduction to two or three and the judder to 1 or 2 just about yielded positive results without causing the image to suffer unpleasant amounts of unwanted side effects.

While we’re on the subject of motion processing, we should probably quickly mention the odd ‘MCI 500Hz’ spec listed against the 42LV550T on LG’s website. This does not by any means reflect a genuine 500Hz refresh rate in the 42LV550T. Rather it’s a suitably marketable high number created by combining a native 100Hz refresh rate with a scanning backlight and the set’s interpolation processing. Again we’re reminded of Samsung, with its similarly calculated Clear Motion Rate (CMR) figures.

A TV with as much going on as the 42LV550T could prove tricky to use. But for the most part its combination of attractive Smart Hub menus and a comfortable, logical remote control keeps things pretty simple. There’s even a Picture Wizard tool that guides you through a basic calibration process if you’re feeling too scared just to dive into all the adjustments yourself.

If you’re after a normal living room TV that might be called on to do occasional Blu-ray duties, the 42LV550T turns out to be a very likable option thanks to bright, sharp, colourful images that do a particularly good job with HD material. It truly is rare to find so much detail, so many vibrantly saturated yet believable colours, so much brightness and what initially appears like so much genuine contrast on a 42in TV costing under £600.

Its standard definition upscaling isn’t quite as good at taking out noise as some of the best rival engines, but it’s good enough – especially as colour resolutions don’t tend to take the hit when shifting from HD to standard def that they have with some previous LG TVs.

With some acceptably clean and reasonably dynamic sound to keep the eye-catching visuals company, there really isn’t much at all to dislike about the 42LV550T for its money if you’re after a straightforward family TV.

Where the set does run into a spot of bother, though, is if you dim the lights for a spot of serious movie viewing. Things still look fine if your content is predominantly bright, but if you’re watching something with very dark scenes in it, you’ll find yourself frustratingly unable to achieve a truly satisfying picture.

The problem is not that LG hasn’t provided you with enough tools for getting a good black level response. There are plenty. The problem is that none of them get the job done.

The biggest offender by far is the local dimming system, which leaves ugly ‘blocks’ of brightness around bright objects when they appear against dark backgrounds. 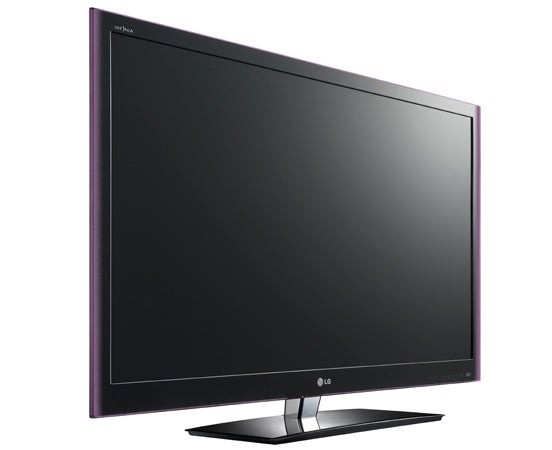 Shame, then, that pictures lose considerable black level depth when you turn the local dimming off, and that trying to put this black level depth back again via the set’s dynamic contrast and backlight controls ends up either making dark parts of the picture look like black holes or else making the screen’s brightness output unstable, with noticeable ‘flickering’ during some scenes.

Viewing in a dark room also brought to light – literally – some subtle pools of backlight inconsistency in pictures. Though unlike the recently reviewed Toshiba 46UL863, these inconsistencies aren’t very aggressive at all.

Ultimately we never managed to arrive at a balance of contrast settings on the 42LV550T that we felt totally comfortable with for serious movie viewing. But then to be fair, given its £569 tag, dedicated cinephiles are arguably not the 42LV550T’s target market.

The final aspect of the 42LV550T’s performance we need to cover off is its potential as a gaming screen. Thankfully, it avoids the massive input lag problems noted on LG’s 3D TVs so far this year, delivering an average input lag figure of 30ms that really shouldn’t be enough to give you an excuse for being rubbish at Call of Duty. Or Battlefield, before you COD haters get started!!

The 42LV550T is another edge-lit LED TV that hasn’t got the black level response chops to totally satisfy our inner movie geek. But that’s not to say it’s not still a good TV for its money, especially once you’ve taken into account its considerable multimedia skills and attractive pictures when watching normal TV fare in typical ambient light levels.