If ever a TV had us at hello, it’s the LG 42LM670T. Combine the astonishingly slim (1cm) frame around its top, left and right sides with the gorgeously glistening metallic silver of its still-trim bottom edge, and you have a TV that, if it were a movie star, would surely be Scarlett Johanssen or – no tech sexism here, folks – Bradley Cooper.

Even better, there are clearly brains behind the beauty. This starts to become apparent from even the most cursory examination of the 42LM670T’s connections, as we uncover four 3D-friendly HDMIs, a trio of seriously flexible USBs, a LAN port, a D-Sub PC port, and built-in Wi-Fi. 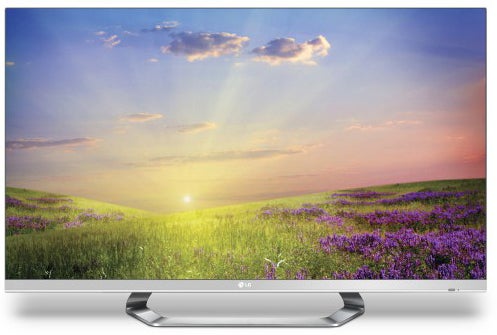 The USBs can play back a pretty prodigious suite of video, music and photo file types, including the popular Divx HD format, while the LAN and Wi-Fi options support both networking to computers and access to LG’s Smart TV online service.

When it comes to networking, LG deserves major kudos for making it not just possible but easy to stream files form Macs as well as PCs. It’s worth adding, too, that the LG 42LM670T thoughtfully supports both PLEX and LG’s own Smart Share/DLNA networking interfaces.

Online goodies
LG has also taken giant steps forward with its online Smart TV platform. The single biggest improvement concerns its reliability, as during our tests it suffered hardly any of the crashes and slow-downs we routinely suffered with 2011’s Smart TV operation.

This stability improvement comes despite LG significantly revamping the look of its Smart TV interface, with much more high-resolution graphics. This doesn’t just make the menus prettier, either; it also allows more content to appear on screen at once without things looking too cluttered, making LG’s Smart Hub home screen even more efficient a way of accessing all your content than it was last year.

In fact, Samsung is really the only brand that can currently compete with LG when it comes to providing a great TV interface for quickly getting to all a modern homes’ potential content sources. 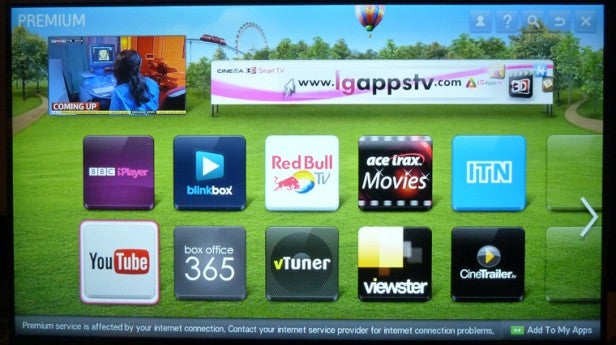 Actually, it’s pretty handy that LG’s menus are so good at handling lots of content, as the number of apps available via the Smart TV platform is now getting towards 200, when you combine the pre-installed stuff with the extra bits and pieces you can download from LG’s app store. This is an impressive effort, even if a good two thirds of the apps on offer are trivial with a capital T.

As ever it’s the video streaming platforms that rule the online roost – stuff like Netflix, LoveFilm, the BBC iPlayer, Acetrax and even – provided you don’t mind a little eccentricity – LG’s surprisingly content-heavy 3D channel. Certainly there’s more than enough going on in video streaming terms to ensure that you should never be short of something to watch, no matter how much rubbish there might be on the TV’s integrated Freeview HD tuner at any given moment.

Despite being an ‘LM670T’ rather than a ‘LM660T’ like the recently reviewed LG 55LM660T, it turns out that the LG 42LM670T only differs from its lower-numbered sibling aesthetically. So despite its remarkably glamorous looks, it’s still not one but two rungs below the very top tier of LG’s new range (which will be crowned by the soon-to-be-reviewed LM960V). This means it doesn’t get the dual-core processors and high-spec motion handling technology sported by the higher models.

However, it still boasts LG’s MCI 400 motion control, as well as edge LED lighting with a degree of local dimming and, of course, LG’s passive 3D technology. LG continues to rub its active 3D rival’s nose in it, moreover, by shipping no less than five pairs of glasses free with the TV. The active 3D Panasonic P50ST50, by comparison, ships with not a single pair of 3D glasses.

Magic remote
One last point to mention about the 42LM670T before unleashing it on a few of our favourite TV and movie sources is the fact that in keeping with recent TVs from Samsung and Panasonic, it ships with two remote controls: one standard one, and a ‘Magic’ one you can point directly at the options you want onscreen. This intuitive approach has been greatly improved from the slightly cumbersome version introduced last year, and the addition of a ‘wheel’ knob for spinning quickly up and down menus has made it a genuinely compelling alternative to the normal remote control experience. 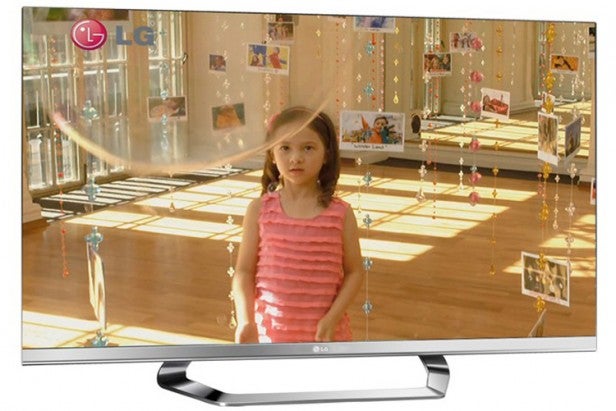 LG doesn’t claim to have substantially tweaked its 3D technology from last year’s iteration. Yet surprisingly, it seems to our eyes to be quite a bit better. Whether it was the lantern sequence in Tangled, the final showdown with Colonel Quaritch in Avatar, the mermaid sequence in Pirates of the Caribbean 3 or the Golden Gate Bridge sequence in Monsters Vs Aliens, the 42LM660T’s 3D images never looked anything less than excellent.

3D delights
Colours are consistently vivid, for starters, and the drop off in brightness between 2D and 3D fare is marginal – certainly miles less than you get with an active 3D set. The lack of any shuttering mechanisms in the 3D glasses means the LG 42LM670T’s 3D images don’t suffer any flickering either, and the image only very occasionally betrays any crosstalk double ghosting noise.

Certainly there are precious few active 3D TVs that can deliver such crosstalk-free 3D experiences – though as ever, we do need to qualify this by saying that passive 3D TVs suddenly go crosstalk crazy if you watch from a vertical angle of more than 13 degrees above or below the screen. 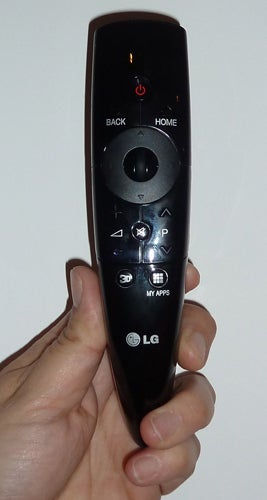 Intriguingly we also felt as if the 42LM670T’s passive 3D images looked more detailed and ‘HD’ than they did on last year’s equivalent LG sets. Since LG doesn’t claim to have adjusted the passive filter across the screen or its glasses in any significant way, we can only presume that this apparent improvement is caused by the superior quality of the panel and processing behind the 3D filter.

If you look really closely you can see traces of horizontal line structure around bright contoured edges, and there’s a slightly less dense look to images than you get with a good active 3D image. But overall we have little doubt that many people will be utterly seduced by the LG 42LM760T’s 3D experience.

With 3D only likely to occupy a fraction of most TV users’ time, though, it’s handy to discover that the LG 42LM760T is also a first rate 2D performer. For instance, it’s easier to appreciate in 2D mode just how sharp and detailed its HD pictures look – a quality, moreover, that’s delivered without pictures looking noisy or excessively gritty (which they did a little on last year’s equivalent LG model).

The 42LM670T’s contrast performance impresses greatly too in 2D mode. We’re used to LG TVs delivering plenty of punch and vibrancy at the bright end of the spectrum, but the depth of the TV’s black level response is excellent too. So long as you keep the backlight under control, black really does look black.

Reasonably even backlighting
What’s more, although dark scenes aren’t completely devoid of backlight inconsistencies, what inconsistencies there are tend to be so small and – with a sensible backlight setting – so faint that we don’t consider them much of an issue at all.

The colour vibrancy noted with 3D is abundantly obvious in 2D too – only with 2D you get a better appreciation for the LG 42LM670T’s ability to render subtle blends with good levels of finesse. 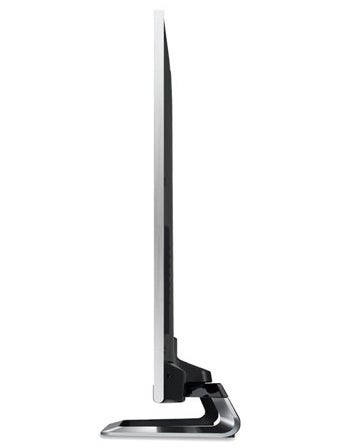 For all its charms, the 42LM670T isn’t a perfect TV. Moving objects lose a little resolution if they pass swiftly across the screen; some shadow detailing goes AWOL during dark scenes once you’ve optimised the backlight and brightness settings to give the best black colour; and you have to avoid the set’s out of the box Vivid preset if you don’t want colours to tip over into cartoonish lunacy.

Audio is a little run of the mill too – a predictable result of the set’s dazzlingly slender body, we guess.

Input lag ahoy
One final irritation finds the TV running with a measured input lag of around 100ms. This is way higher than the figures posted by most rival brands, and could prove high enough to damage your performance if you’re into playing time-sensitive games like Call of Duty or Guitar Hero.

If you’re not a heavy gamer, though, none of the other niggles we mentioned are worth getting disheartened about. For the simple fact of the matter is that the LG 42LM670T’s good points far outweigh its bad ones, making it a truly outstanding mid-range effort.

Verdict
LG has arguably been the ‘most improved’ TV brand for the past couple of years. So it’s not actually a great surprise to find that, on the evidence of first the 55LM660T and now the 42LM670T, 2012 appears to be the year where LG has well and truly caught up with the best of the TV Joneses.