And it’s even less of a surprise to find the LG brand name slapped on the front of the first non-Panasonic Freesat TV to hit our test benches, the 42LF7700. For LG is generally pretty fleet of foot when it comes to serving up the latest features.


What ”is” a surprise, however, is the 42LF7700’s price. While we’ve yet to find a website in the UK selling the TV, we’re hearing that it will be available for around £1,100. This really does look decent value when you consider that Panasonic’s 42in Freesat TV, the TH-42PZ81, still generally costs you £1,200 or more, despite being around for a good many months now. 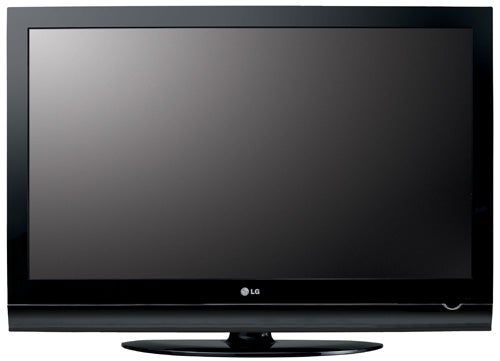 Aesthetically the 42LF7700 is rather more conservative than I’d expected given LG’s traditional design flare. The bezel is simply a very sheer and angular glossy rectangle, there’s no sign of LG’s regularly used red-illuminated extended bottom edge, and the colour is almost completely black, with no trace of fancy stuff like the bright red rear panel found on the brand’s Scarlet range of TVs. There’s some curious semi-translucent effect going on along a slightly angled-back section at the very bottom of the TV, but even this is the definition of subtle.


Not that such subtlety is necessarily a bad thing, of course. For there’s a decent chance that anyone wanting a Freesat decoder built into a TV isn’t a big fan of AV clutter, and so will welcome a TV that keeps itself to itself.


The most instantly striking thing about the 42LF7700’s connections, meanwhile, is the female satellite connection familiar to anyone who’s ever had Sky in their lives. There’s only one of these jacks, revealing that the 42LF7700 doesn’t feature any of the built-in HDD recording talents found on LG’s Freeview+ TVs. But while this would have been extremely desirable, it’s hardly fair to expect such functionality on LG’s debut Freesat TV – especially when it’s so affordable.


Elsewhere on the connections roster are three HDMIs (satisfactory when you consider that the built-in Freesat tuner replaces one of the potential external HDMI sources a ‘normal’ TV would have to cater for), a USB jack for JPEG and MP3 playback, a D-Sub PC port, and an Ethernet jack. Before you start dreaming of streaming stuff into the 42LF7700 from your PC, though, you should note that this Ethernet jack is only there for as yet unspecified reasons as part of the Freesat spec. Our belief, though, is that it will allow the TV to use the BBC iPlayer once all the necessary technical checks and legal bits and bobs have finally been ironed out.

The Freesat tuner is far from the 42LF7700’s only claim to fame. It’s also got LG’s TruMotion 100Hz processing for making motion look more fluid and sharp, LG’s new, improved Intelligent Sensor which adjusts the picture in response to your room conditions, 24p Real Cinema processing for Blu-ray playback, and the latest version of LG’s XD Engine video processing. This, as with similar systems from other brands, works on a variety of picture elements, including colour, contrast and especially clarity and detailing.


The screen’s resolution is, thankfully, a Full HD 1,920 x 1,080, as befits the fact that it’s got a Freesat HD tuner. And another impressive specification is the screen’s claimed contrast ratio of 80,000:1 – one of the highest figures we’ve seen from a non-LED LCD TV.


When you’ve got as many channels to deal with as you get on the Freesat service, the electronic programme guide a TV provides is essential. But I have to say I wasn’t particularly blown away by the one employed by the 42LF7700. The layout isn’t particularly intuitive, and nor is the use of the remote’s coloured ‘shortcut’ buttons. What’s more, moving around the lists of programmes feels rather sluggish, making quickly trying to find a particular channel or programme a bit of a teeth-grinder. 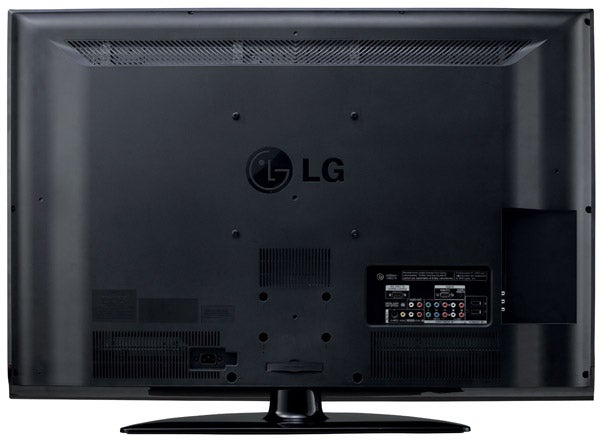 At least the Genre feature can thankfully drastically reduce your searching time. So much so that I wonder if it wouldn’t be a good idea to have the Genre list appear first when you press the Guide button, as happens with Sky’s EPG, rather than just being presented with a scarily unmanageable full list of channels. Just a thought.


First impressions of the 42LF7700’s picture performance are very pleasing. A combination of exceptional brightness – even by LCD’s traditionally full-on standards – and terrifically vivid, fully saturated colours grabs your attention in a vice-like grip, ensuring that the TV takes over your room despite its subtle design.


I was also very satisfied with the quality of the Freesat images generally. Particularly striking is how well the TV suppresses the MPEG artefacting and mosquito edge noise found in many standard def broadcasts. Even a broadcast of ”Ricki Lake” on ITV 2 actually looked decently polished and fuzz-free, and there can be few sterner tests of a TV’s picture standard def make up than that. Aside, perhaps, from a standard def ITV football broadcast…


With the Beeb’s high definition broadcasts, meanwhile, the image looks impressively sharp without, crucially, exaggerating the dotty noise that can afflict some BBC HD fare. In fact, when you combine the sharpness of HD Freesat sources with the TV’s colour richness and brightness, you can end up with a picture that can look stunningly three-dimensional and involving, especially when fed something like the sort of HD mountain view BBC HD loves to showcase during its off-schedule ‘Preview’ footage.


Both Freesat and Freeview images seem extremely stable too, with no stutter or drop-outs during my testing period with the TV.

Turning my attention to motion (an area of difficulty for some of LG’s lower-rent TVs), the 42LF7700 also does rather well. The TruMotion 100Hz system does a really credible job of reducing response time blur, and is especially effective when joining forces with the 24P Real Cinema mode for viewing Blu-rays, making them look fluid, but not unnaturally so. What’s more, provided you make sure you never set the TruMotion routine any higher than its ‘Low’ setting, you’ll also be able to enjoy the extra fluidity without having to suffer too many processing artefacts. Only the occasional face moving quickly across the screen tends to catch the system out, resulting in momentary lag and flicker.


From my initial viewing of the 42LF7700’s Freesat pictures, I also formed the opinion that the TV’s black levels were good. Certainly the sheer amount of punch to the image suggests an expansive dynamic range between the TV’s brightest whites and deepest blacks.

Yet switching to the demands of a dark movie scene, such as the early scene in ”There Will Be Blood” where Daniel is injured at the bottom of a gold mine, I was a touch disappointed to see signs of tell-tale milkiness over the supposedly black background.


You can improve matters in this respect if you drastically reduce the TV’s backlight setting; in fact, the TV’s own ‘Cinema’ preset knocks the backlight all the way down to 20%. But this clearly takes away quite a bit of the vibrancy that so first attracted me to the TV, and creates a different problem in the form of a shortage of shadow detailing in the darkest corners.


To put what I’m saying here in perspective, the 42LF7700’s black levels certainly aren’t bad. It’s just that the issues I’ve described stand in stark contrast to the exceptional black response of Panasonic’s Freesat plasma TVs. Though to be fair, it should be said that the Panny plasmas can’t compete with the LG’s extreme colour saturations and brightness – a potential issue if your TV viewing generally takes place in a particularly bright room.

Another smaller problem with the 42LF7700 is that while standard def pictures, especially from Freesat, tend to look impressively free of noise, this is only the case if you set the TV’s noise reduction routine to ‘Low’. Yet doing this results in the image looking a touch softer than I’d ideally like. Still, if I had to choose between a touch of softness and loads of MPEG scuzz, I’d choose softness every time.


Sonically the 42LF7700 employs LG’s favourite trick: an Invisible Speaker system that effectively uses the TV’s bezel to deliver a wider, less ‘point-sourced’ soundstage than the average TV. And indeed, the benefits of this approach are impressively evident when watching anything with a powerful, well-constructed audio mix, as the TV’s soundstage spreads way beyond the confines of the TV’s screen without losing cohesion. 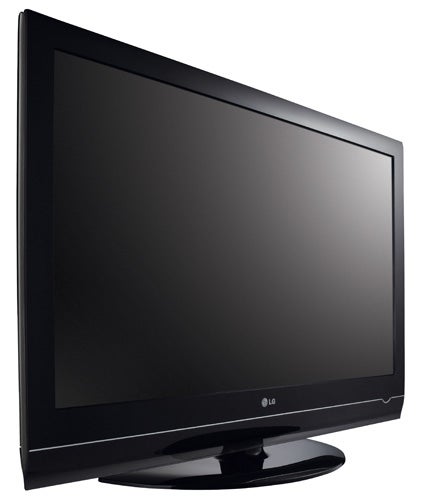 Treble effects are pleasingly obvious in the mix, too, without sounding harsh or forced; the mid-range presents vocals clearly and is open enough to expand at least a little to meet the demands of an action scene; and there’s even a respectable amount of bass – though not enough to lift the sound performance higher than an 8 out of 10.


The 42LF7700 has integrated its Freesat tuner well for the most part, and can produce some quite phenomenal pictures with the right kind of bright, colourful source material. If money’s not too big an issue for you, I personally – movie lover that I am – would probably still be inclined to go for the Panasonic 42PZ81 over the new LG, on account of the Panasonic’s superior black level response. But that doesn’t alter the fact that the 42LF7700 is still a very nice Freesat TV debut from LG that offers something rather sought after in today’s financial climate: impressive value for money.