With fellow Korean outfit Samsung setting the TV bar right now when it comes to balancing keen pricing with high performance levels, LG could really do with stepping up its game to keep the local rivalry strong. Especially as the continuation of such a competitive situation can only spell good news for us bargain-hunting AV punters. So let’s keep everything crossed for LG’s latest big-screen LCD TV, the 42in 42LF66.


First impressions suggest that our hopes are going to be lived up to. The set’s design, for instance, is a class act, partly because of the sheer glossiness of the bezel’s finish, and partly because of the unusual slenderness of the chassis. We wouldn’t perhaps describe it as ‘razor’ thin like LG does in its marketing blurb, but it’s certainly noticeably less chunky than most 42in TV rivals, making it an ideal prospect for wall hanging. 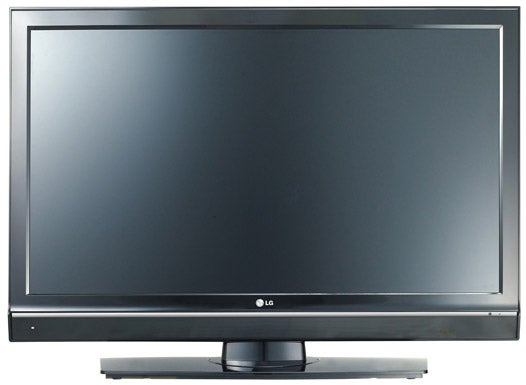 Happily its skinniness hasn’t prevented the 42LF66 from cramming in our favourite pixel count of 1,920 x 1,080, making it a Full HD set perfectly matched – in theory at least – to the 1080i HD pictures delivered by practically all of the UK’s HD sources, including the Sky HD receiver and the vast majority of HD DVD and Blu-ray players.


Even better, LG has gone the extra mile to ensure that the journey from source to screen is relatively uncompromised, by a) providing a mode that removes all overscanning so 1080-line sources can be mapped pixel for pixel to its screen and b) making its HDMI sockets able to take the 1080p format most HD movies are encoded to disc in, and which can now be output by one or two HD players.


Many of the 42LF66’s other specifications read well. Its connections, for instance, include a healthy two HDMIs, a D-Sub PC port, a digital audio output for passing HDMI-received digital audio tracks to an AV receiver, and all the paraphernalia associated with a built-in digital tuner. What’s more, the HDMI socket is equipped with ‘Simplink’, which allows you to control other LG gear connected to it via the TV’s remote. Simplink does not appear to be as ‘other brand-friendly’ as some rival systems, but we’d still rather have it than not.

The 42LF66’s quoted contrast ratio, meanwhile, is an unusually high 5000:1, achieved as usual with LCD technology by a dynamic contrast system, where the TV’s backlight dims automatically when the TV is showing dark scenes.


Additionally the onscreen menus include MPEG noise reduction circuitry for reducing the blockiness that can afflict digital broadcasts, and a black level booster. 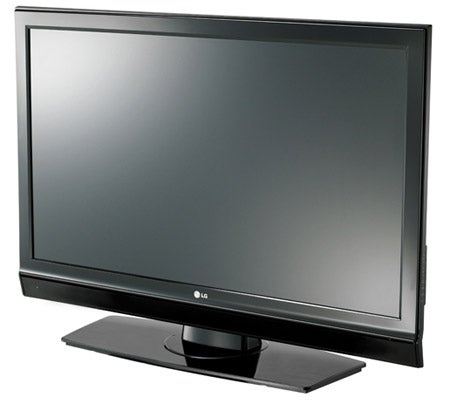 Unfortunately, though, this latter feature doesn’t seem to work as successfully as we’d like. It really doesn’t take very long in the presence of a dark movie scene or two, such as the exploration of the crashed ship in Alien, to note that the LG doesn’t have a particularly good black level response. Parts of the picture that should be more or less black instead look rather grey and washed out. In Alien’s case this results in a reduction of the film’s tension, since it’s just too tiring to keep looking out for signs of the alien lurking in dark corners.


To be fair we’re not saying here that the LG’s black levels are shockingly bad or anything; they’re not, in fact. But at the same time they’re certainly a good few paces behind those of the latest LCD TVs from Samsung, Panasonic, Philips and Sony.


The 42LF66 does at least try to hide its black level shortcomings, though, behind a spectacular ‘veil’ of exceptionally bright and fully saturated colours. Colour-rich games like Viva Pinata on the Xbox 360 practically explode off the screen, while daylight scenes in most HD movies we tried on the TV look consistently radiant.

It’s also noticeable during HD movie viewing just how little noise the picture contains. Those rich colours are largely free from dot crawl, edges look crisp, and even that regular nemesis of LCD technology, motion blur, is rather better suppressed than we would have expected on such an affordable TV. The lack of this latter noise problem in particular also helps the 42LF66’s HD pictures look winningly crisp and detailed.


However, the black level issue we mentioned earlier is sadly not the only problem with the 42LF66’s HD pictures, for during dark scenes colours quite often slip slightly off key too. Skin tones start to look unnecessarily over-pink, and greens and reds both look slightly artificial. 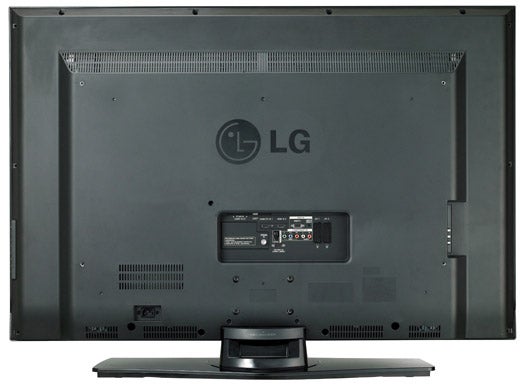 Shifting down to standard definition sources throws up more trouble. Particularly unfortunate is the TV’s tendency to exaggerate any noise that might be contained in a source image – the price you have to pay, we guess, for the picture’s extreme aggression. But it’s arguably a price that’s a bit too steep for our liking. The TV tends to overcook edges during standard definition viewing too, leaving them looking harsh and somehow separate from the image as a whole.


There are one or two standard definition plus points, mind, including a rather sharper look to SD footage than is common on full HD sets, and a continuation of the impressive suppression of motion smearing we noted earlier. But unfortunately you tend to only notice these strengths after you’ve noticed the problems.

Moving on to the 42LF66’s audio, there’s nothing significant to complain about. The speakers look quite small, but LG has managed to magic up plenty of volume and dynamic range from somewhere.


After spending quality time with the 42LF66, it’s hard to escape the feeling that LG is rather dropping behind its Korean neighbour Samsung when it comes to delivering great LCD picture quality. Black levels in particular need to improve if LG wants to keep up with the best.


We guess that by LCD standards the LG’s £914 asking price is very reasonable for a 42in screen. But let’s not forget that at 42in the 42LF66 also treads on plasma TV turf, and when considered against similarly priced 42in plasmas such as Samsung’s 42Q97HD or Panasonic’s 42PX70, even with its full HD pixel count the 42LF66 again doesn’t quite stack up.