LG really set tongues wagging in 2008 when it launched – at London Fashion week, no less – its Scarlet TVs. With red inflections on the fascia and vibrant red, high gloss rear panels, it’s fair to say that the Scarlet sets weren’t exactly subtle. And as such, they seemed to rather polarize the aesthetic sensibilities of the buying public.


It doesn’t come as too much of a shock, therefore, to find the ‘sequel’ to the Scarlet sets looking considerably more discreet. The 37LH7000’s rouge touches are restricted to a circle of red around the circular power button when the TV is in standby, and a gentle infusion of the scarlet stuff within a translucent, gently arced strip running along the TV’s bottom edge.


Otherwise the fascia is boldly, resolutely black. Albeit an extremely high-gloss black given extra drama by the unusual and stylish expanse of smooth black that stretches down below the screen. The biggest change, though, is saved for the 37LH7000’s rear. For the glossy red finish of the Scarlet TVs’ bottoms is here replaced by a much less controversial gloss black, to match the TV’s bezel. 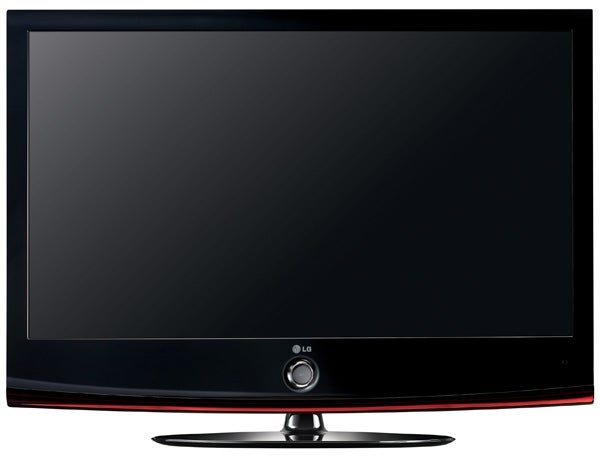 The 37LH7000’s rear end isn’t wholly without interest, though. For starters, it’s unusually slim; just a touch over 50mm (though not as slim, oddly, as the 39mm depth of the 42in 42LH7000). And it’s likeably well stocked with connections too, including four HDMIs, a USB port, and a PC jack.


The USB is especially noteworthy, because as well as the JPEG and MP3 files we might have expected it to support, it also plays back DivX HD file formats. Anyone into filming HD video or downloading compressed HD files will really love this feature – especially as DivX HD playback is very smooth and accomplished.


The 37LH7000 also stands out from the crowd by supporting wireless Bluetooth connectivity, for downloading music and photos from Bluetooth-enabled mobile phones, or listening to the TV’s audio via a Bluetooth set of headphones. The only slight disappointment about the 37LH7000’s connections, given that it’s one of LG’s most premium models, is that there’s no Ethernet port with which you might enjoy either some online functionality, or file streaming from a PC.


Other specs of the TV are promising. It’s a Full HD model, as we’d expect of a 37in set sitting high up LG’s current range. Plus it’s got TruMotion 100Hz processing, for doubling the PAL frame rate and adding completely new frames of image data designed to smooth out motion; and a high claimed dynamic contrast ratio of 100,000:1.

Now that green issues are so high on the buying public’s agenda, it’s nice to find a bright green Energy Saving button stuck at the top left side of the 37LH7000’s remote control. Pressing this immediately calls up the option to set the TV into Minimum, Medium, Maximum, or Auto ‘eco’ modes, all of which reduce the TV’s backlight output (and thus the picture’s brightness) to a greater or lesser extent. The Auto setting adjusts the backlight output in response to the amount of light the TV detects in your viewing room. The Energy Saving menu even carries an option to turn the screen off completely if you can manage with audio alone.


If you’re more concerned with getting a perfect picture than you are with saving the planet, the 37LH7000 has an impressive suite of picture adjustments to help you out. In fact, the TV even provides a genuinely useful ‘Picture Wizard’, which comprises a series of test signals and advice on how to adjust various aspects of the picture until things are much improved. 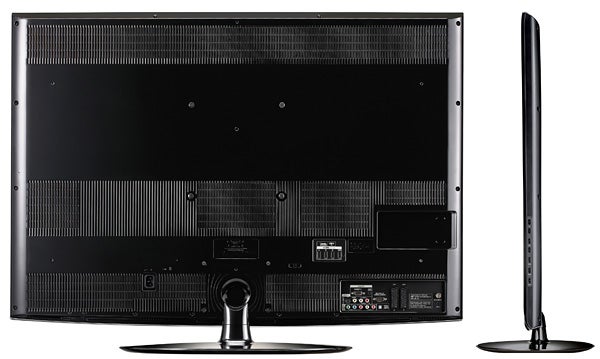 
Perhaps most impressive of all, you can tweak the set’s white balance using contrast and brightness adjustments for the red, green and blue colour elements, while a separate Colour Management System allows you to tinker with the colour and tint settings for the red, green, blue, yellow, cyan and magenta image elements.


Thanks to this truly exceptional degree of image flexibility, the 37LH7000 has been approved by the Imaging Science Foundation as a TV that can be professionally calibrated by one of its trained experts. To support this, the TV’s picture preset menu includes two ISF Expert modes for a professional calibrator to use.

So far, it’s fair to say that the 37LH7000 has delivered considerably more features and design elegance than your typical sub-£700 37in LCD TV. And I’m pleased to report that this ‘great value’ theme continues with its picture performance.


For instance, it’s immediately noticeable, even after some merely low-level image calibration (the TV’s own Picture Wizard should be enough), that the 37LH7000’s TruMotion 100Hz engine is on impressively effective form. Objects glide across the screen with great fluidity, and don’t look soft or blurred as they go. The TV’s motion engine even coped with the considerable challenge of an HD Premiership football match, portraying numbers on shirts and the looks of desolation on the Arsenal players’ faces with absolute precision – no matter how much they charged around like headless chickens – during their mauling at the hands of Chelsea over the weekend. 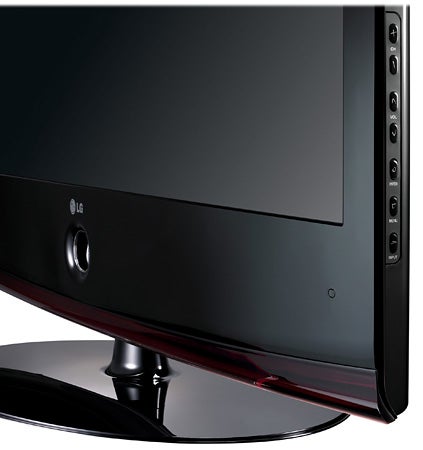 Similarly impressive clarity is retained during action scenes in movies too, whether the motion involves an object within the frame, or a horizontal camera pan. What’s more, the 100Hz engine does its thing – even with 24p Blu-rays – while generating only the occasional side effect (more on these later), provided you don’t set the feature any higher than its ‘Low’ level within the Advanced Control onscreen menus.


I’ve read one or two reviews elsewhere of LH7000 TVs suggesting that their pictures with HD and standard def alike are a bit soft. But to me that seems a rather one-dimensional view. For while I guess there are other Full HD LCD TVs out there that do a more aggressive job of ‘bringing out’ classic HD stalwarts like pore detail and ripples on the surface of the sea, for me the relative clarity the 37LH7000 retains with motion more than compensates for a marginal loss of crispness with static images. After all, unless you’re going through a slideshow of digital photos, there’s a pretty good chance that what you’re watching will have at least a bit of motion in it, right?!

More good news with the 37LH7000 concerns both its colour and black level response. With colours, in particular, the set is quite outstanding, combining extremely vibrant saturations with tones that are subtle in blend and authentic enough to suggest that the TV enjoys an unusually wide colour palette.


As for black levels, they seem just that bit more deep and authentic on this screen than on other recent LG models I’ve seen. All I would say is that you do have to calibrate the TV’s settings quite carefully to fully appreciate this – or, if you’re too impatient for that, you can also get a pretty convincing black level effect simply by choosing the Cinema preset, which reduces the backlight output to 30%.


While we’re on the subject of the backlight, it’s a relief to report that the 37LH7000’s backlight level seems totally uniform across the screen, with none of the distracting unevenness seen with a few recent LCD TVs.


Another important element in the 37LH7000’s black level success is its ability to reproduce a decent amount of shadow detail in an image’s darkest corners, a fact that enables the TV to reproduce dark scenes with a good sense of depth. 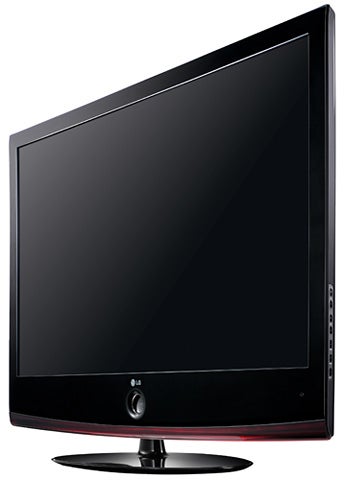 While the 37LH7000’s black levels are very good, though, I’m duty bound to report that they’re not entirely perfect. For as with all LG LCDs, during very dark scenes a slightly bluish cloud can hang over proceedings. But this only becomes distractingly obvious on very rare occasions.


As for the TruMotion 100Hz glitches I mentioned, if you use the mid or high level settings of the system you can see some pretty major shimmering around large moving objects, and some occasionally quite overt flickering when the processing has to keep up with something moving really quickly. But so long as you keep the TruMotion 100Hz system set to low, the worst side effect you’ll probably see is a momentarily staccato look to some very rapid horizontal movements. No big deal in the context of the greater benefits the system brings.


The 37LH7000’s audio isn’t as scintillating as its video. For while the set can deliver a wide soundstage and some exceptional clarity when it comes to treble effects, the treble emphasis is rather too obvious, leaving loud scenes sometimes sounding harsh and sibilant. At least part of this is also down to the TV not producing enough low bass to counterpoint its trebles. On the upside, vocals are always clear, and despite the shortage of bass, the mid-range has enough breathing room to open up at least a little when a film shifts gear from a quiet chat to a full-blown explosion-fuelled action scene.


The LG 37LH7000 isn’t quite perfect enough in the picture or audio departments for us to award it a full-blown TrustedReviews Recommended award. But it’s definitely a winner when it comes to that most important of factors in these cash-strapped times, value.