The 37LE5900 is one of the most startling TV propositions we’ve come across for quite some time. Why? Because it manages to combine 37 inches of edge LED picture technology with a price of under £600. In other words, LG appears to be out to rewrite the TV pricing rulebook once again. And in doing so, it could just see 37LE5900’s selling like hot cakes. Provided the set is actually any good, of course.


It looks nice, anyway. Or at least, it looks like something worth more than £589, chiefly thanks to the extreme glossiness of its bezel, the infusion of a subtle tinge of red into the bezel’s extremities, and the fact that the set’s edge LED lighting enables it to be extremely slim: just 39.9mm off its stand.


It has to be said that the 37LE5900 lacks some of the glamour of LG’s Infinia design, which start with the LE7900 models – mostly because the 37LE5900 doesn’t enjoy Infinia’s sheer, one-layer fascia design. But if the 37LE5900 can hold its own in performance terms against the LE7900s, we’re pretty sure plenty of readers will be more than happy to accept a little design compromise in return for the 37LE5900’s strikingly low price. 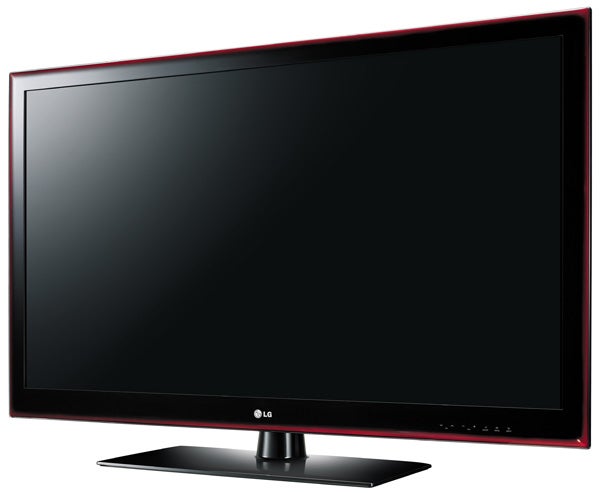 Especially since the 37LE5900’s feature count seems surprisingly uncompromised for such an affordable TV. You only have to check out its connections to start to appreciate this. For as well as an extremely respectable four HDMIs, you get a bounty of multimedia support in the form of a D-Sub PC port, two USB ports, and an Ethernet port.


The USBs go much further than the simple JPEG support you might expect for the 37LE5900’s money, too. For they can also play MP3 audio and even DivX video – including HD files. Excellent.


The USBs can be used, too, to make the TV Wi-Fi via an optional USB dongle, which is why it’s particularly handy that LG has provided two USB ports.


The Ethernet port had to be included on the 37LE5900 because the set has a built-in Freeview HD tuner. But LG has again gone beyond the call of sub-£600 duty and made the Ethernet also able to access files stored on a DLNA PC, as well as providing an interface with LG’s NetCast online platform. Excellent.


Or at least it would be excellent if the NetCast service had more content on it. For after dutifully checking on our 37LE5900 review sample to see if LG has added any new services since last time we saw the service working, we’re sad to say nothing has changed. You still only get YouTube, Picasa and AccuWeather.com portals, leaving the service looking streets behind what Samsung, Sony, Philips and Panasonic are doing right now. Here’s hoping LG can grips with adding more service providers sooner rather than later.

Another interesting connection – though one we weren’t able to test – is the socket labelled Wireless Control. This is designed to take an optional (around £230) LG AN-WL100E external wireless media kit allowing cable-free transmission of sound and full 1080p video from external sources into the TV.


One ‘connection’ the 37LE5900 lacks versus its higher-end siblings is Bluetooth functionality, whereby you could stream photos or video into the TV off mobile phones, or listen to the TV’s audio on Bluetooth headphones. But this is a feature we suspect only a handful of people would really make significant use of; certainly we didn’t miss it much, and we’re supposed to be relatively technically minded versus the general population!


The 37LE5900 gets back to keeping up with the LE7900 series again, though, by sporting a full HD resolution, LG’s TruMotion 100Hz video processing, and perhaps most impressively of all, endorsement from the Imaging Science Foundation (ISF).


The 37LE5900 hasn’t just ‘scraped’ this ISF support either. Its onscreen menus are in fact absolutely stuffed with picture tweaks and features. These include, most notably, gamma adjustment over two or – superbly – 10 points, a full colour management system, and separate standard and MPEG noise reduction systems. 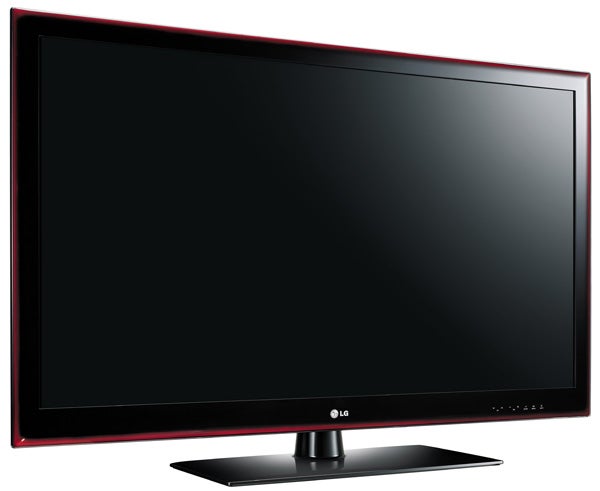 Not all the tools LG puts at your disposal are actually that useful; an Edge Enhancement circuit tends to make pictures look uneven and bitty, for instance, and even the noise reduction routines have to be used with care (or ideally switched off totally with HD sources). Overall, though, LG is to be heartily congratulated for providing so much calibration flexibility at the 37LE5900’s deflated price point.


If you’re the sort of person who either glazes over or feels terrified at the merest mention of in-depth calibration aids, though, don’t worry. For also present within the 37LE5900’s exceptionally well-designed onscreen menus is a Picture Wizard, that walks you through basic picture set up via a selection of test images.


As we settled down to assess what the 37LE5900 is capable of in performance terms, the first thing we noticed was that there was far less evidence of the ‘grey blocks’ around bright picture elements sometimes seen on the LE7900 model we reviewed a while back – blocks caused by that set’s attempt to introduce local dimming to edge LED lighting.


According to an LG contact, the 37LE5900 does still have a degree of local dimming in play, even though there’s no option to deactivate it like you get with the LE7900 series. But we could rarely see its effect – in either a positive or negative way. And actually, given that it was the negatives of the more well-defined dimming system that made the most impact with the 42LE7900, we’re not at all sad not to notice it on the 37LE5900.


The 37LE5900’s pictures are enjoyably punchy too, thanks to rich, dynamic colour saturations and a high level of natural brightness. Colours enjoy mostly decent toning as well – though we found we had to tone down overall saturations and especially the blue element from those employed by the TV’s various preset picture settings before we were happy.


In HD mode the 37LE5900 also delivers decent (though certainly not startling) sharpness and detailing, backed up by some solid-to good motion handling – even with the TV’s TruMotion processing deactivated. Turning TruMotion on reduces judder and marginally improves motion resolution, though we suspect many of our readers will prefer to leave it off, at least when watching Blu-rays.

One really great touch of the TruMotion system, though, is the way LG now apes Samsung in allowing you to adjust the extent to which the motion processing affects judder and blur individually. We’d strongly recommend that you experiment with these settings if you opt to leave the TruMotion system in play with either film or normal TV viewing.


The TV’s motion clarity reduces markedly when you switch to standard definition, though, resulting in pictures than can look consistently softer than we’d like them too – though on the upside, this softness does tend to hide the noise and MPEG mess that can be seen with many standard def Freeview broadcasts.


Colours don’t look quite as rich or natural with standard definition either, though they’re still acceptable.


Unfortunately, however, there’s one thing about the 37LE5900’s picture performance that we actually struggle to find acceptable, and that’s backlight inconsistency. 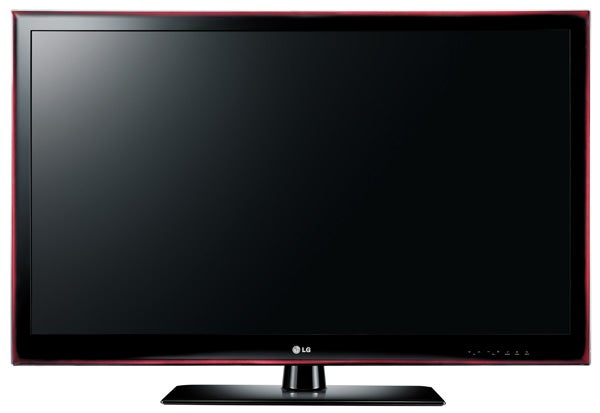 If you watch dark scenes on the TV in low light conditions, you can’t possibly fail to notice patches of extra brightness in the picture. We spotted no less than four separate patches of backlight inconsistency, and these are severe enough to actually reduce the TV’s overall black level response, as well as directly distracting you from what you’re watching.


Thinking about this, it might actually be the pretty average black level response of the 37LE5900 that prevents us from seeing issues with the local dimming system as clearly as we did with the 42LE7900. But apart from this advantage, the grey look to dark picture areas is obviously not a great thing, making dark scenes look milky and short of detail – even before you’ve also taken the distracting lighting unevenness into account.


You can, of course, reduce both the grey clouding and backlight inconsistency problems if you really push down the set’s backlight, brightness and contrast settings. But you have to make the picture almost completely dark before the problem disappears completely.


The 37LE5900’s ultra-thin design immediately raises suspicions that it won’t be anything special in the audio department. But actually it’s marginally better than we might have expected, coping well enough with ordinary ‘daytime TV’ style broadcasts, and at least remaining intelligible during raucous action movie sequences, despite a predictable lack of bass extension.


After a pretty consistent run of likeable and affordable screens from LG, the 37LE5900 comes as a disappointment. It’s great on features and connections, and reasonably pretty for its money. Plus we guess people with a really bright viewing room who don’t watch many films might not be too troubled too badly by the 37LE5900’s fairly major contrast woes. But even if this pretty exacting set of circumstances does describe you, wouldn’t you rather buy a different 37in TV with pictures that didn’t collapse every time you turned the lights off?