With every new generation of flat TV, I find myself convinced that manufacturers just won’t be able to keep offering more for less. As in, more features for less money. But then one – quite often LG – comes along to prove me wrong.


LG has even managed to make the 32LH4000 quite a looker. The main bezel is chic and glamorous in its glossy black surround, while an elegant strip of subtle ‘indigo blue’ along the bottom edge adds a welcome touch of colour to proceedings. 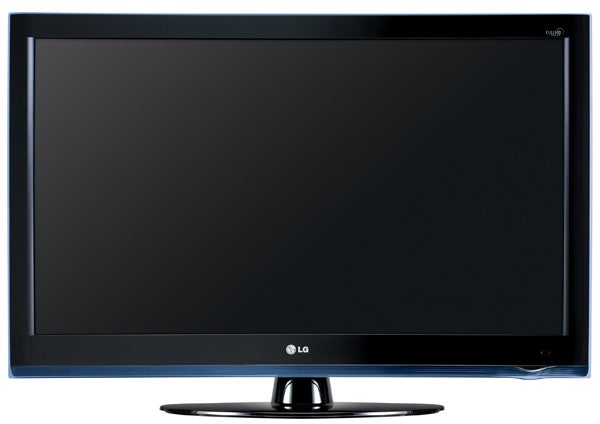 It turns out that the USB slot we mentioned isn’t the only attention-grabbing thing about the 32LH4000’s connections, either. Its provision of three HDMIs is likeable for such a cheap TV too, and unlike some budget rivals, the 32LH4000 offers a D-Sub port for PC connection.


Things get even better as you head into the TV’s onscreen menus. For a start, the menu interface provided for this TV is excellent; easy to read, well structured, and even quite pretty. The remote control’s well laid out too, for the most part, making this one of those rare TVs that even your dear old nan would have little trouble handling. To ram this point home, the 32LH4000 even carries a Picture Wizard feature that guides you through image optimisation using a series of helpful test signals focussed on most of the key TV picture elements.


The other great point about the 32LH4000’s menus is that they’re bursting with features – or at least, there’s much more flexibility on offer than you get with any other sub-£500 32in TV I can think of. Among the most useful of the myriad options are a multi-level dynamic contrast setting, a dynamic colour system, multi-level noise reduction processing, gamma adjustment, a black level booster, and even an Eye Care mode that ramps the image’s brightness down to protect your peepers. 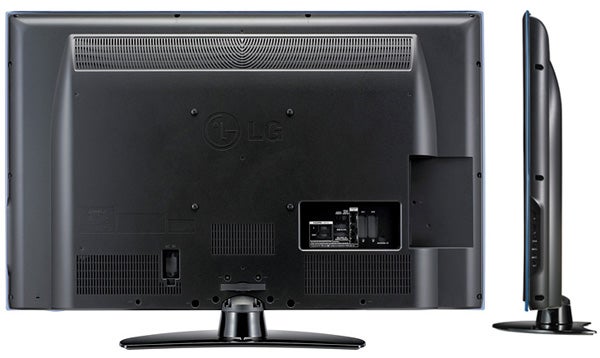 The set also features LG’s Twin XD Engine processing doing its stuff behind the scenes, leaving an Edge Enhancer processor as the only feature we didn’t get much joy out of. As with a similar system found on Samsung TVs, while the 32LH4000’s edge enhancer does make pictures look crisper, it also makes them look harsh and inconsistent, especially if you set it any higher than its Low level.


LG can generally be relied on to play the ‘numbers game’ pretty well, and so as well as the Full HD resolution mentioned earlier, the 32LH4000 boasts a very eye-catching contrast ratio of 80,000:1. Naturally, this figure needs to be taken with a hefty pinch of salt. But it’s impressive enough to at least have me hoping for some of the best black levels yet seen at the 32in level.


With Eco features currently hot property in the TV world, I’ll also add that the 32LH4000 has earned an official Smart Energy Saving Plus recommendation for its energy efficiency, and carries LG’s Intelligent Sensor II, which can adjust the image’s brightness in response to the light level in your room.

In typical LG style, the 32LH4000’s pictures are nothing if not eye-catching.


The main reason for this is that colours are dazzling, thanks to a combination of the image’s extreme brightness (very handy if the set is going to be sat in a sun-drenched room) and super-saturated colour palette. Graphics-based footage, such as the ”Sky News” logos, the opening credits sequence of our trusty ”Casino Royale” reference Blu-ray disc and even any scene from a quality animated picture like the Blu-ray of ”Ratatouille” all look simply radiant.


LCD screens are widely known for their brightness, of course. But the 32LH4000 is still a cut above the norm in this respect, especially when compared with other screens at its deflated price point. 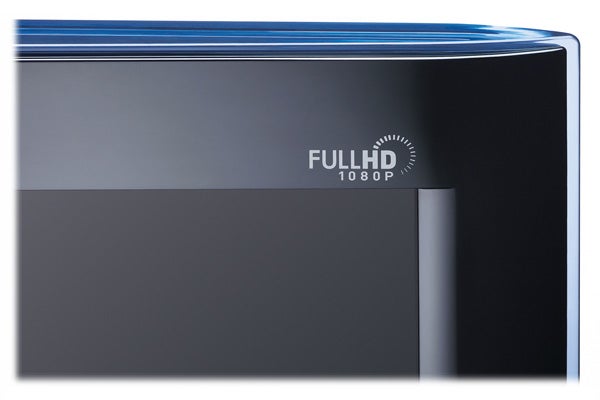 The purity of the 32LH4000’s white peaks is impressive for such an affordable screen, too, while yet further impact is added to the image by the TV’s talent for delivering a great sense of the extra sharpness and detail on offer from HD sources. People who maintain that you can’t really appreciate HD on a screen as small as 32in will only need a couple of minutes with this LG to realise the error of their ways. Particularly if you’ve taken the sensible precautions of a) deactivating all noise reduction systems and b) switching off the set’s overscanning defaults, which in the 32LH4000’s case means choosing ‘Just Scan’ in the TV’s aspect ratio menu.


In an ideal world, LG would have automatically sorted this out for you – especially the noise reduction setting – as soon as the 32LH4000 detected a 1080 input. But making sure the set is presenting HD as purely as possible really isn’t a complicated or time-consuming process. 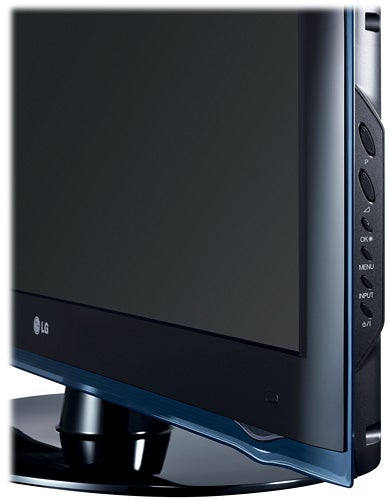 I was also pleased by how little the image’s sharpness is blighted by blurring when there’s a lot of movement in a picture. Some previous TVs at the more affordable end of LG’s range have suffered quite badly with LCD’s nasty tendency to lose resolution over motion, but the32LH4000 really does well, despite not having any 100Hz processing to help things along. Even with something really tricky to handle like the latest ATP 1000 Miami Masters tennis tournament, while the ball certainly does leave a slight trail behind it, the action in general is far from the blur-fest I might have anticipated.


Another key area where it seems that LG has improved things for the 32LH4000 is standard definition. Decent quality Freeview broadcasts are ‘rewritten’ to the screen’s Full HD pixel count much more sharply and cleanly than LG has generally managed before, with less video noise and softness to spoil the show. The scaling processing struggles a little with really low-quality broadcasts, at which point some softness and the occasional colour discrepancy can sneak in. But the same can be said of many other LCD TVs and to some extent it seems harsh to blame the TV for the shortcomings of broadcasters.

Even though the 32LH4000 delivers marked improvements in two of LG’s previous Achilles’ Heel areas, it still struggles somewhat with a third: black level response.


For while black levels are deep and punchy enough to play a part in the picture’s extreme dynamism I talked about earlier, when tested more severely by a dark film or TV scene there’s no ignoring the blue-grey mist that hangs over everything. What’s more, the darkest parts of the picture tend to look a bit hollow thanks to the set’s inability to render shadow details as fulsomely as the best LCDs.

It doesn’t help the 32LH4000’s black level situation, either, that contrast drops off dramatically if you’re forced to watch the picture from any sort of angle whatsoever.


The slight black level issues mean one or two colour tones during dark scenes slide slightly off key too – something that’s all the more noticeable against the impressively natural tones evident during bright scenes.


Sonically, the 32LH4000 is about average. It doesn’t readily distort, even during action scenes, treble details are well-rendered and plentiful, and voices tend to stay clear even under tough conditions. But a simple lack of raw power prevents the soundstage from opening up as it should during action sequences, and a lack of bass makes explosions, gunfire and the like fail to sound fully rounded and convincing. 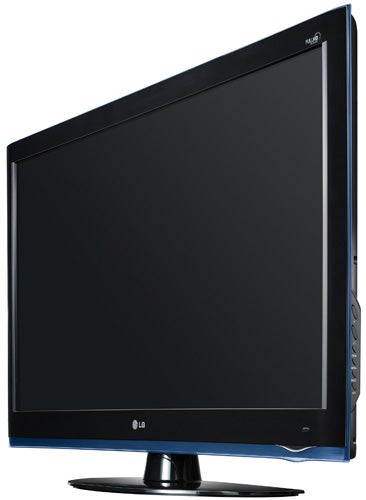 It also appeared that something in the TV’s processing causes enough of a delay to sometimes introduce marginal sync problems between pictures and sound while watching 1080p/24 Blu-ray sources via HDMI. If you have a decent separate audio system or your Blu-ray player carries the facility to adjust the audio output delay, then you should be able to get round this. Otherwise, it could certainly be a concern.


There are times – with bright, colourful and ideally HD fare – when the 32LH4000 produces the sort of pictures you’d feel chuffed to find on a TV costing twice as much. And it’s not a bad standard def performer either. Arguably, these strengths are already enough for a TV costing under £500. But some familiar weaknesses with black level and viewing angles together with a curious audio sync issue can’t help but take the gloss off what is, for much of the time, a quite stellar budget effort.