LG’s 15in 15EL9500 TV thinks it’s so darned special that it doesn’t even ship in a normal TV box. In place of the cheap brown or white cardboard and flip top of your usual container, the 15EL9500 luxuriates in a jet black affair with a slide off lid – the sort of box you might usually find holding an engagement ring or the latest high-tech fashionable smartphone.


But then when you’ve just shelled out the best part of £1,500 for a 15in TV, you probably feel entitled to packaging that’s a bit more pukka than most. Yes, you read that right: the 15EL9500 really does cost four figures. 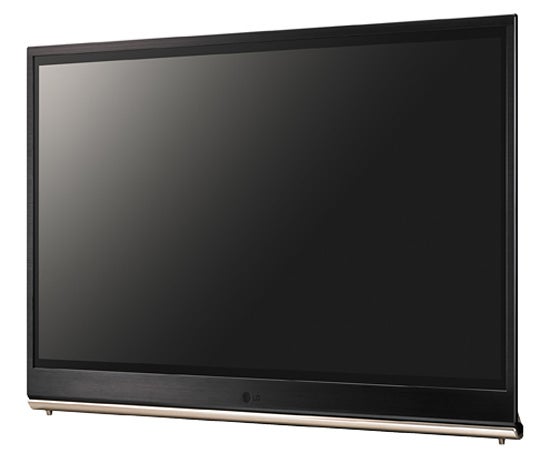 The assumption from this price has to be that the 15EL9500 is no ordinary 15in TV. And actually, that assumption is absolutely spot on. With knobs on.


For the 15EL9500 is not only the first TV to use OLED technology that we’ve ever tested at TrustedReviews, but it’s also the largest OLED TV currently available commercially. In other words, despite its petite size, it’s a groundbreaker twice over.


Not that it’s actually the very first OLED TV to be launched in the UK. That honour belongs to Sony’s even smaller 11in model, the XEL-1. A snip at £2,500. But Sony doesn’t seem keen to let us review one of these TVs for some reason!


OLED technology is a big deal for two reasons. First, it allows screens to be almost unbelievably slim. And second, the quality it’s delivered whenever we’ve seen it demoed is absolutely stunning.


The 15EL9500 certainly ticks the ‘unbelievably slim’ box. For the majority of its 15in screen features a back end that sticks out just 3.2mm. Let us say that again: 3.2mm. Truly extraordinary. 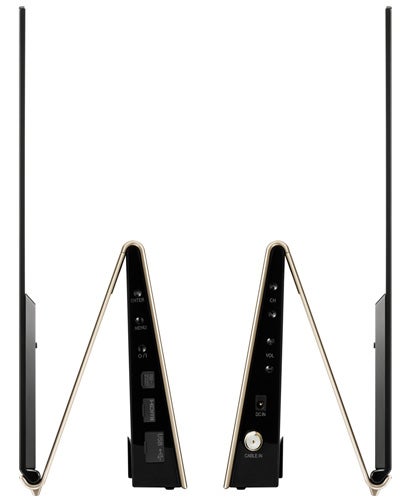 There is a section towards the bottom of the screen that extends the depth to around a centimetre, but this doesn’t actually matter that much since it’s cunningly disguised within the curves of the rather swanky, brushed aluminium prop-up stand that screws to the screen’s underside.


The remarkably slim bezel is nearly as black as the strikingly dark screen it sits around, and it’s backed by a hugely pleasant brushed metal backplate – a plate that gives the thin screen rigidity and robustness, as well as giving the TV a suitably opulent, gleaming feel. In fact, the design is apparently waterproof, to the extent that it’s been approved in the EU for bathroom installation.


The stand allows you to adjust the tilt angle of the screen by a few degrees to suit your tastes or viewing position, or it can be used to hang the TV on a wall.


Please note, though, that the stand/mount can’t be completely removed to leave the screen in all it’s breathtakingly slim glory. Why? Because the folds of the concertina stand also house all of the screen’s connections, including its power inlet.


Space is at a premium where connections are concerned, as you might well expect, so you get just a single mini HDMI (a rather short large HDMI adaptor cable is supplied), a USB port, a little service port, and last but not least a tiny antenna input that takes in your aerial feeds via another supplied adaptor.

It’s a pity on a TV this bleeding edge that its built-in tuner isn’t an HD one, only receiving Freeview’s standard definition channels. But then we guess we should be grateful that any tuner at all has been squeezed into such a phenomenally svelte chassis.


The USB port proves capable of handling JPEG, MP3 and even DivX HD file types, which is pretty much as good as we could have expected, and makes up for some of the disappointment created by the lack of any Ethernet/Wi-Fi/online/DLNA talents on the set.


If you’re not exactly sure what the big deal is about OLED technology, the core facts that matter are that it employs organic light emitting diodes that generate their own light. It’s this so-called self-emissive quality of each pixel that’s got people so excited about OLED’s picture quality, since it can boost contrast (as there’s no brightness control limitation imposed by having single or multiple external backlights) and response time. 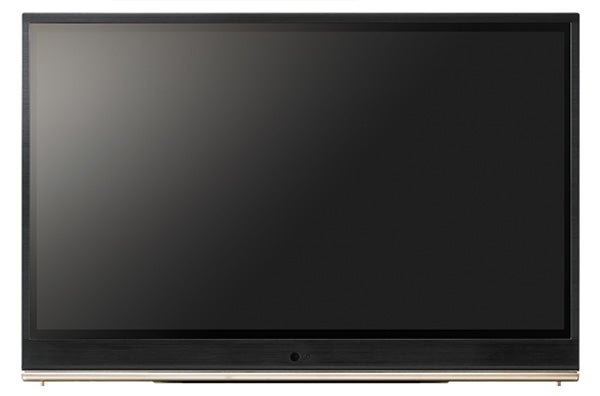 The screen’s contrast is thus rated at a staggering 10,000,000:1 – a figure which even dwarfs the figures claimed by Panasonic’s latest plasma TVs. What’s more, unlike with almost all normal LCD TVs, the 15EL9500’s contrast shouldn’t reduce dramatically if the screen is watched from a wide angle.


The 15EL9500’s response time, meanwhile, is reckoned to be under 0.1ms. If true, this should lead to us seeing little or even none of the motion blur that’s still generally so problematic with LCD TVs.


Yet another key benefit of OLED technology is its running efficiency. The 15EL9500 runs with around 40W of general power consumption – which is considerably less than half of what a typical LCD TV might be expected to consume.


Finally, the self-emissive nature of OLED screens generally means they look much brighter than normal LCD TVs – around 1.5 times brighter, to be precise!


With 100Hz on board to tackle judder, the only obvious shortcoming on the 15EL9500’s otherwise jaw-droppingly promising spec sheet is its native resolution. For it only manages 1,366 x 768 pixels rather than a Full HD pixel count. But we wouldn’t expect this to bother us one iota on a screen as small as this. 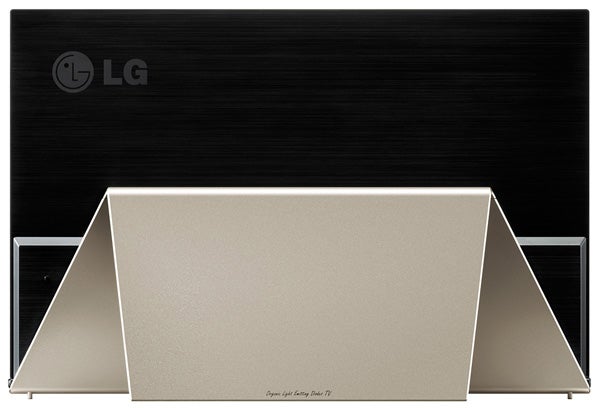 Setting the 15EL9500 up immediately reveals some good news: the presence of LG’s excellent current onscreen menu system. This shows that LG has fully ‘domesticised’ the screen.


In fact, the TV is almost ridiculously flexible to set up for such a tiny TV. Highlights include the facility to adjust the screen’s brightness, its horizontal and vertical sharpness, its gamma level, the sharpness of its edge enhancement, a dynamic contrast system and even a colour management system.


If you’re too scared to tackle some of these features unaided, though, then don’t worry – the 15EL9500 carries LG’s likeable Picture Wizard setup aid. Plus the set has been endorsed by the Imaging Science Foundation (ISF), so that you could call in one of their experts to calibrate the TV for you.


In action, the 15EL9500 actually outperforms our high expectations, tossing out the window every single frustration and limitation we’ve come to accept as, to some extent, inevitable with LCD TVs – especially small ones.


This is particularly apparent when watching dark scenes. Not least because they actually look like dark scenes! In other words, the set’s black level response is truly sensational, with the blackness of night time scenes looking all but indistinguishable from both the black frame of the screen and the darkness of our blacked-out test room. There’s just no trace worthy of mentioning of the grey clouding associated with normal flat screen technologies.

What’s even more striking is that the pitch blackness on show seems remarkably stable, even with the set’s dynamic contrast feature activated. Though you really don’t need this feature with a picture that exhibits such superb native black level response, so you might as well turn it off.


The fact that the 15EL9500’s black level response is native, meanwhile, also means the set can reproduce shadow detailing and colour subtleties during dark scenes that ordinary LCD TVs can only dream about. Dark parts of pictures thus look just as layered and detailed as bright ones, helping footage look consistent and natural.

Moving around the room while watching the 15EL9500 reveals yet another amazing thing about its contrast performance. Namely that it doesn’t reduce one jot if you watch the TV from even quite extreme angles. Result.


Having black colours as deep and believable as those of the 15EL9500 also delivers plenty of other benefits. The picture looks exceptionally dynamic for such a small screen, for instance, thanks to the self-emissive screen’s ability to position punchy bright material side by side with inky blacks within a single image frame.


Then there’s the set’s colour response. For where most LCD TVs, especially small ones, struggle thanks to their lack of contrast to produce a wide, punchy and natural range of colours, especially during dark scenes, the 15EL9500’s colour palette is easily a match for anything we’ve seen from the best of the large-screen TV market. 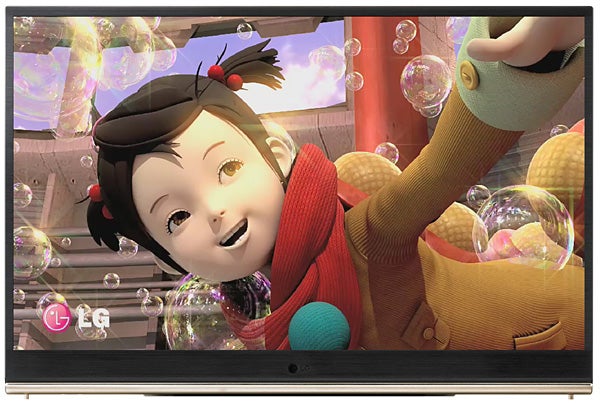 The screen might not be Full HD, but as predicted, this doesn’t deliver discernible problems on such a small screen. HD sources still look crisp and detailed, colour blends look smooth and free of patching or striping, and best of all, the crispness and detailing remains almost entirely unaffected by motion – another respect in which OLED murders standard small-screen LCD technology.


In fact, aside perhaps from the screen being a little reflective of direct light and some slightly iffy pre-calibration colour tones, the only complaint we can muster about the 15EL9500’s revolutionary picture quality is its confinement within just 15 inches! Here’s praying that somebody figures out a way to start making big-screen OLED panels affordable soon.


The situation isn’t nearly so rosy with the 15EL9500’s audio. Getting a really significant sound performance out of so little bodywork is probably a scientific impossibility, so it’s hardly surprising that the sound produced is tinny, pretty much devoid of bass and only able to deliver a functional amount of volume. Though actually, it’s arguably quite miraculous that the 15EL9500 is able to produce any discernible sound at all!


There is one further issue, though: a marginal gap between the audio and the picture, which resulted in slight lip-sync issues with one or two Blu-rays we tried.


Unfortunately, though, although much cheaper than Sony’s OLED debut, the 15EL9500 also reminds us of OLED’s currently high costs.


But if money’s not as important to you as owning the very best of everything, even when you’re only talking about a portable TV, then the 15EL9500 is a wafer-thin treat even Mr Creosote would enjoy. 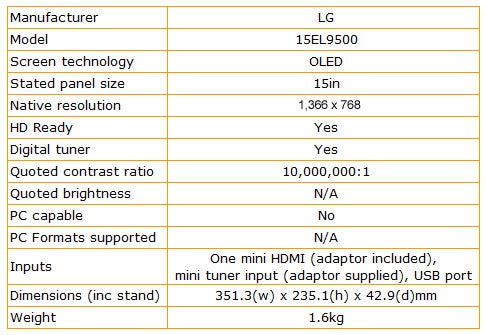