Lexmark has a large range of inkjet printers and a larger range of all-in-ones, but the printers often seem to be the same mechanisms dressed up in different cases. The Z2320 is an entry-level device, based on twin, integrated print head and ink cartridges.


Coloured in white and light grey and with a smartly embossed silver Lexmark logo on its top surface, this printer has just one control, a power button. The paper feed tray at the back folds down over the printer’s top cover and the output tray slides in underneath the machine, so it can have a very small footprint when it’s not actually printing.


At the back are a single USB 2 socket and the plug-in power supply. This is a clever innovation on Lexmark’s part, though it has been around a few years, as it enables different power packs to be slotted in for different regional voltage supplies, giving the manufacturer an easy way to change between PSUs. It also saves on lumbering the customer with a cumbersome, cabled power block knocking around on the desk. 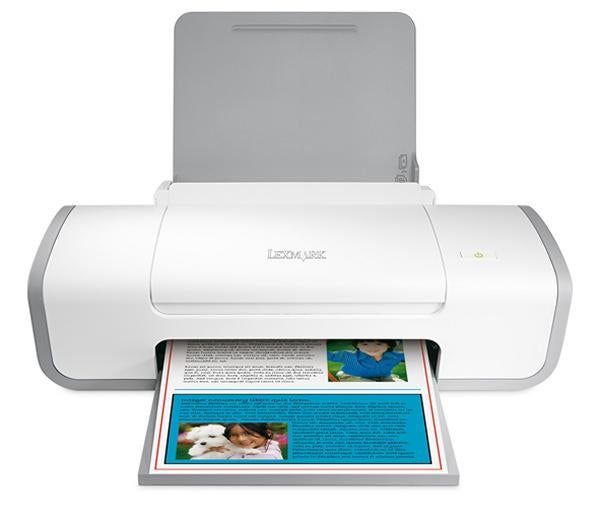 It’s a shame there’s no PictBridge socket for printing digital photos from a camera. While the implementation of memory cards is comparatively costly, a PictBridge connection is little more than the cost of a USB socket.


Lift the cover of the Z2320 and the twin print heads scuttle to the centre of the carriage, so you can clip in the black and tri-colour cartridges. If you want to print photos, you can exchange the black cartridge for a tri-colour photo one, to get six-colour printing.


Once the software’s installed it prints an alignment page, which is easier to read than some, making it in turn a relatively simple process to align the heads. The print driver includes instructions for manual duplexing, the ability to create and use watermarks and simple image enhancement for contrast, fill-in flash and image sharpening.


You probably wouldn’t expect an entry-level printer to print that quickly, but the Z2320 doesn’t do too badly. Our five-page text print took 56 seconds to complete, which is a speed of 5.36ppm against a rated speed of 16ppm, but in absolute terms is not bad for an inexpensive inkjet printer.


The colour test print took three minutes 44 seconds, or 1.34ppm, which isn’t so good, but is no worse than most of its rivals. Two minutes 19 seconds for the 15 x 10cm photo print is again slow, though, so you’re going to need some patience to use this machine regularly.

The quality of output from the Z2320 is fair, given its asking price. There’s some feathering of black ink into the paper fibres, but only enough to give a slight fuzz to the look of text. For day-to-day use, text output is acceptable.


Colour graphics are also reasonable, with good solid colours and accurate registration of black text over the top of them. Some shades are a little pale in comparison with the originals, but are good enough for home and small business use.


Photo output is a bit below standard. Although the images themselves are fair, with a good level of detail and reasonable contrast, the ink takes a while to dry and you can end up with smudged images, if you overlay one page with another in the output tray. 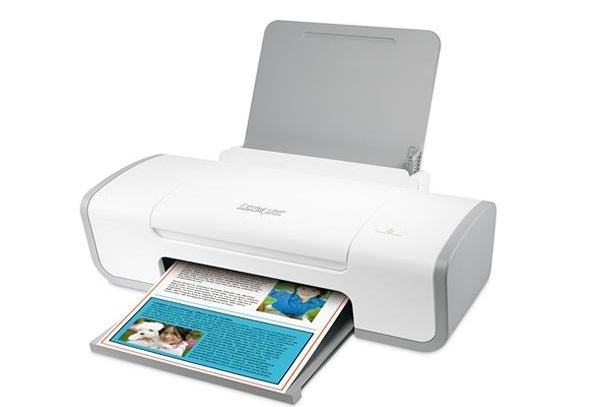 The Z2320 would be a good, entry-level inkjet printer if it wasn’t for the cost of running it. The two prints cartridges, number 14 for black and 15 for colour, are rated at 175 and 150 ISO pages, respectively. Looking up a cheap source of these two consumables gives prices of around £12 for each, which converts to page costs of 7.87p for black print and 16.1p the colour.


These are both really steep, when you compare with something like the Epson Stylus D92, which has equivalent costs of 2.91p for black text pages and 6.93p for colour.


Since these two printers are direct rivals, running costs of over twice as much on the Lexmark doesn’t reflect favourably. Paying nearly 8p for every page of text you print is high enough to curb your printing and may prove counter-productive. If Lexmark is counting on income from consumables to balance the low purchase price of the printer itself.


The Z2320 was never going to be a spectacular printer, but it gets on and does its job reasonably well for a small outlay. If it wasn’t for the high running costs – and really Lexmark ought to look at increasing the page yield or reducing the consumable price to get this cost down – this would be a good, basic device.


Print quality is fair and speeds are not that far out of the norm for an entry-level machine. As it is, though, the money you’ll have to pour in to keep this printer printing is more than you should have to pay.