Lexmark has added wireless connectivity to a lot of its new range of printers and all-in-ones and the Z1520 is at the top of its printer range, with automatic duplexing and photo-printing thrown into the mix. It can be had at a price well below its RRP, too.


Long and low are the best adjectives to apply to the Z1520. In a blocky white and silver case, it has a black panel highlight on top and a smoked, black, fold-up feed tray, which can hold a hundred sheets. A grey, plastic output tray slides out from the front of the printer and a grey bulge at the back houses the built-in duplexer.


On-board controls are minimal, with buttons for two-sided printing, paper feed and power. There’s a USB 2.0 socket alongside the small Wi-Fi aerial at the back, giving two standard connections to the outside world. 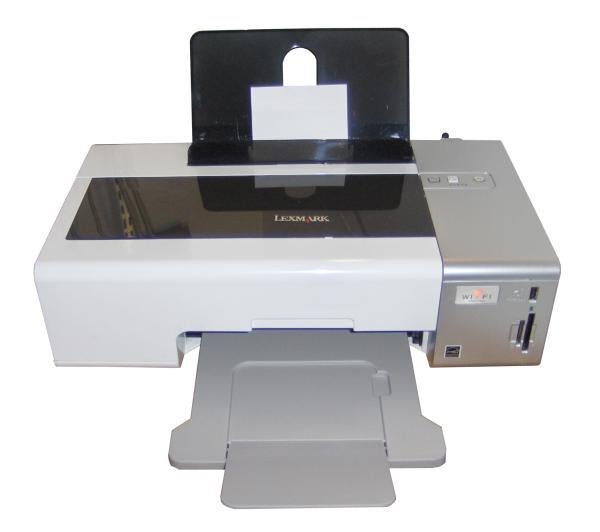 A USB installation of the printer is uncomplicated; just run the setup software and you end with a reasonable set of Lexmark applets, including a driver which supports page imposition and that built-in duplexer.


Installing for wireless, a key reason for buying this model, isn’t a lot more difficult, though you do need to connect the printer temporarily via the supplied USB installation cable, so you’ll have to have it near a PC during installation. You can then move it to a more convenient location, if you want. The setup software detects networks automatically and all you have to do is confirm the one you want the printer attached to.


Lexmark inkjets have never been devastatingly fast and, as always, manufacturers speed figures don’t bear much resemblance to typical, everyday printing. Lexmark quotes 10ppm for black print and 4ppm for colour, while we saw 4.7ppm and 1.8ppm, respectively. Speeds using the Wi-Fi connection were slightly faster than with a USB cable, which is unusual. 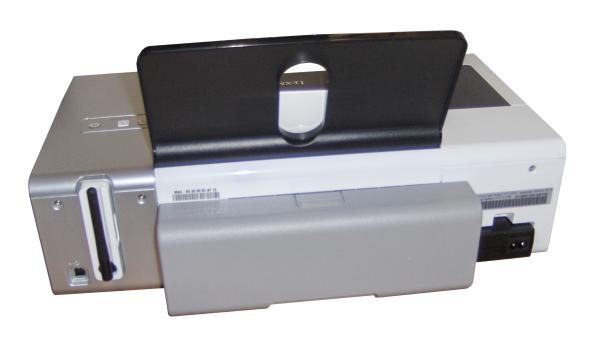 Since the printer is fitted with a duplexer as standard, we also ran our 20-side, duplex document test, which took 4:49 to complete, giving a speed of 4:15ppm. This is around twice as quick as Canon’s PIXMA MP610, mainly because of the much shorter drying time allowed between printing of the first and second sides.

Print quality is very similar to that from Lexmark all-in-ones we reviewed recently. Black text print shows some feathering of the ink into the paper and one or two places where the registration of one print pass to the next is less than ideal.


Colour print is better, with solid colours and good black overprinting. Colour shades are fairly accurate, too, making this a reasonable machine for home office use. The photo prints, while offering smoothly gradated tones and with well picked-out foregrounds, lack much detail in the shadows and are marred by scrub marks from the feed rollers, suggesting undue haste to keep print times down. 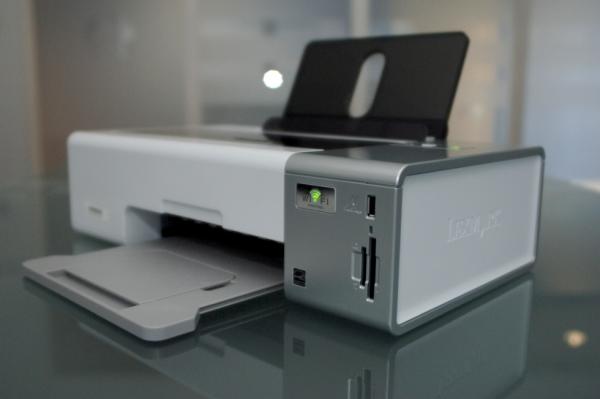 Interestingly, not to say annoyingly, the driver software stopped our print run and demanded colour cartridge replacement, even though the colour output was showing no signs of degradation. It allowed black print to continue until there was obvious ink depletion. This kind of protection is reasonable in a printer with permanent print-heads, but Lexmark’s heads are built into each cartridge on the Z1520, so you’re not going to damage anything critical by printing until the ink has really run out.


Comparing the page counts we saw with Lexmark’s claimed ISO page yields shows their estimates are pretty accurate, so we’ve used the company’s figures. This gives a cost per black text page of 3.73p and a cost for colour of 8.68p. These figures are reasonable and fit roughly in the middle of the field for printers in this price bracket. They rely on the use of the high-yield ink cartridges, though lower-capacity, standard-yield consumables are supplied with the printer


There are a lot of features in the Z1520 which make the spec sheet look good, but once again it’s the core technology which lets the printer down. Black text on multi-purpose paper isn’t as crisp as it should be and photo prints suffer from over-inking. It’s time Lexmark upgraded its ink-jet technology, if it’s going to compete with the likes of Canon and HP.


Against this, the wireless connection works well and increases the flexibility of the printer and the duplexer does rather better than its competitors in printing double-sided pages at reasonable speed. If you’re happy with passable print quality and you’re on a budget, check this machine out. 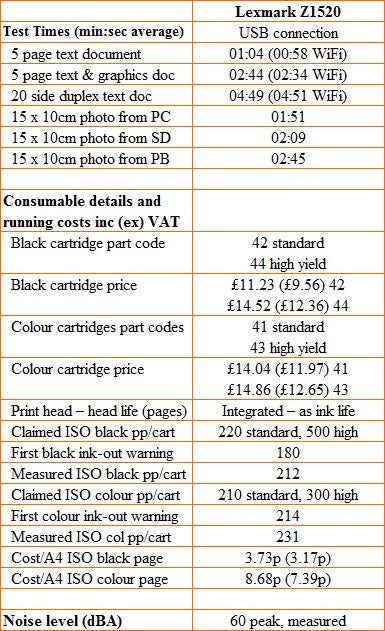