Encouraged by sales of its rock-bottom, entry-level all-in-one, the X2350, Lexmark has now introduced the X2470, a slightly upgraded machine at a substantially upgraded price. Where we could find the X2350 at £40 all in, the X2470 can’t be had for much less than £58. Still inexpensive in the overall sweep of multi-functions, but what do you get for nearly 50 per cent more money?


This is a modest little all-in-one, quite blocky in appearance and close to white in colour. It looks like it has had a chunk taken out of the front and has trays at the rear to feed paper and at the front to receive it. Both pull out telescopically, so the device has a small footprint when it’s not in use. 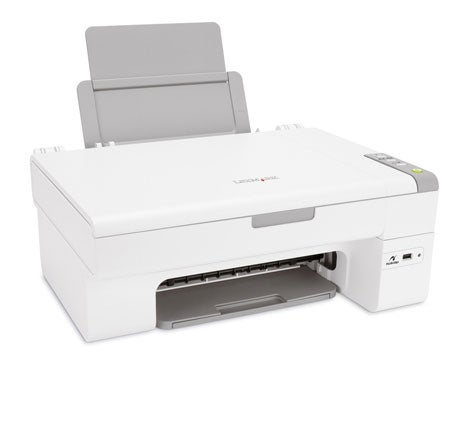 The top lifts up to reveal a Contact Image Sensor (CIS) scanner, which has an extremely compact scanning head, but also a very small depth of field, so may cause problems scanning anything with a 3D profile – such as books with spines.


The most obvious differences from the earlier X2350 machine are the extra button on the small control panel at front right and the socket for a PictBridge USB cable in its front panel.


The extra button controls a new feature, where you can lay a 15 x 10cm (4 x 6in) photo print on the flatbed and produce a copy directly to a glossy photo blank, without the intervention of a PC. The PictBridge socket means you can connect any PictBridge-enabled camera and use the camera’s LCD monitor to select and print images, directly. There are no memory card slots in the machine, but without an LCD display of its own, there would be little use for them. 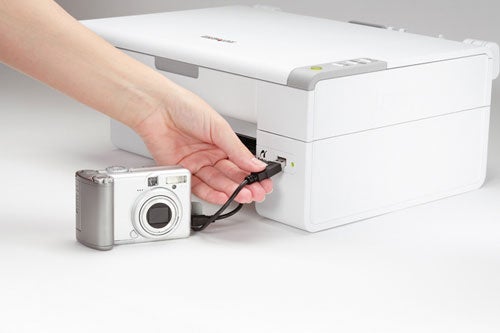 Lexmark provides a good bundle of application software, including Abbyy FineReader 6 OCR and both photo management and photo editing applets, designed by Lexmark. The print driver tries to be as helpful as possible, offering a semi-Wizard interface for quick selection of the settings you may need for common printing tasks.


Although the print engine appears identical to that in the X2350, the firmware that drives it must have changed, as print quality, particularly of black text, has improved considerably. The earlier machine produced grey-ish text which we thought poor, but the X2470 is better. Still not as densely black as a printer with a dedicated black cartridge, it’s now more than passable for everyday correspondence.

Colour print on plain paper is solid and reasonably faithful to the original hues, though slightly paler in tone in the richer colours. A colour photocopy taken from the flatbed scanner loses more of the richness, but again for day-to-day home, or home office, use it won’t be a problem.


Photo output is surprisingly good, up with rival photo printers costing up to £100. Colours are well rendered and images are sharp and with a good level of detail in both light and dark areas of the image. Lexmark’s photo print copy button produces a print which is obviously less vivid than the original, but a fair working copy. It does take nearly four and a half minutes to do it, though.


Print speeds are very similar to those of the X2350, which are not good. It took two minutes 18 seconds to print our five page text document, which equates to just over 2ppm, and the text and graphics test was a smidgeon slower. 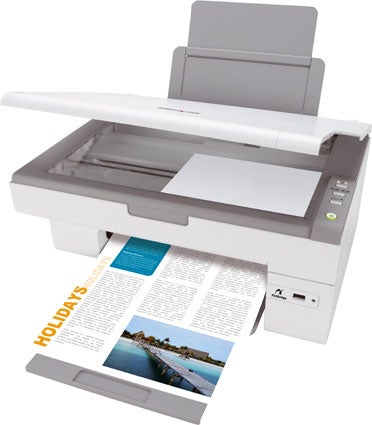 To its credit, Lexmark quotes the machine’s speed as ‘printing in QuickPrint mode and excluding processing time’, but we see no reason to exclude the time it takes to rasterise a page in software, before sending it to the printer. This is a function of the efficiency of the driver, which is the responsibility of the manufacturer, in this case Lexmark. It’s the overall printing time that will matter to you, as you can’t do anything with a printed document until the last page lands on the output tray.


Since there’s only a single cartridge to buy and this prints black or colour, calculating printing costs is simple. We printed 198 black pages and 174 colour pages with the X2470 and the cheapest we could find a cartridge was £11.99, so with paper costs taken into account, a five per cent black page comes out at 6.52p with a 15 per cent colour photo at 25.7p. The black print cost is the highest we’ve seen for a while and is, presumably, one of the reasons Lexmark can keep the retail price of the machine down. You can at least spread the cost, though, as the individual cartridge price is low.


This is a better all-in-one than the X2350; it has improved black print, can print from a PictBridge camera and can photocopy from 15 x 10cm prints to duplicate them. It still takes as long and only costs slightly less to print a page, so it’s up to you whether you consider these extra features worth the higher price. At £58, it’s closer to, though still below, the price of some impressive rivals.