Lexmark’s new range of all-in-ones was launched under a year ago, yet we’re already seeing replacement models coming along. The Pinnacle Pro901 is due to replace the Prestige Pro805, one down from the top of the Professional range, and includes fax in its features set, as well as print, copy and scan. 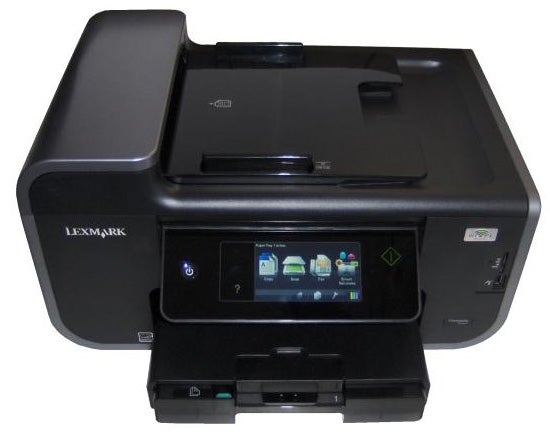 A heavily curved silver and black case gives the machine a very purposeful appearance. A horizontal feed tray for the Automatic Document feeder (ADF) sets it off well and the completely vertical front face is punctuated by a memory card slot for SD, MemoryStick and xD cards, a PictBridge socket and an indicator for the Wi-Fi connection, which comes as standard.


The most obvious feature of the machine, however, is its 4.3in, wide-aspect touchscreen, which takes on all its control functions. The panel is reasonably responsive, though you sometimes have to press quite hard to get a reaction. The bitmapped panel is bordered on either side by single-function touch buttons, for things like job start and cancel. 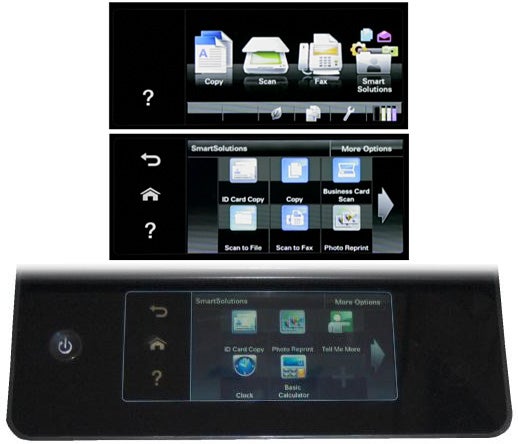 Up to 150 sheets of paper can be loaded into the single tray at the front of the machine, and each page makes a 180-degree turn during printing before ending up on an extended paper support, which increases the overall footprint of the device quite a bit. A second tray can be fitted underneath, doubling the paper capacity and allowing for two types of paper to be loaded at once.


At the back are sockets for USB, Ethernet and phone line and an optional third-party handset. Wireless connection is also provided and a touch keyboard pops up on the display to take a wireless passcode. 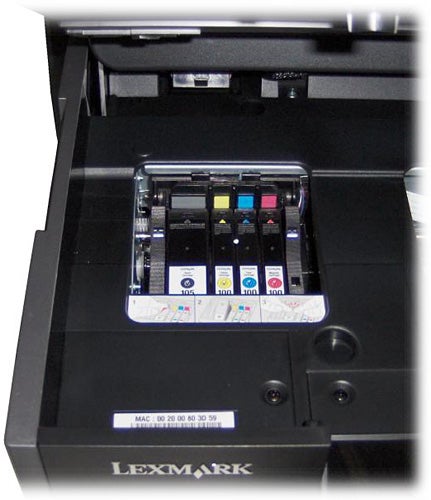 The four dye-based ink cartridges plug into the head carrier very easily, though the retaining clips at the back of the carrier, which click each cartridge into place, could be more positive.


Drivers for Windows and OS X are provided, along with applications for basic document handling and OCR. Linux is also catered for via a downloadable driver.


The SmartSolutions system offers an increasing range of applets, which can be downloaded to the Pinnacle and other Pro range all-in-ones. It’s a convoluted process though, where you have to create an account and select your applets from a computer and then sync with the printer to download them. It would be much easier if the whole thing could be handled from the printer’s touchscreen.

A downside to the intelligence now built into the Pinnacle Pro901 is the time it takes to start up. A typical inkjet all-in-one is ready to go within 10 seconds or so, but the Pinnacle takes over a minute. Not long in the overall scheme of things, but if you prefer not to leave kit in standby, it could get irritating.


Although Lexmark claims normal mode speeds of 16ppm for black print and 10ppm for colour, we didn’t see more than 6.4ppm and 2.9ppm, respectively. These speeds are a long way below the spec, and the colour speed is low in comparison with other machines in this price bracket as well. 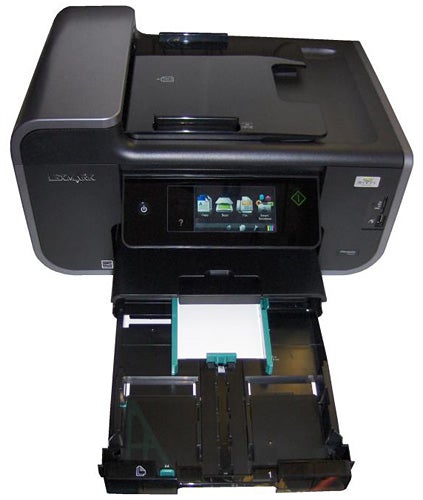 Duplex print, which comes as standard, gives a speed of 3.9 sides per minute, which is slow, but not as slow as some Canon duplex all-in-ones. A single-page colour copy is quite sluggish at 1min 11secs, though a five-page black text copy from the ADF is reasonably speedy at 1min 25secs. 15 x 10cm photos are universally quick at about 50 seconds, from whichever source you print.


The quality of the prints is fair, certainly a lot better than from previous generations of Lexmark machine. There’s a small amount of ink spatter in evidence, but generally print is clean. Colour prints are reasonably bright and black text over prints again shows little sign of running. 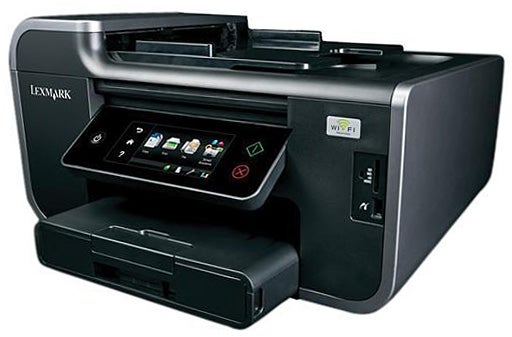 A single-page colour copy produced much fainter colours than in the original, and photos, while showing good colour transitions and natural tones, lose quite a bit of detail in darker areas.


This printer, like others at the top of Lexmark’s Professional range, benefits from the 105XL cartridge, which contains the same amount of ink as the 100XL, but is priced to give a very low black page cost. We measured this at 1.4p per page, which is very low. It also has an effect on colour page cost, which we calculate at 7.1p per page. This is low in comparison with other all-in-ones, too.


The Pinnacle Pro901 is a replacement for the Prestige Pro805 and offers fax as standard and the option of a second paper tray, which the Prestige doesn’t. With an SRP of £299 inc VAT on the new machine, though, Lexmark will have to watch sales against its top-of-the-range Platinum Pro905, which comes with fax and the second tray as standard and now costs around £265. The prices of both 900 series machines seem high, anyway, when compared with rival printers from other manufacturers.