Lexmark’s marketing strategy for its ink-jet printers and all-in-ones has been to sell them cheap, at one point so cheap it was rumoured to cost less to buy a replacement printer than a pair of new ink cartridges. Its latest photo printer, the P915, is still inexpensive to buy, but not quite at that level. For under £75, though, you’re still getting a lot of printer for your money.


The P915 is designed to look like a smaller version of the P6250 all-in-one. It’s decked out in cream and steely blue and the first things you notice are a multi-format memory card reader and a colour LCD display. It’s very unusual to see a 63mm LCD on a printer in this price bracket and Lexmark uses it well to display preview images from camera cards and its own menu options. You can’t change the display angle, though, which is a shame.


The printer uses a conventional paper path, from a near-vertical, 100-sheet hopper at the rear to a telescopic out-tray at the front. When you’re not printing, the feed tray folds flat onto the top of the printer. 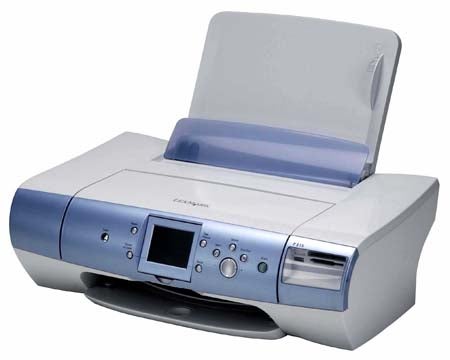 There’s a seven-way memory card reader built in under a hinge-down cover on the right and a series of buttons to left and right of the display which control menu options. At the back, there’s a single USB socket and a plug-in power supply which takes the mains lead.


Installation is reasonably straightforward, though we had trouble getting the driver to recognise a USB 2.0 connection. It worked happily with straight USB 1.0 however and we saw little difference in speed between this and the P6250, which had no problems with the same USB cable and port.


One of the neat features of the display is that it’s used to show how to fit and change the cartridges, using a simple Flash-style movie. It’s a simple matter to plug in the two cartridges, which by default offer tri-colour (cyan, magenta, yellow) and three-colour (light cyan, light magenta, black) photo inks. You can replace the photo cartridge with a black one, if you need to print text pages.


As well as the Lexmark driver, there are photo management and manipulation utilities for tidying up images before printing. They work well and are pitched at about the right level to make the printer useful. For serious photo editing though, you’ll need to invest in more specialist software.


You can use this printer with a PC via a conventional cable, or as a stand-alone photo printer, taking images off a memory card or directly from a camera, via a PictBridge connection.

Print times are reasonable, though not the fastest in class, with our five page text print taking 52 seconds and the single-page, mixed text and graphics print, 35 seconds. Considering Lexmark quotes a maximum black print speed of 22 pages per minute in draft mode, the five and a bit pages per minute we measured in normal mode is less impressive.


Output quality is reasonable, though black print is not that black if you use the photo cartridge, rather than the straight black one. Even with the black cartridge installed, text is a bit ragged, with noticeable splatter around some characters. Lexmark’s liquid ink technology has lagged behind its major competitors for several years now. 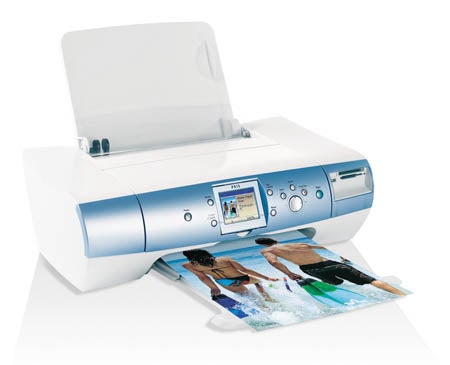 Colour graphics show some banding, but in general reproduction isn’t too bad. When it comes to photographic prints, the main target of the P915, colours are rich, though with a slight red cast. Comparing four and six-colour photo prints, it’s surprising there’s more detail in the four-colour output. This is particularly true in areas of shadow, but as some compensation, the six-colour prints show more energy in the deeper, more vivid colours.


The P915 uses the same standard and high-yield ink cartridges as the P6250, but the cost of a 20 per cent colour page came out slightly lower than from the all-in-one. This is not because of the different print yield, but due to variations in consumable costs. Although the lowest ink cartridge prices we could find are still higher than for the earlier machine, the cost of Lexmark’s glossy photo paper has dropped and more than compensates. So we have a cost of just over three pence for a five per cent black text page and 38p for 20 per cent colour, using a four-colour print model. Neither of these costs is untoward, though with some of the better-known brands, their cheaper photo paper can make a big difference to overall cost.


This is a convenient and well-designed, multifunction printer. It’s display and control buttons make it easy to use as a standalone photo printer, but it’s at home, too, printing text or images from a PC. Print quality isn’t up to the best Canon, Epson or HP can offer, but for many people it will be more than good enough.