Lexmark does a very nice line in all-in-one devices, which can print, copy and scan. More recently, they’ve added in the ability to work with camera memory cards and PictBridge cameras. Now Lexmark has added in its new Evercolor ink technology, you should be getting a good deal, for very little outlay… but do you?


About the size of a personal photocopier, Lexmark’s P6350 has a conventional layout, with up to 100 sheets of paper feeding from a fold-up tray at the rear to a pull-out one at the front. The neatly-fitting top cover lifts to reveal an A4 scanner flat-bed, with a blue LED indicator helpfully showing which corner you should line up your originals to.


The front panel is neatly laid out and is dominated by a 63mm colour LCD, set in the middle. To the left are power switch and mode buttons, while on the right there are assorted control buttons and, right at the end, slots for memory cards and cameras, behind a swing-down cover. The only sockets at the back are for power and the printer’s USB 2.0 PC connection. 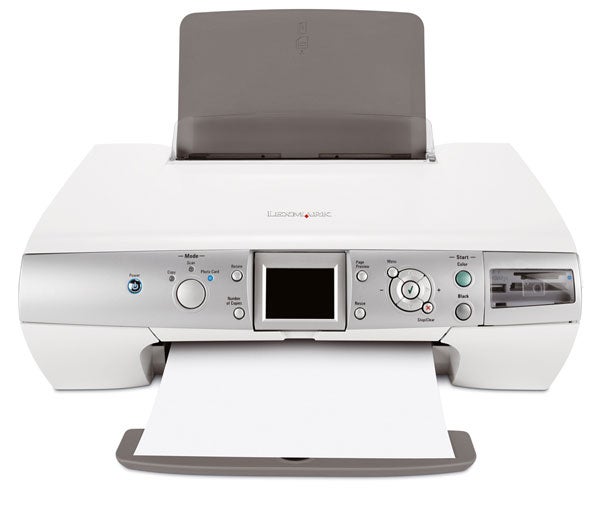 Evercolor is Lexmark’s answer to print fading. By using a mixture of dye and pigment-based inks, it has achieved a fade resistance of up to 65 years, under glass, according to the top testing lab, Wilhelm Research. We’ll have to take their word on that one.


Hinge up the whole of the top section of the device and you can access the twin ink cartridges. There are some nice touches here, like a little inspection light which shines down from the underside of the scanner section, and a receptacle for a spare cartridge.


You can run the P6350 as a six-colour device, with tri-colour and photo cartridges, or swap in a black cartridge in place of the photo one for more cost-effective text printing. Whichever cartridge isn’t in use sits in a holder, which fits in the receptacle. The machine automatically does its own head alignment after each cartridge change, so you don’t have to spend time typing in offset numbers.


The control software covers most of the normal tasks to which this type of machine could be put. There’s the All-in-One Center – which includes OCR – Imaging Studio and a Photo Editor, probably one of the best own-brand suites offered with a budget multi-function machine.


Print speeds on Lexmark’s top-end ink-jet printers and all-in-ones have been creeping up and this machine printed our five page text document in 51 seconds, giving a speed of just over 6ppm. The text and graphics print took 35 seconds, so just under 2ppm there. While these speeds are nowhere near the draft mode figures quoted by the company (all ink-jet makers quote unrealistic print speed figures, mainly to keep up with their competitors), subjectively the P6350 feels quite swift.

Print quality is only OK, as our print samples showed some smudging and irregular character build, particularly in lines of text. Colour graphics came through fairly cleanly, though again there was some spread of ink into the paper. A colour copy of our text and graphics page, produced on the machine, showed considerable colour degradation, compared with the printed original.


Our photo print showed up the differences between four-ink and six-ink colour printing quite dramatically. The six-ink print was more vibrant, with richer, truer hues. Reds and blues were better reproduced and shadowed sections were darker. A slight yellow cast to the four-ink print was also removed. 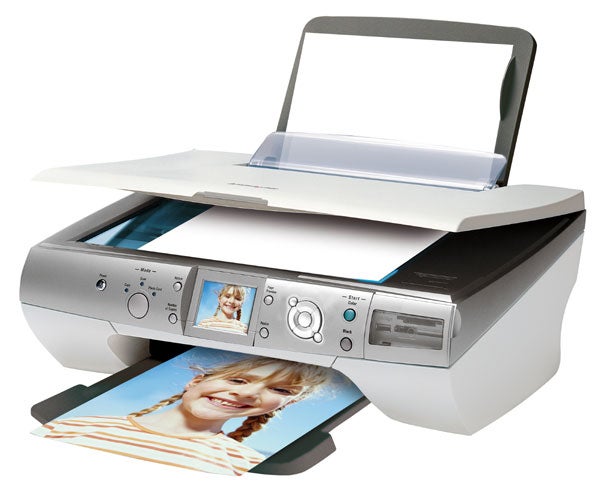 There are standard and high yield versions of both the black and tri-colour ink cartridges and neither of these are particularly expensive, if bought online. Black text works out at around 3.6p per five per cent cover page, which is not bad for an inkjet. A 20 per cent colour page costs 35p, but the majority of this is taken up by a sheet of Lexmark’s A4 paper, which is around the 24p mark.


Low ink warnings are very premature, even allowing for the time needed to go out and buy replacements. In our colour tests, the machine was issuing warnings when there was still nearly a third of the ink left: when it came to black, it was nearer a half. As always, judge for yourself when print quality drops off and only change cartridges then.


Take extra care, too, as it’s something of a balancing act. This Lexmark machine automatically changes to printing black text with the three colours from its colour cartridge, if you don’t replace the black cartridge when it’s truly empty. Black printing with three colours is much more costly.


The P6350 is a well-designed machine at a budget price. It can produce very acceptable colour photos, though plain paper prints are less impressive – it’s also both easy to use and versatile. Print costs are reasonable for the class of machine, as long as you take the first low-ink warnings with a pinch of salt. For anybody with the normal cross-section of home printing tasks, it’s a sound choice.