All the main consumer printer makers have dedicated ‘photo lab’ style printers, which specialise in printing 6 x 4 inch (15 x 10 cm) digital prints. Lexmark’s P450 is the first printer to include a CD-R drive inside it though, for easy archiving of your photo sets.


This is a very neat design, with a slimline, 61mm LCD display which folds up from the top cover of the printer, to reveal six button control panel. None of the buttons has any captioning, but all rely on icons to show their function. Such is the good design of the menuing system, they’re all pretty obvious, offering left and right, select, move up and start. The only slightly less than clear button is the one with the paint palette on it, but this is for image editing.


There’s no way to connect the P450 to a PC; it’s purely a standalone photo lab, but there are still two sockets at the back. The first of these is a phono socket, to connect a video lead to a domestic TV for slideshows, while the second is for USB 2-based memory drives and Bluetooth adapters. Bluetooth is an optional extra, which enables you to print from mobile phones. 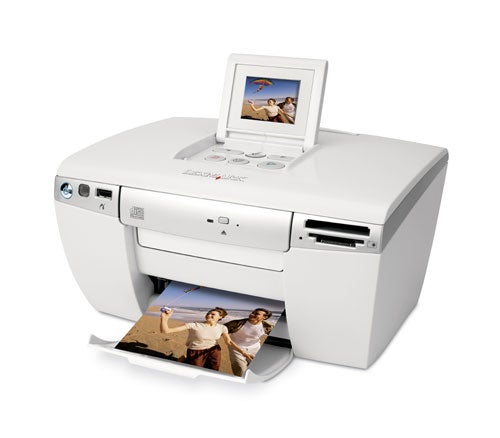 The majority of connections are at the front however, with a PictBridge socket on the left and memory card slots at the right. In between these two is the notebook-style CD-R drive. This can be used for both archiving pictures from camera or memory cards, or to playback to the LCD or a TV screen.


There’s very little to install in the P450, as there’s no PC connection and the only consumable is a single, three-colour ink cartridge, available in standard or high-yield versions. When you raise the printer’s lid, a single carrier sits waiting in the centre of the carriage for you to clip the cartridge into. 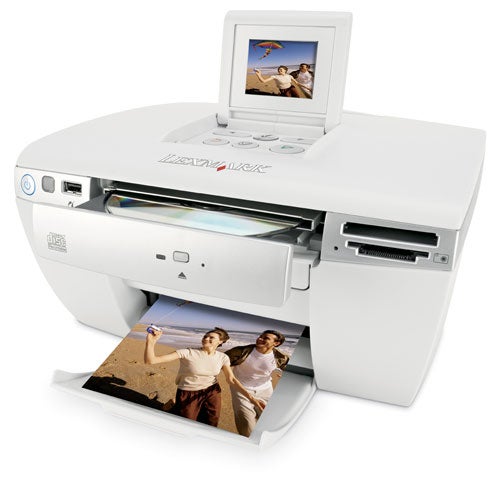 6 x 4-inch (15 x 10cm) photo blanks are loaded in a near-vertical tray at the back and feed through to a pull-down tray at the front. They’re particularly easy to load, as the tray includes a spring-loaded paper guide.


Using the P450 is remarkably easy. You can connect a camera, plug in a memory card, drop in a CD or plug in a USB memory drive and then select View & Print from the rotating top level menu. Browsing through the images in your chosen media, you select and edit those you want and then print them out. Other options provide index sheets, slide shows and the ability to burn pictures to a CD-R.

The first thing you notice when you switch on the P450 is that it takes one minute 20 seconds to set itself up. Irritatingly, it does this every time you use it, not just when you change the ink cartridge.


Waiting is something you’ll have to get used to, as it takes roughly two minutes 45 seconds to print a 6 x 4 inch print from any source (Epson’s PictureMate 500 takes around 1:30 for the same size) and nearly half an hour to burn 100 images to a CD-R. A PC using Nero takes around one minute 40 seconds even on a slow, 16x writer. 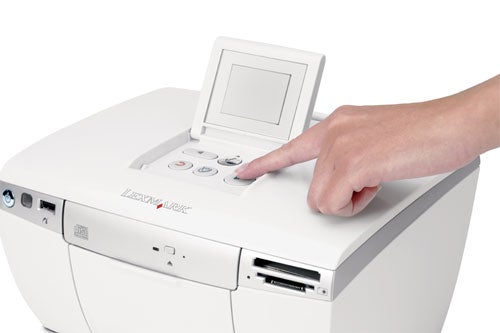 You can print multiple sessions to the CD-R, so you waste no space on the disc, and you can transfer images from a burnt CD to a memory card or USB memory drive, which is handy if you want to take a few photos with you without risking your CD archive. The P450 only identifies jpg files, and can’t cope with formats such as tif or Kodak Photo CD.


Print quality was not great, using the fresh, type 33 cartridge supplied with the printer. Colours looked washed out and there was a noticeable lack of red. We tried cleaning the heads a few times, but with little improvement – we could see breaks in the stripes of cyan and magenta. Swapping for a new type 35 cartridge, again supplied by Lexmark, improved things, but the colours were still not as vivid as from, for example, an HP Photosmart 375. 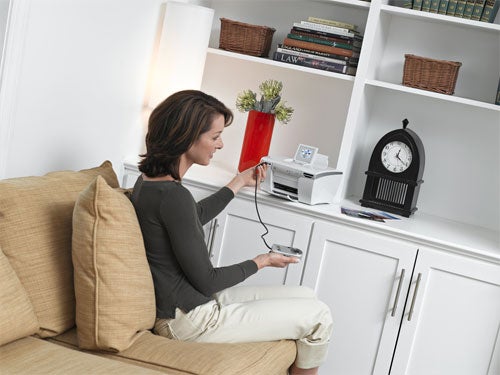 Lexmark will follow up the successful launch of its Photo Printing Pack for the P315 with a similar package for the P450. This comprises a high-yield, type 35 cartridge, good for 140 6 x 4-inch prints, and 140 photo blanks. The company expects this to sell for £27.90 or less, giving a cost per print of just 20p, something of a price breakthrough for photo printing.


This is a versatile little machine, capable of all the standalone functions you’d expect of a photo printer. The addition of the CD-R drive is an excellent archival tool and the ability to display a slide show on your TV and to transfer photos from a camera or phone, via an optional Bluetooth link, adds to its practicality.


The only downside to all the functionality is the actual printing process. The prints we produced took a long time to come and the print quality didn’t compare well with Lexmark’s rivals.