We’ve already looked at two of the all-in-ones in Lexmark’s new range, but one of the biggest stories in the company’s publicity is the touchscreens fitted to the high-end machines. The first we’ve seen is the Interact S605 and the front part of the machine certainly looks a bit different.


The high-gloss control panel has just one button, to power the whole machine on. Everything else is controlled by the touchscreen or one of a series of fixed, illuminated touch buttons arranged around it. The main section of the touchscreen has quite an iPhone feel to it, roughly the same size and with a series of icons you can flick between and tap to activate. 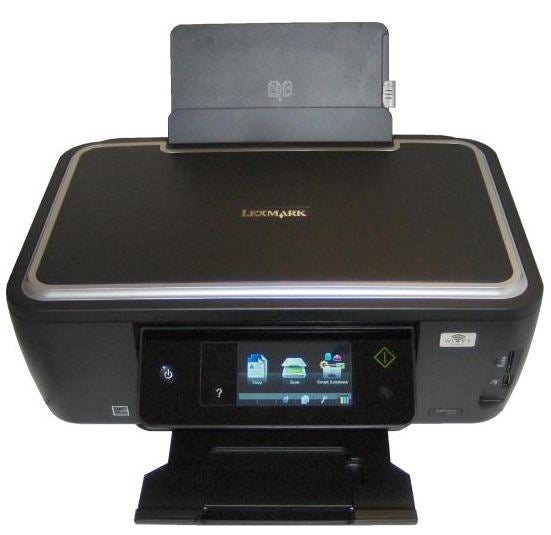 The touchscreen is capacitive, so responds well to touches, though the angle of the screen can sometimes mean you hit the button above the one you’re after, until you get used to. The touch controls cover the same functionality as physical ones, so you have screens dedicated to copying, scanning and printing from memory cards, among others.


Apart from the touchscreen, facilities on the S605 are pretty similar to those in machines further down the range. This is not one of the Pro range of machines, so there’s no Automatic Document Feeder on the lid of the scanner, though it does have a business-like textured top, rather than an annoying high-gloss finish. A single memory card slot takes SD, Memory Stick and xD cards and there’s a USB socket which handles both PictBridge and USB drives.


Paper feeds from a 100-sheet, fold-up tray at the rear to a pull-out output tray at the front. 100 sheets is a low capacity, even for a machine aimed at the home. The only data socket at the back is USB, but most people will make use of the machine’s wireless connection.


Setting up the wireless connection is straightforward, whether you have WPA or WPS security on your network. With WPA, an on-screen keyboard enables you to enter a pass phrase, without the need to connect temporarily via USB.


Lexmark’s new Vizix print system is in evidence on the Interact S605, with its four, separate ink cartridges and semi-permanent head. This is all pretty easy to set up, though cartridge fitting would benefit from a more positive click when each one is pushed into place.

Lexmark has taken advantage of the S605’s touchscreen to introduce what it calls SmartSolutions. These are printing-based applets which can be downloaded and stored in the printer itself and provide extra functionality, above and beyond what is already installed on the machine.


SmartSolution Centre is still in its early days, so has a few rough edges. After setting up an obligatory user account and after the site had insisted we downloaded the latest versions of first Flash and then Java, we finally got to see the 14 apps available for download.


They range from shortcut apps to enable single-touch scanning or copying, to a series of photo viewers and even an MSNBC news feed which displays on the printer’s screen. Oddly, the photo viewers demand an RSS feed from an online gallery, when we would have thought the most useful connection would be to a photo folder on a PC networked locally to the printer.

Lexmark claims 18ppm for black print and 11ppm for colour in normal print mode, using ISO testing protocols. Our own tests, which include processing time, aren’t quite as optimistic. Our five-page black text print completed in 52 seconds, which is equivalent to 5.77ppm, but this rose to 6.90ppm on the 20-page test.


Duplex print, supplied as standard on the Interact S605, is reasonable, as pages don’t wait as long for ink drying between sides as on, particularly, Canon machines. Our 20-side document, the same as the 20-page simplex test, but printed on both sides of the paper, gave a speed of 3.68 sides per minute.


Colour print returned a speed of 3.33ppm, so we’re getting back to the levels of speed exaggeration that were prevalent a year or so ago. Which isn’t to say that the Interact S605 is slow; in fact, the machine has a very reasonable turn of speed when compared with other inkjet all-in-ones in the same price range. 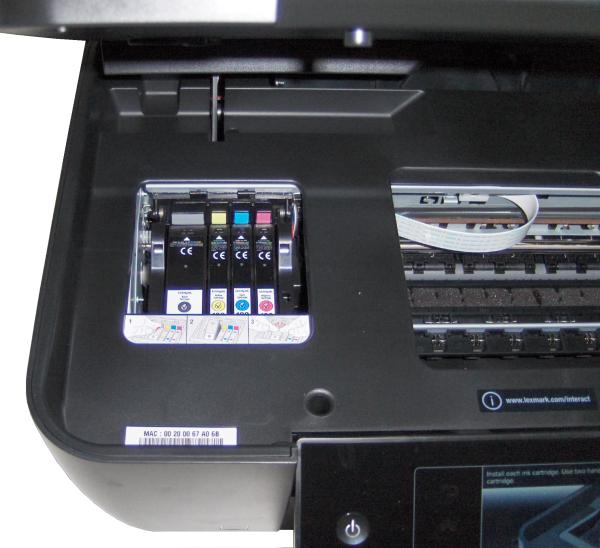 15 x 10cm photo prints ranged from 43 seconds to 1:07, depending on source and, using Lexmark’s latest PerfectFinish paper, produced photos that were very well-balanced, with good natural colours and high levels of detail in different lighting levels. Output is much closer to the quality achieved by Canon and HP than was the case with Lexmark’s old printing system.


The Interact uses the same CIS scanner as the Interpret and Prevail Pro, reviewed recently, and produces very similar plain paper copies. Colours are impressively close to the originals and, elsewhere, text print quality is good, though still not quite as clean as from the best offered by some of its rivals.


We’re relying on Lexmark’s own online supplies site for cartridge costings, as the machines are too new for the Vizix cartridges to have worked through to the discount sites. As it stands, costs of 4.70p for an ISO black page and 11.83p for a colour one, both including 0.7p for paper, are on the high side. These figures are likely to improve over time, though.


This is a good, well featured all-in-one printer, whose touchscreen control has plenty of promise. As the SmartSolutions library grows, it could become a valuable extension to the functions available on this and other Lexmark printers supporting it. This gives the S605 tangible benefits, even if the rest of the machine offers very similar features and performance to other printers in the range.