While Lexmark may be known for cheap and cheerful ink-jet devices in the home market, it has a completely different reputation in the business sphere. The company’s range of mono and colour laser printers for workgroups and SMEs are highly regarded. The C532dn is designed for network use and comes with a built-in duplexer, with resulting paper economies.


There seems to be a move within the colour laser market to build printers with smaller footprints but more height. Lexmark has certainly taken this on board and produced a monolithic machine with its in-line print mechanism housed vertically inside. It’s even taller, if you add the optional 550-sheet, second paper tray.


A standard 250-sheet paper tray slides in at the bottom in a conventional way, but the front face of the tray folds down to form a single-sheet multi-purpose feed, which is more unusual. Paper feeds out to a substantial tray, hanging out the back of the machine at the top. This is mirrored by the paper input tray at the bottom, which also projects from the rear. 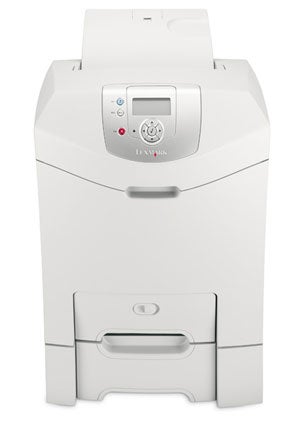 The printer’s control panel includes a four-line by 16-character LCD display, which could do with some form of illumination and a less reflective front face. There’s also a five-button control ring and three other buttons down the left-hand side, to call up the menu, back out of a menu option and stop a current print job. USB 2.0 and Ethernet ports can be found in a recess at the left side of the printer, which makes them easier to get at, but slightly more unsightly.


The C532dn isn’t a simple printer to set up. It’s full of tapes, packing pieces and spacing sheets, all of which have to be removed before it’ll work satisfactorily. It even has a power-on diagnostic which checks you’ve removed everything.


The printer uses an in-line laser mechanism, with separate toner and photoconductor cartridges for each colour – you slide each toner cartridge into the body of the machine and fit a photoconductor drum into a corresponding assembly inside the fold-down front cover. All consumables come pre-installed in a new machine, which is why there are so many covers and spacers to remove.


Automatic software setup only installs the PostScript 3 emulation, not the PCL 6 one. This seems an odd choice, as PCL is nearly always faster than PostScript and there’s little observable difference in print quality between the two.

Lexmark quotes print speeds of 22ppm and 21ppm for black and colour print, respectively. Our five-page text print completed in 24 seconds, giving a real-world, non-draft mode, black print speed of 12.5ppm and the colour text and graphics job, again five pages, took 27 seconds, giving 11.1ppm. The ratio is about right, though as usual we see around half the claimed figures.


The quality of prints from this machine is very high. Text output is crisp and clear with very little spatter and good, clean diagonals and curves. Colour graphics are also well reproduced with bright, solid colours and good text overlay, showing neither text spatter nor mis-registration with the underlying colours. 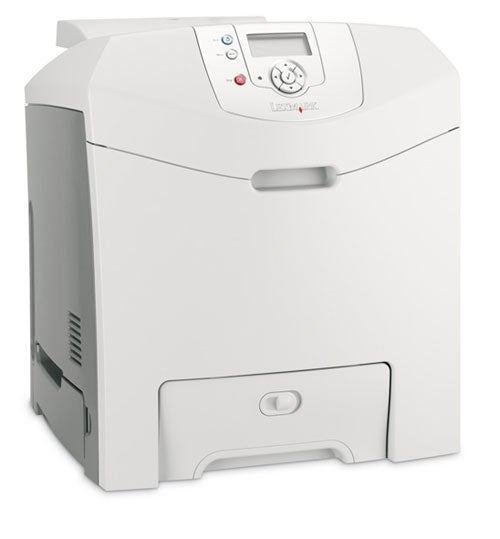 Even photo reproduction, not normally a strength with laser printers, is better than usual. Of the two print modes available, normal and best quality, there are some slight improvements in the colour palette using best quality print. Neither of the images looks particularly natural and there is some slight banding apparent in the skies section of the image, but overall results were impressive for a colour laser.


When printing in duplex mode, on both sides of the paper, the C532dn prints the first sides of two sheets at a time, taking each back in from the output tray for printing their second sides. The machine is quick and efficient at duplex printing, though with all forms of print it’s quite noisy. Lexmark claims a noise level of 53dBA, but we measured it consistently at around 60dBA, an intrusive sound level. 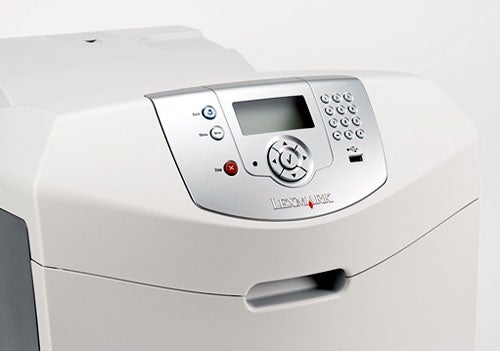 Using the cheapest options throughout, we reach a five per cent black text page cost of 2.02p and a 20 per cent colour page cost of 7.92p. The text page cost is slightly higher than some of the printer’s main competitors, but this is countered by the colour cost, which comes in at the lower end of the scale.


This is a good colour workhorse for a small office or a workgroup within a larger organisation. Its black and colour output is well above average and although it’s slightly fiddly to maintain, it’s quick and relatively inexpensive to run.