If you’re a serious digital photographer you’ll be well aware of Lexar’s reputation in the flash memory market. Lexar has traditionally been manufacturing high-quality, high-speed memory cards for digital cameras for some time now. In fact in our recent memory card group test Lexar walked away with the Editor’s Choice awards for both CompactFlash and SD cards! But Lexar also makes USB keys and when I heard about the tiny new JumpDrive FireFly I thought I’d better take a look at one. 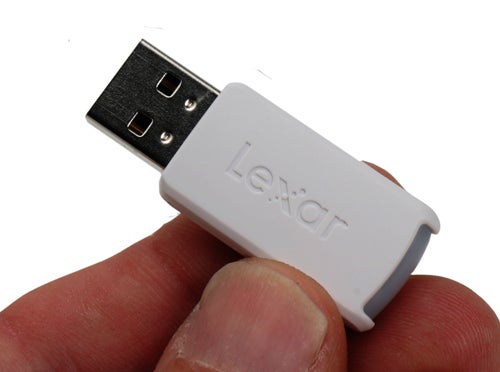 The original Lexar JumpDrives were rugged, rubber affairs, designed to hang from your key ring. The FireFly takes a different approach though. For a start the FireFly is tiny – in fact it’s one of the smallest USB keys I’ve seen. I’m not generally a fan of USB keys with removable lids, since they inevitably get lost, but at least this one clicks onto the back of the device so there’s less chance of you misplacing it. Without the lid the FireFly weighs a truly amazing 6g, while the lid bumps that up to 9g. It’s tiny too, measuring just over 4cm long, so you really won’t notice it in your pocket – so much so that I kept thinking I’d lost it, when in fact it was hiding in the corner of my pocket. 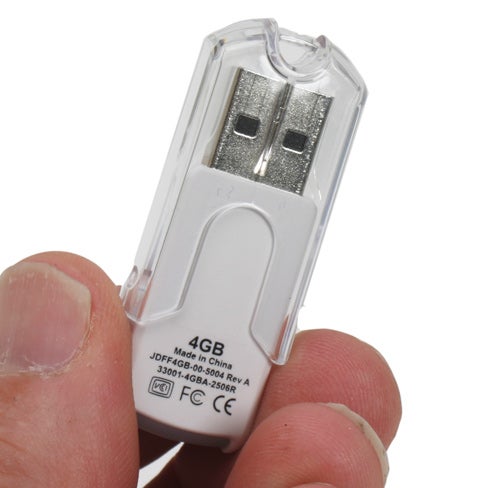 The FireFly comes in several colours, but my review sample is a simple shade of white. I doubt that this is a coincidence, since it makes a certain amount of sense to appeal to Mac users these days. In fact the FireFly does match the new Mac Book very nicely – the blue light (yes, another blue light) at the end of the FireFly looks good too. But the most amazing thing about the FireFly is that despite its diminutive size, it packs a whopping 4GB of storage space! Now, I can still vividly remember buying my first 1GB hard disk and thinking just how capacious that was, so having a 4GB drive that weighs 6g and measures 4cm is, without a doubt, pretty damn impressive.

In a market awash with USB memory keys, it really did look like Lexar had something special with the FireFly. There was no doubt that the size, weight and capacity were all on the money, so the only things left to consider were performance and price. Considering just how well Lexar’s memory cards performed in our group test, I expected great things from the FireFly, but unfortunately my expectations proved to be unfounded.


It’s unusual to find truly slow USB keys these days, but bizarrely Lexar’s latest small on the outside, big on the inside example proved to be just that. To be fair, it was the write speeds that were woefully disappointing, while the read speeds didn’t seem to be too far off the pace. I copied a 351MB video file to the FireFly which took a substantial three minutes 15 seconds, while reading the same file back took only 40 seconds. But when I performed the same tests with my 1GB SwissBit memory key, the read was slightly faster at 35 seconds, while the write was positively blistering by comparison at 41 seconds. 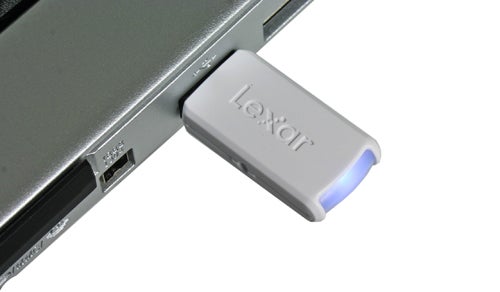 Next I used a folder containing 238MB of digital images. Again the read speed on the FireFly wasn’t bad at 27 seconds compared to 24 seconds on the SwissBit key. But when it came to writing the FireFly beggared belief, turning in a time of 15 minutes 25 seconds, while the SwissBit managed two minutes 15 seconds. Considering that one of the major selling points of the FireFly is its capacity, its incredibly slow write speeds make that capacity somewhat moot. After all, would you really want to copy multiple gigabytes of data to a memory key if you have to wait hours for it to finish?


Then finally we have the price to consider – at just over £60 for this 4GB version, it’s not the cheapest USB key on offer, but it’s not the most expensive either. To be honest, the tiny size, light weight and attractive design could possibly have convinced me that the FireFly was worth paying extra for, but the poor performance erases any such notions.


Lexar has come so close to getting everything right with the FireFly, but has stumbled at the performance hurdle. No one was more surprised at this than I, since traditionally Lexar has led the way with flash memory performance. There’s no denying that the form factor, weight and design are perfect, but I just can’t recommend a high capacity memory key that takes an age to write data.