Such real life horrors aside, however from Canabalt to Flappy Bird, short and sharp bursts of play like this are what endless runners do best, and iPhone has never been short of these manic quick fixes. Let’s Go Rocket, then, blasts off into a market where its competition is already sizeable, meaning bringing something new to the table here is down right essential. There’s no point launching a game if all it does is offer more of the same. So, does Let’s Go Rocket fly?

The biggest difference between what’s on offer here and the millions of other endless runners no doubt already installed on your mobile is that, rather than tracking from side to side, the space adventure style nature of Let’s Go Rocket means the game runs from bottom to top. Touching the screen fires the boosters on your rocket sending you soaring, whereas no contact at all sees your craft drift down towards the bottom of the map. Success, then, comes from knowing when to boost and knowing when to drift, as falling off the screen altogether or making contact with any of the game’s obstacles signals your instance demise. 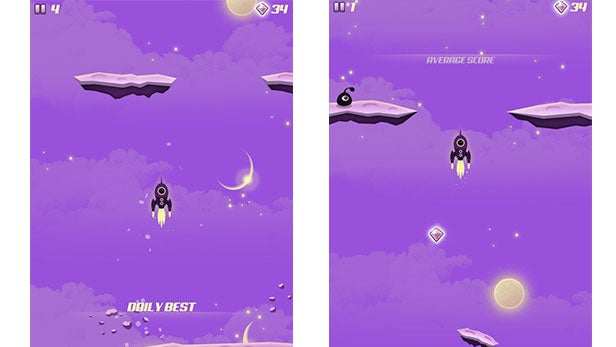 And, boy, there are a lot of obstacles out there. As you might expect, the levels in Let’s Go Rocket are randomly generated, meaning that every play through you have offers a slightly different experience. Nevertheless, the core challenge remains the same: firing ever upwards, you have to time your boosts so you slip through a number of moving objects (typically rocks) which scatter the path ahead. Some shift from side to side, some rotate, some sit stagnant, and you can never be entirely sure what’s coming next or how it’s going to interact with play until it streams onto the screen.

As with all endless runners, this means you’re forced to stay on your toes from beginning to end. Miss time your boost even slightly, and it’s game over. Indeed, even when compared to some of the most difficult endless runners available, Let’s Go Rocket is especially unforgiving. It’s entirely possible to crash into your very first obstacle without it serving as a symbol of your ultimate failure as a gamer: In short, Let’s Go Rocket is just plain hard. 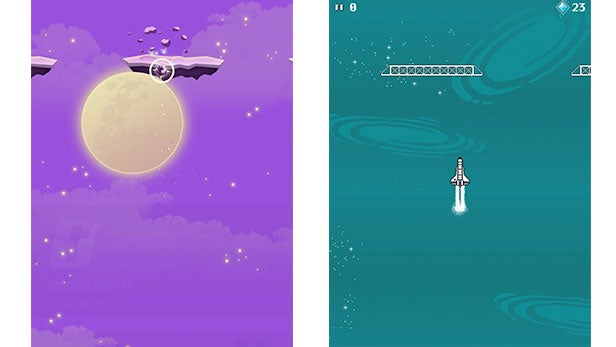 So why play on? Well, the ability to pick up gems that you can then trade in (along with real cash) to unlock new skins is a nice little touch, with the atmosphere of the game – if not the process – changing dramatically depending on which skin you play through. Close calls are also marked with a nice little ‘prang’ sound effect, triggering sparks to fly on the screen that really illustrate the skin of your teeth nature of many successful runs.

It’s judging just what constitutes ‘success’, in fact, that ultimately serves as Let’s Go Rocket’s signature. Your last posted distance, your average distance and your best ever distance are all marked on screen as you play (passing the latter triggering a nice little confetti blow out, that ironically usually diverts your attention and leads you to crashing headlong into the next available comet) all serving as a bit of extra incentive, and the futuristic and haunting soundtrack somehow manages to give your experience an illogical feeling of realism. 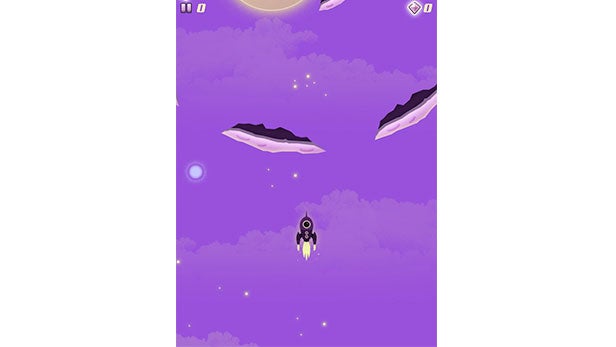 All in all, it’s a nice little package that perfectly understands that mobile games need to be easier to play without dominating your time, but it’s hard to say just what Let’s Go Rocket does other than taking an idea the marries perfectly with the structure of an endless runner and – if you excuse the pun – running with it. There is, in truth, nothing really new here that suggests Cobra Mobile has managed to unearth a previously unexploited area of the endless runner genre. Rather, this is simply a more polished, refined version of all that has gone before, meaning Let’s Go Rocket is unlikely to stay in orbit for quite as long as its creators may expect.

Verdict
A proficient but ultimately run-of-the-mill endless runner, Let’s Go Rocket has smart visuals, accessible gameplay and a slick soundtrack, but it does nothing that its genre mates haven’t been pulling off successfully for years, leaving it as a case of style over substance.