The Bluetooth detachable keyboard cover is an optional accessory not bundled with either the £250 or £280 3G versions of the tablet. At the time of writing, the Lenovo site lists the item as ‘coming soon’ without a price, but the US shop has it for $79.99 so we’d guess it’ll be between £50 and £70. So is it worth it?

Well, it offers three useful functions, and manages them with varying degrees of success. As a tablet cover, we weren’t impressed. Although it fits to the device nicely and looks stylish, the magnets that are supposed to hold it in place for easy carrying frequently slip off and even when it does stay on, it feels more than a little flimsy. We’d question how much protection it could offer to the screen – certainly it’s not the kind of accessory that would allow you to toss the tablet in your bag and forget about it. 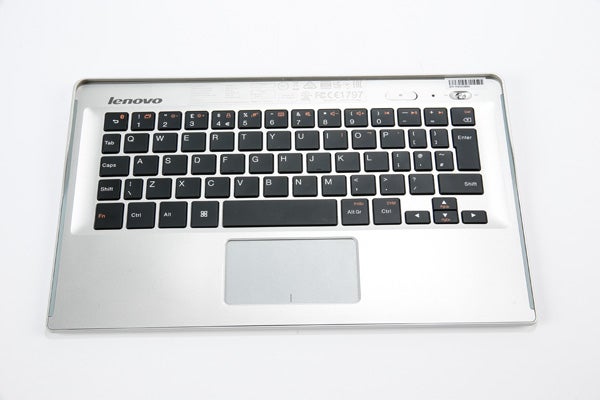 It fares better as a keyboard, but with the caveat that sub 11.6-inch laptops aren’t really that common, in part because keyboards of that size aren’t comfortable for extended use. The keys are responsive, and it feels nice to type on, but it’s uncomfortably cramped and no substitute for a proper laptop. It does beat using the on-screen keyboard, though.

Its final bit of appeal is the touchpad sat below the keyboard, presenting the unusual sight of a cursor appearing on top of the Android interface. Despite Android not being built for this kind of traditional input, we were pleased to discover that using it was fine, and even functions like two finger scrolling worked without fuss. That said, it does come with the same limitations of the keyboard section: it’s tiny and mistakes are very easy to make – most irritatingly, occasional finger slips sees your cursor typing merrily away in the middle of a completed paragraph. Annoying. 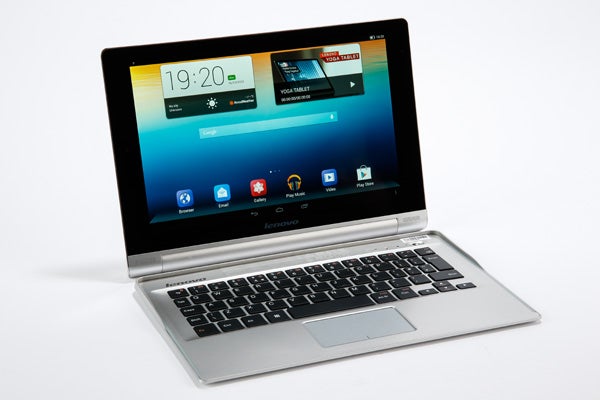 Should I buy the Lenovo Yoga Tablet 10?

Being brutally honest, probably not. While we like the design and are very impressed with the battery life, it just feels like another also-ran in the incredibly competitive Android tablet space. Its specifications are pretty average and benchmarks suggest a weaker performance than cheaper machines like the Tesco Hudl and even the aging iPad 2. On top of that, the 1,280 x 800 screen resolution is lower than some mobile phones.

So, what to get instead? If you’re wedded to the idea of 10-inch tablet as this price then the Archos 97 Titanium HD is a outsite bet. It was £20 cheaper at the time, and now it can be had for as little as £158 from Expansys. If you don’t mind a slightly smaller tablet, the Kindle Fire HD 8.9 was also a favourite when we reviewed it back in March, and again it was £20 cheaper. Given the gaming performance is similar, you could even try to source a cut-price 2011 iPad 2 (though you won’t find one direct from Apple, which still charges £329.99 for the 2011 tablet.)

On balance, however, we’d favour simply opting for a 7-inch tablet like the Nexus 7 at this price. Moreover, if you’re interesting in a tablet with a keyboard then you might be better off looking at the likes of the Asus Transformer Book T100, the Windows 8 tablet that costs just £350 with keyboard included.

A pleasing design and fantastic battery life is let down by a low resolution screen and dull performance. You can do better than this for not much more.

Next, read our tablet buyer’s guide for more advice on buying a tablet