The jump in resolution ensures that the Lenovo’s panel is crisp throughout, and quality is high. Skin tones are warm without becoming oversaturated, and the rest of the Lenovo’s colours are similarly vivid. Black levels are deep, with good distinction between similar inky shades. The Yoga’s screen handled whites just as well – at the top end of the scale we were still able to detect subtle differences. 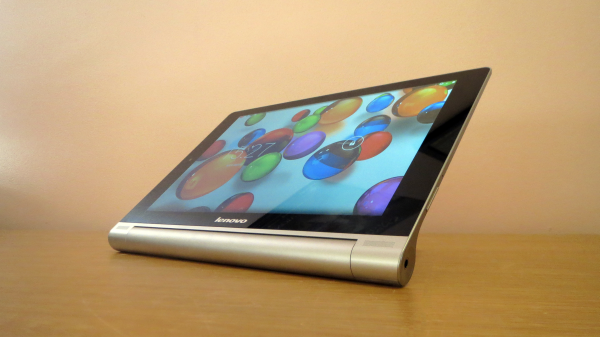 It’s no surprise that the Lenovo impressed: its 341 nit brightness level beats most laptops, and the 0.27 nit black level is just as good. Viewing angles were excellent, with little clarity lost even when tilting the screen at odd angles. That said it’s a glossy panel, which can be irritating.

The Lenovo has the same resolution as the Sony, and better quality – there’s no sign of oversaturation, and the brightness and viewing angles are better. It’s a great screen but Lenovo’s tablet still can’t topple the mighty Samsung Galaxy Tab S 10.5, which has better quality and a higher resolution.

Dolby technology and software bolsters the pair of forward-facing speakers. It’s an impressive name to have attached to audio kit, but the speakers delivered mixed quality. At default settings, volume is decent and the treble has a pleasing snap and crunch, but the high-end is tinny. Louder music saw the range crush together and lack depth.

Dolby’s app serves up four music modes, but none impressed. The Music mode increased the volume, but the extra punch provided at the bottom of the range hampered the rest of the sound. Dolby’s Game and Movie modes sounded similar.

The Dolby app also provides a graphic equalizer. Full customisation is available, and there are three default options, with Open proving the best. The Rich and Focussed settings suffer from that familiar, overbearing bass.

The Lenovo’s speakers are reasonable, and they’re acceptable for playing games and watching movies – but they’re no better than the Samsung’s efforts.

The Yoga ships with Android 4.3, but our sample was able to immediately download an upgrade to Android 4.4.2.

Lenovo has added its fair share of apps to Android, but it’s taken a different approach to Samsung – there’s nothing here that’s as intrusive as TouchWiz or its Magazine UX. The biggest change to Android’s main view is the app drawer – that’s gone, with icons confined to as many as eighteen home screens. 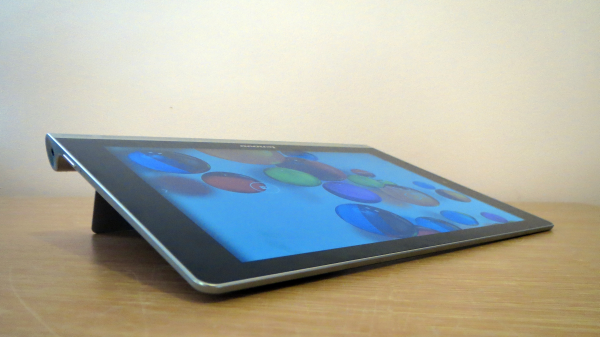 Lenovo has made small tweaks throughout the OS. Swipe from the right on any home screen and you open the Smart Side Bar, which provides quick links to the gallery, camera, Google Play and other apps. The settings drop-down menu is augmented with audio profile and timeout toggles and a link to the Dolby app.

Standalone apps vary in their usefulness. The Power Manager has normal and power-saving modes, screen brightness adjustment and software and hardware power usage graphics. The ShareIt and SyncIt HD tools do little that existing file-sharing and cloud apps won’t.

The Security HD app is odd: its ad blocker is a welcome addition that can banish notification adverts, but it also houses options to speed up the Yoga’s performance by closing apps and to move apps between internal storage and a microSD card.

The Yoga is powered by a Qualcomm Snapdragon 400. It’s a quad-core processor that’s clocked to 1.6GHz with 2GB of RAM, and it’s a respectable mid-range part, but it can’t compete with the hardware inside the competition. Sony deploys a Snapdragon 801 that runs at 2.3GHz, and the Samsung has a quad-core Exynos 5 chip clocked to 1.9GHz. Both rivals have 3GB of memory.

The Lenovo’s lesser chip scored 1,414 in the Geekbench test. It’s a respectable pace, but unable to compete with the Samsung’s 2,669 result or the 2,614 scored by the Sony. 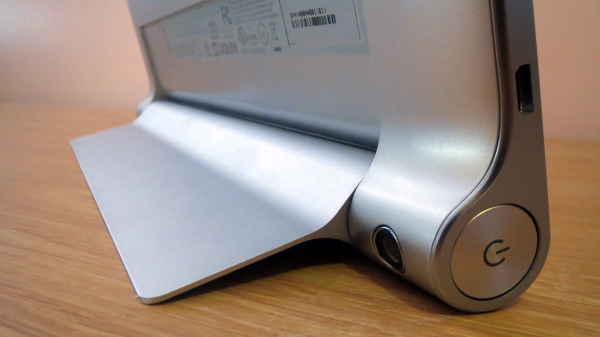 Gaming tests had the Lenovo trailing even further. The Yoga’s 3D Mark Ice Storm result of 4,937 is several times slower than the Sony and Samsung slates – the Xperia scored 18,984, and the Samsung managed 13,500.

We didn’t notice any performance problems in real-world use. The Lenovo’s home-screens zipped around smoothly, and apps loaded without delay. Games ran well, with no hint of sluggishness during Real Racing 3 and Assassin’s Creed Pirates, both of which are intensive 3D titles. We’re concerned about the future-proofing potential of the Yoga, however – high-end games in the future could struggle to run smoothly.