What is the Lenovo Yoga Tablet 10?

The Lenovo Yoga Tablet 10 tells you pretty much exactly what it is from the not-so-catchy title: it’s a 10-inch tablet from Lenovo. The Yoga part of the name refers to the kick-stand it has on the back, which allows it to stand on one end, much like the Apple Smartcovers do the iPad, but also adds couple of other positions to make it more flexible. It runs Android 4.2 Jellybean, and comes in at either £249.99 or £279.99 depending on whether you want a 3G model for on-the-move browsing. A middling price, but does that come at a high performance cost and can it join the ranks of our best tablets? 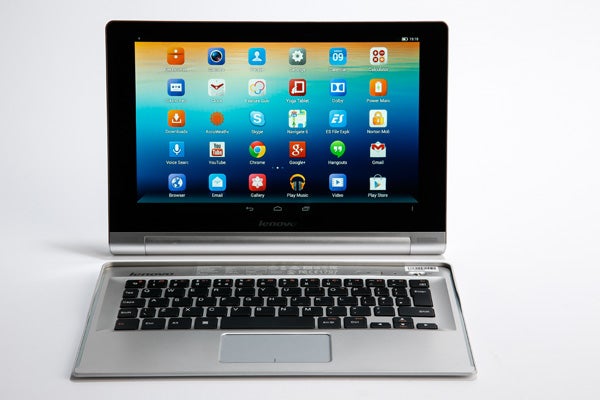 Given all tablets are essentially a touchscreen and bezel, there’s not much room for design deviation, but Lenovo does its best to add a little variety. Although the front is a standard black bezel, thinner on the longer landscape sides than the portrait like the new iPad Air, below a Lenovo logo is a curved silver edge which backs onto a raised tubular spine with two front facing speakers, meaning that even tech novices could tell this apart from Apple’s tablet pacesetter.

Turning it over sees the silver styling taking over throughout. A Lenovo logo is embossed into the back, there’s a camera offset to one corner of the raised tubular section where the kickstand can be pulled out. This minimalist style extends into its connectivity, and there’s really not much to write about here: the circular power button takes up the whole of one end of the kickstand section, with the headset jack at the other, there’s a volume rocker and a micro USB port, which doubles up as its charging station.

There’s also a microSD card slot tucked away behind the kickstand (though it’s pretty tough to get the card out once it’s in, leading to a horrified few moments when we thought a 16GB card was trapped). We assume this area is also where the SIM card would go in the 3G enabled version, but our review version didn’t have this, so there’s just a hollowed out space. 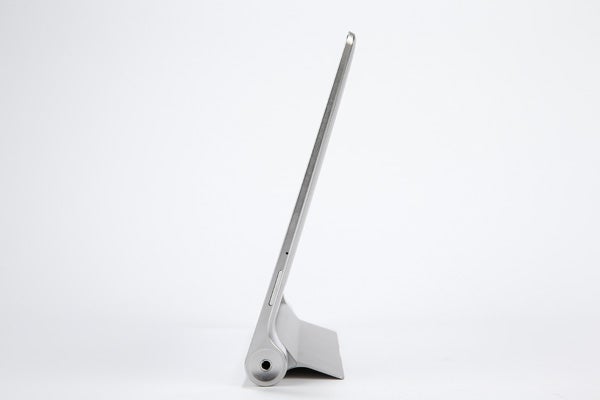 It’s actually quite a nice design, although there’s no way of keeping the tablet flat: even with the kickstand away, the tablet is slightly raised. We don’t see this as a problem, as it’s comfortable to hold, and if it’s on a table most people would want it slightly raised anyway. To our eyes, it looks stylish, and it feels solidly built. Plus, because there are no physical buttons, you can hold it whichever way you feel comfortable and the screen will adapt without any finger acrobatics.

At 605g it’s not hugely heavy (though still 136g more than the iPad Air), and aside from the tubular spine, it’s pretty thin as well. Lenovo boasts that it tapers to just 3mm in thickness towards the sides, and that’s true, but negated a bit by the spine which stands out a good 21mm. Taking an average, the majority of the screen comes in at under 6mm, which is thin enough for us. The spine is actually rather useful for carrying it, and the ‘ledge’ it creates makes steadying camera shots that bit easier than holding it from the sides as with most tablets. 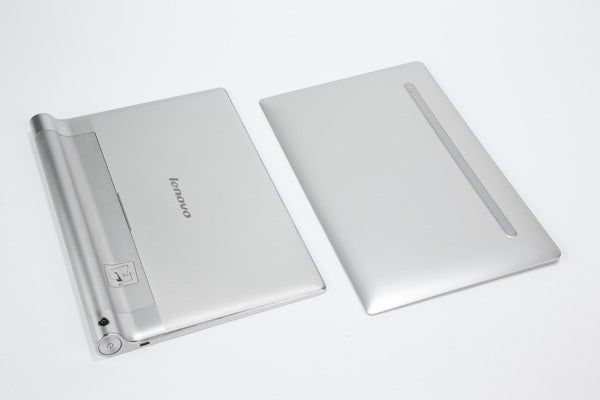 Unfortunately, it all begins to go wrong as soon as you switch it on and feast your eyes on the low quality screen. Lenovo’s promotional material promises the display offers ‘stunning high definition visuals’, but the 1280×800 resolution actually means the icons look stretched and blocky. Most 10-inch tablets manage at least 1920 x 1080, and some recent high-end tablets we’ve looked at such as the Toshiba Excite Write and Samsung Galaxy Note 10 have delivered resolutions of 2560 x 1600. Even the £120 Tesco Hudl offers a 1440×900 display and the 1280 x 800 put out by the Yoga Tablet is only slightly higher than the £135 Moto G smartphone (1280×720). Not impressive in a tablet that costs over £100 more.

It doesn’t get much better than this: even at top brightness, it’s not particularly searing, and the colours feel very unbalanced, with greens in particular feeling far too vibrant — previewing a fairly blandly coloured bush on the camera app resulted in an off-puttingly bright green shrub on screen.

That said, to give Lenovo its dues, the viewing angles are very good indeed, and should you have a few people gathering around the screen, there’s no doubt that everybody will be able to see things clearly, especially as the kickstand is flexible enough to adjust the angle it displays at to an impressive range. It’s just a pity the low resolution and poor colour accuracy negates this pretty strong selling point.