What is the Lenovo Yoga Tablet?

The Lenovo Yoga Tablet is the Chinese manufacturer’s latest iPad rival, with the Android powered device available in both 8-inch and 10.1-inch form factors. Featuring virtually identical specs, the two tablets differ only in screen size and battery capacity, with each running a quad-core CPU, 5-megapixel camera and a claimed 18 hour battery life.

With the entry-level, 16GB Wi-Fi editions of the 8-inch and 10.1-inch models priced at £199 and £249 respectively, the Lenovo Yoga Tablet is competitively priced, but does it have the performance to match? We’ve gone hands-on to find out. 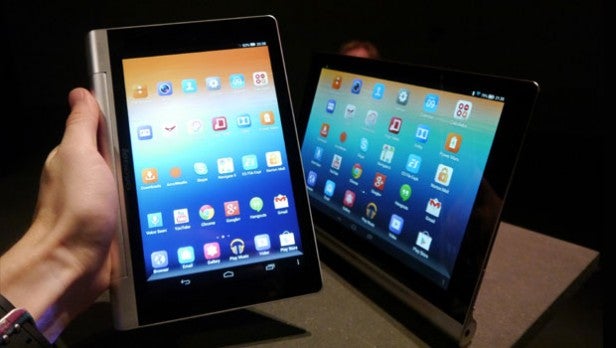 This rounded edge makes the Lenovo Yoga Tablet look remarkably similar to the wireless Apple keyboard, which comes bundled with an iMac. Although this unusual design makes the tablet stand out from the competition, this is not necessary a bad thing. During our hands-on time with the device, we found this curved design feature added to the tablet’s ergonomics, making it easier to hold the Yoga Tablet one-handed. 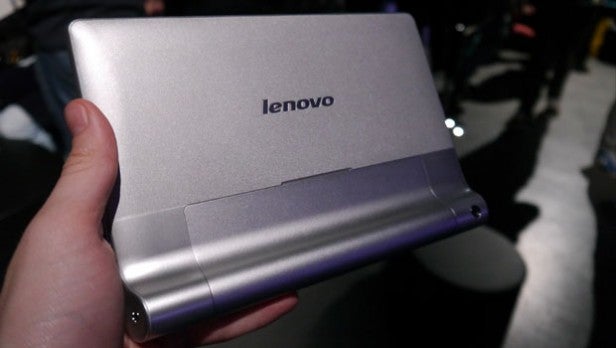 As well as looking the part, the silver bodied tablet also feels premium. The metal components offer reassurance in the hand, suffering from no undue bend or flex issues when put under considerable amounts of pressure. Although the unusual edging gives the Yoga Tablet a slightly lopsided balance, held by the rounded edge this not an issue.  At 401g and 605g respectively, neither is outstandingly light or unusually heavy.

Completing the tablet’s design-based party piece, the bulging edge acts as a hinge for a discreetly placed stand. The stand is a natural extension of the standard tablet, offering multiple positioning options to suit varying needs. It is a solid addition with a reassuringly firm action. What’s more, the Yoga Tablet’s power button and 3.5mm headphone jack sit in the ends of the rounded design feature. 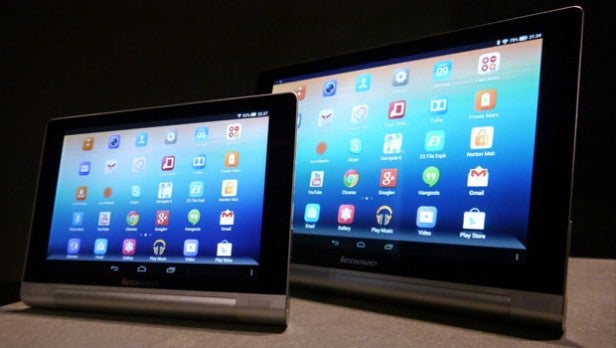 To hit such a wallet-friendly price point Lenovo has had to cut corners somewhere, and sadly one of the biggest areas it has in the screens. Both the 8-inch and 10.1-inch options feature the same 1280 x 800 pixel HD display which, although a reasonable offering, is a considerable step behind the Full HD offerings found on the similarly-priced Google Nexus 7 2 (it’s actually 1,920 x 1,200) and LG G Pad 8.3.

The Lenovo Yoga Tablet’s screen quality is not the worst on the market, and certainly not at such a reasonable price point, but it is still a major stumbling block when compared to some of its market-leading rivals. Although less noticeable on the 8-inch model, due to the 1280 x 800 pixel resolution having to be spread over a smaller area, it’s enough to make you think twice.

On the 10-inch model, things can get a little grainy, text isn’t the sharpest and there is a little fuzziness around the edges of details in images. Although much clearer on the 8-inch model, image quality is still far from ground-breaking, with nothing like the definition of smaller, higher resolution tablets.

In terms of touch, based on first use we have no complaints with the Lenovo Yoga Tablet. The device was quick to respond to all gesture-based commands, with the display panels adding 10-finger multitouch alongside a 178-degree viewing angle available. 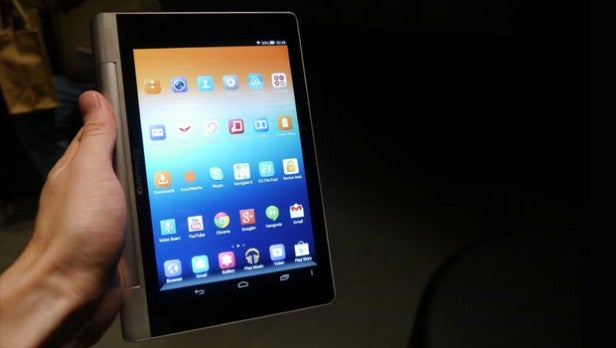 On early impressions, performance wise the Lenovo Yoga Tablet offers a pretty middling experience. Powered by Android 4.2.2 with a light Lenovo themed skin, the tablet is instantly familiar and easy to navigate. Sadly, a lack of standout or ‘wow’ features on the software front fails to set the tablet apart from the broad competition.

Running a 1.2GHz quad-core processor alongside 1GB of RAM, the Yoga Tablet is no slouch. However, the cheap MT branded CPU is no match for the Qualcomm Snapdragon 800 or 64-bit A7 chips currently doing the rounds in the latest smartphone and tablet powerhouses. As such there is still a noticeable performance gap between the new Lenovo tablet and the industry leaders. For most standard tasks, however, the Yoga Tablet will run the show without a single stutter. 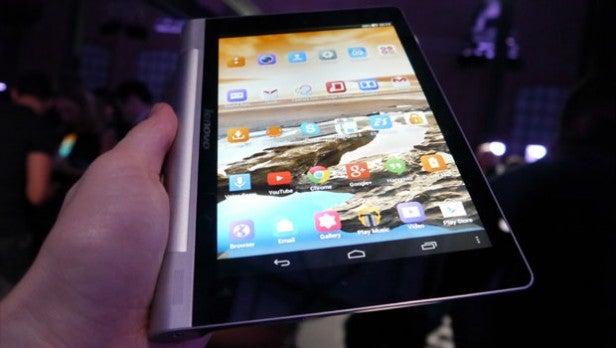 Although the tablet benefits from Dolby audio options and dual forward-facing stereo speakers, in the bustling demo area we were unable to properly assess this addition and so will address it in our subsequent Lenovo Yoga Tablet review.

With the Lenovo Yoga Tablet available in both 16GB and 32GB storage options, those with more demanding storage requirements will be pleased to see microSD card expansion up to 64GB is also present. Although an additional memory card will add to the price slightly, this is now commonplace across most Android tablets.

With the 8-inch Lenovo Yoga Tablet running a 6000mAh Lithium-Ion battery and the 10-inch model a 9000mAh power supply, both tablets are tipped to support a battery life in the region of 18 hours. Naturally we cannot vouch for the accuracy of these claims following our hands-on time with the tablet. Stay tuned for the full review for a detailed analysis of the tablet’s staying power. 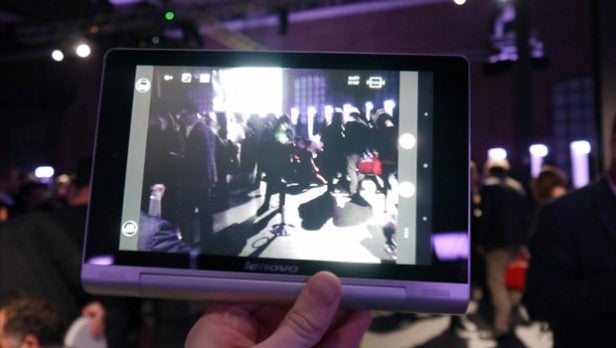 The Lenovo Yoga Tablet’s camera is another area where the Chinese manufacturer has had to make concessions in order to keep the price low. With a 5-megapixel camera on the rear bereft of the now common add-ons such as integrated flash and optical-image-stabilisation, the Yoga Tablet’s camera credentials are added to by a secondary, 1.6-megapixel front-facing option.

We must stress, however, that these early camera tests were performed in a dimly lit demo room and as such more detailed testing is required in our upcoming full Lenovo Yoga Tablet review.

Strangely, the Yoga Tablet’s secondary camera fared better than its big brother with the challenging lighting. Although far from a truly positive addition, the forward-facing camera performed on parallel with the likes of its rivals, including the Nexus 7 and iPad mini. 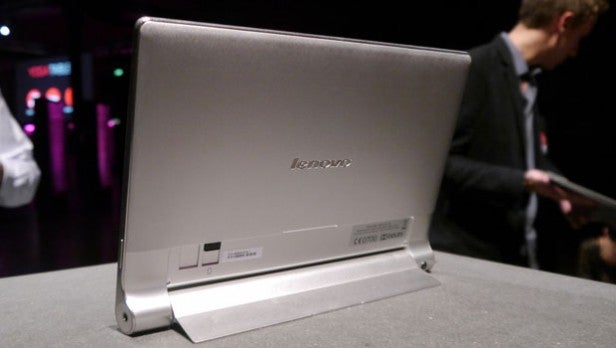 While we can make our peace with a low grade camera, the Lenovo Yoga Tablet’s weak screen is a harder pill to swallow and really does damage an otherwise strong package. The tablet, in both its 8-inch and 10-inch guises, is a very positive addition from Lenovo. The 10.1-inch model might not be on par with the iPad Air, but as an Android-based offering, it offers an overall setup to rival any Samsung tablet. Similarly, thanks to a competitive price, stunning design and moderate spec, the 8-inch Lenovo Yoga Tablet will could give the Nexus 7 2 a run for its money.