Unlike most Android tablets, the Lenovo is powered by an Intel X5 Atom processor, not a Qualcomm Snapdragon.

The
CPU’s paired with 2GB of DDR3 RAM, which puts it behind similarly priced
Android competitors. The Samsung Galaxy Tab S2 comes with a more robust 3GB of
RAM.

The Yoga Tab 3 Pro performed reasonably well when
benchmarked, despite its lower memory. The tablet scored 48,867
on Antutu and ran in with a 3,269 multi-core Geekbench score. On the gaming-focused 3DMark Ice Storm Unlimited test the Yoga Tab 3 Pro scored
25,774.

The only minor performance
issue I noticed was that, on occasion, the tablet would stutter slightly
when navigating between windows – though this happened very rarely and
never severely slowed down the device.

The
Yoga Tab 3 Pro on paper has a pretty impressive camera setup, at least
by tablet standards. Lenovo’s loaded it with 13-megapixel rear and
4.9-megapixel front cameras. This puts it a cut above most tablets,
which usually at best have 8-megapixel rear cameras.

But be warned: more megapixels don’t necessarily mean fewer problems when it comes to camera tech. 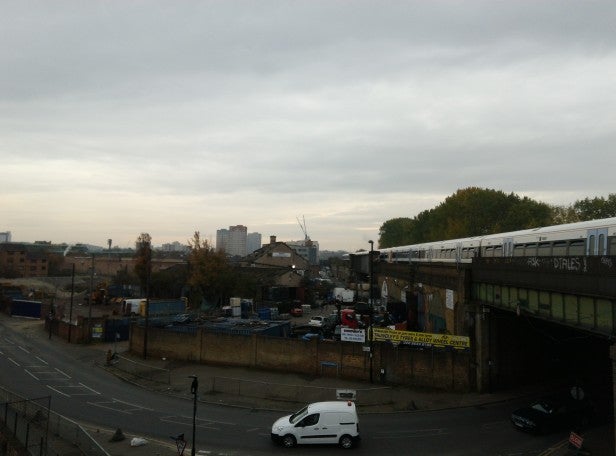 There’s a noticeable lag between when you
push the on-screen shutter button and the picture actually being taken.
This makes shooting a moving target, or capturing an impromptu scene on
the tablet all but impossible.

I struggled to discern a
noticeable quality difference between pictures taken on the Yoga Tab 3
Pro and competing tablets such as the Galaxy Tab S2. Image noise becomes an issue when you start trying to use the camera
in low light, just as it has on all the tablets I’ve reviewed.

The front camera, while a little low-res for selfies, is more than good enough for video calling.

Lenovo’s
crammed a giant 10,200mAh non-removable battery into the Yoga Tab 3
Pro. That makes most tablets’ power packs look outright diddly.
By comparison the Nexus 9 runs using a 6,700mAh battery and the iPad Air
2 runs off a 7,340 mAh power pack.

Lenovo claims the battery
will offer up to 18 hours of mixed use off one charge. I never once managed
to get a full 18 hours’ video playback, but found the
battery life still to be pretty impressive.

The
Yoga Tab 3 Pro also deals with gaming fairly well. It generally
discharges 15-20% of its battery per hour when playing games.
This is in line with most 2015 Android tablets, such as the Galaxy Tab S2.

With
everyday use I generally managed to get three days’ average use out of
the Tab 3 Pro. Average use entailed sporadically surfing the web, regularly
checking my emails and social media feeds, plus a couple of hours of
gaming and video streaming per day. 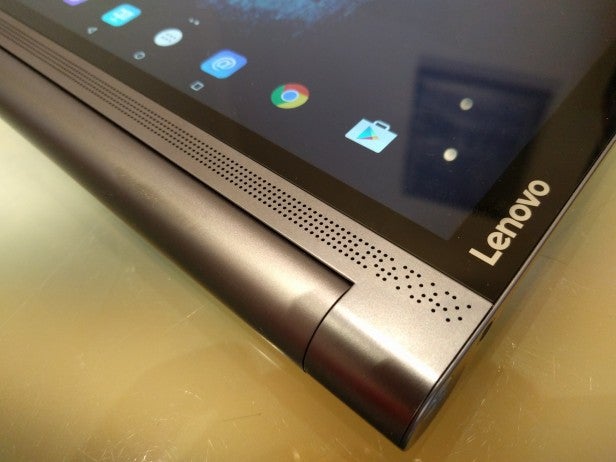 Dolby Atmos on mobile is a nifty feature that’s
designed to let the tablet create a virtual version of Dolby’s latest surround sound tech, which is used in many cinemas.

The mobile app also has useful features, such as a sound
equaliser that lets you optimise the speakers for particular types of
audio, such as games, music and movies. While this is great for
people who like to tweak sonics, out of the box I found the sound quality to be impressive.

The Lenovo Yoga Tab 3 Pro’s bass is noticeably chunkier than competing tablets – to the point it
makes the iPad Air 2 and Galaxy Tab S2’s speakers sound outright weedy.
Mid-levels and highs are also strong and never sound drowned out.

The
tablet’s maximum volume is also great. Using it to watch TV shows 12ft
away with the projector turned on, I was able to clearly hear audio with
the speaker set to 40% volume hassle free. 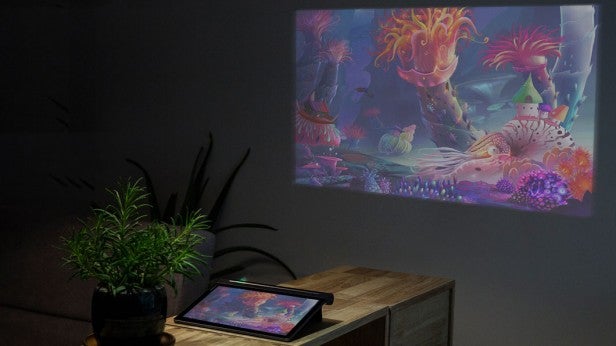 Should I buy the Lenovo Yoga Tab 3 Pro?

The
Lenovo Tab 3 Pro is a unique tablet focused on entertainment.
The innovative stand mechanism, robust design, custom projector and
stellar speakers make it one of the best tablets around for watching
movies, playing games and listening to music.

However, the design
makes it noticeably heavier than rivals, meaning people who
want a light, travel-friendly tablet may prefer a more traditional model, such as the iPad Air 2 or Nexus 9.

Its only other shortcoming is Lenovo’s Android skin, which adds a little too much bloatware for my liking.

The Lenovo Yoga Tab 3 Pro is the best entertainment tablet to arrive this year.