The Lenovo Yoga C630 13 is one of the most affordable laptops available with 4G support and a 2-in-1 form factor. Factor in the super-long battery life and ultra-portable design, and this becomes a great option for students. However, it's worth bearing in mind that the ARM architecture suffers compatibility issues with 64-bit applications and isn't very powerful when compared to more traditional laptops at the same price point

The Lenovo Yoga C630 13 is the latest 4G-enabled notebook to run using a Qualcomm mobile processor. If that sets off alarm bells, it should.

In the past, we’ve found that while the low-powered CPU provides a stellar battery life, compatibility issues with the chip’s ARM architecture and Windows software can make carrying out even basic tasks a bit of a pain. This, plus hefty upfront costs resulted in key ARM-laptops and tablets, such as the Surface Pro X and HP Envy x2, failing to wow us.

When the Lenovo Yoga C630 first arrived last year, carrying a £900-plus price tag, we were concerned history was going to repeat itself. But thanks to a moderate price cut this year, the laptop has actually become pretty decent value. Just don’t expect it to do anything beyond basic office work and web browsing. 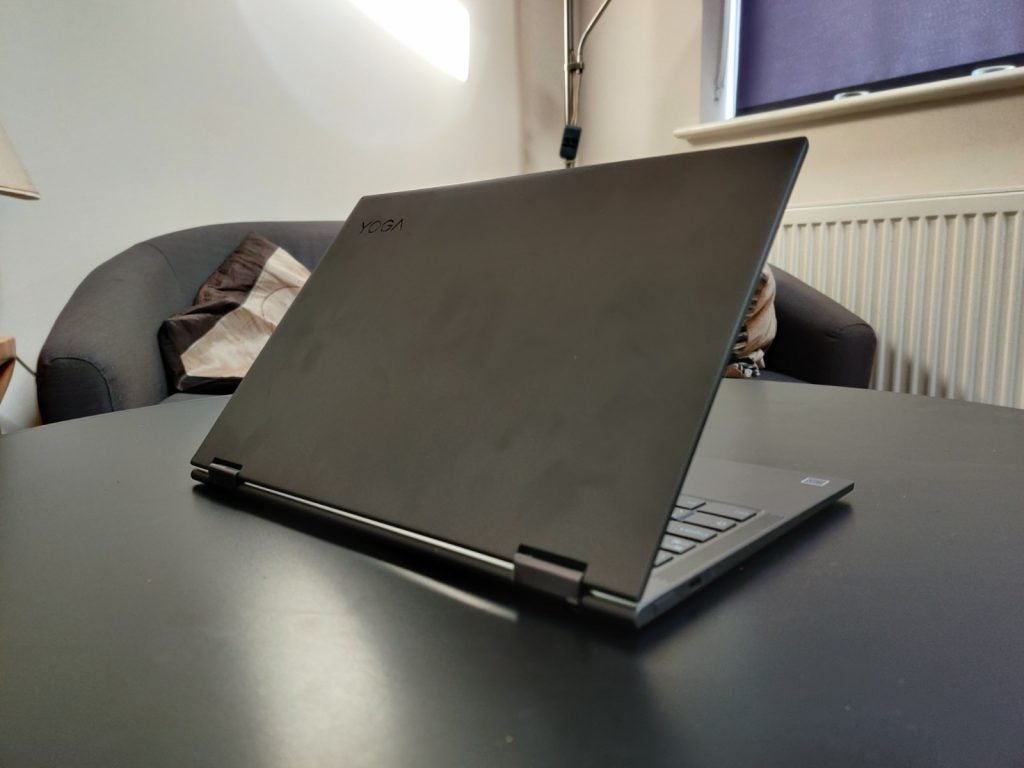 The Lenovo Yoga C630 sports a fairly unassuming design, but will be instantly familiar to Yoga users of past.

It features a basic, dark grey mixed magnesium and aluminium alloy clamshell design and also comes with a 360-hinge. This lets you fold the screen all the way round to resemble a slightly chunky tablet, or prop it up into a free-standing tent mode. The latter is particularly useful when using the device to watch TV and movies when travelling on a train or plane.

The design isn’t groundbreaking, but it has a pleasingly premium feel for a £700 device. Open it up and you’ll be treated to dinky screen bezels, side-facing twin speakers, and a fingerprint scanner.

Using the device as my work and personal laptop for a week, I was impressed with the C630 13’s build quality. It survived being lugged around London in my satchel – and an accidental encounter with the corner of a table without any noticeable damage.

The only downside for work users is the lack of any full-sized USB ports. Instead, you get two side-facing USB-C inputs, a SIM tray and 3.0mm jack. This is fairly standard, but the lack of a Thunderbolt will be an issue for those who want to connect the device to a monitor.

Personally, I’d have also liked to have seen Lenovo add an SD card slot. In the UK, the C630 4G is available with only 128GB of storage, which – if you’re not careful – can be filled fairly quickly, even with basic office use. 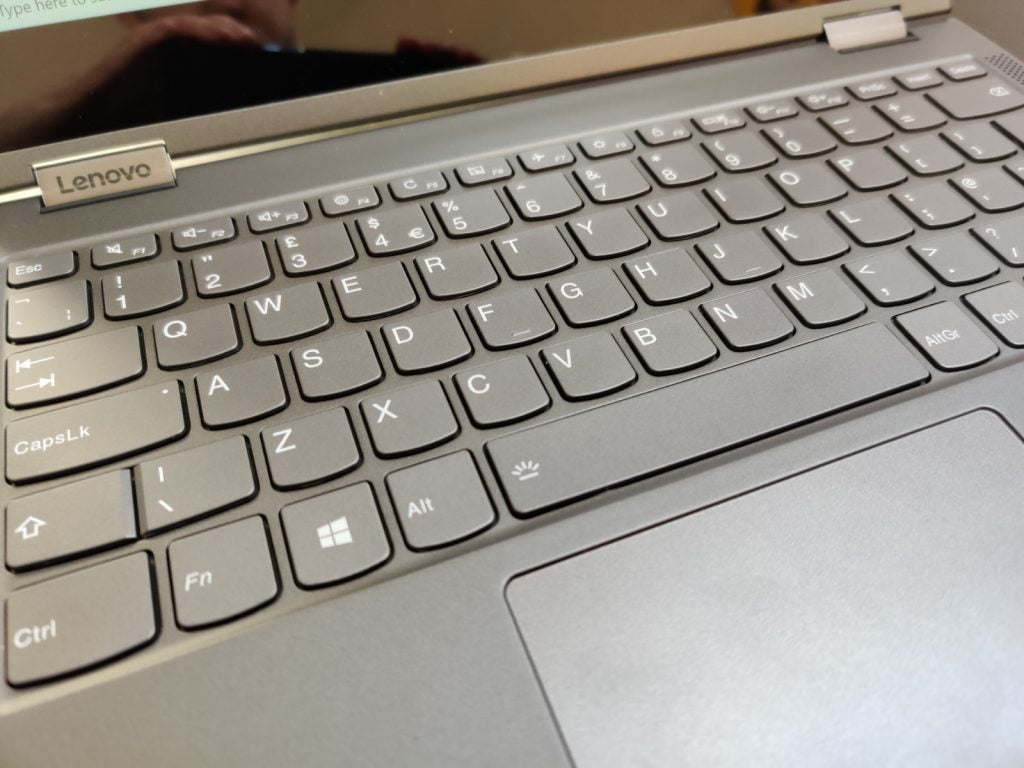 The C630 13’s keyboard is the one area that feels a little cheap. Although the keys are suitably spread out, the chiclet keyboard feels fairly shallow and doesn’t offer much tactile feedback. In addition, the case noticeably flexes when met with even moderately heavy typing. As such, the keyboard is fine for taking notes and basic office work, but you wouldn’t want to write a novel on it.

The trackpad is more impressive. It’s suitably large and, while I couldn’t find anything to indicate whether or not it’s Microsoft Precision Certified, it feels responsive and easily recognised multi-touch inputs. Throughout testing, I experienced no issues using it to edit essays and navigate the laptops Windows 10 OS.

The active pen also performs well. I used it to doodle quick sketches and take notes in Windows stickers, I never once noticed any latency; I found it was more than sensitive enough.

Note that the C630 13’s 1.2kg weight also makes it light enough to comfortably carry and use as a digital notepad, which is an added boon for students.

My only quibble is that there’s no way to dock the pen to the laptop, which is a pain if you plan to use it on the go. On more than one occasion I forgot to take it with me to the office. 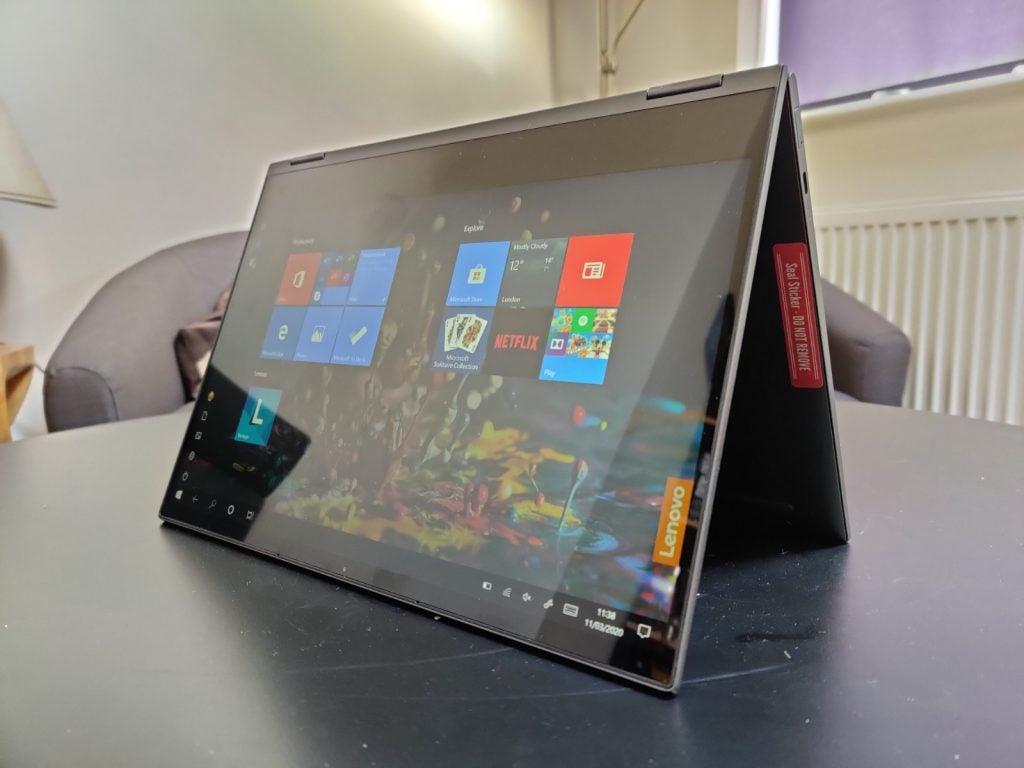 Lenovo Yoga C630 13 display – Fine for office tasks, but not for creatives

To the naked eye the screen is more than good enough. It’s fairly bright and sharp enough to read web pages and carry out basic office tasks. The only obvious issue is that whites look a little muddy for my liking, and the glass becomes reflective fairly quickly. But both issues are ones you’ll experience on most laptops at this price.

My experience testing the screen with our lab colorimeter mirrored my real-world findings. The 245-nit max brightness isn’t anything to write home about, even by £400 laptop standards. But, coupled with the 0.2-nit black level, it gives the screen a reasonably dynamic 1294:1 contrast ratio that’s good enough to ensure TV and Netflix content looks okay. The 6254K colour temperature is also actually closer to the 6500k ideal than I expected.

Like all laptops at this price, colour gamut coverage is nowhere close to where it should be for creative work. The 93% sRGB is fine for regular office work, but the display’s below 65% coverage of the Adobe and DCI-P3 gamuts means the screen isn’t accurate enough for any work that will be printed as physical media. Given the fact the CPU isn’t sufficiently powerful for anything but basic photo cropping, this is hardly a deal-breaker.

Lenovo Yoga C630 13 performance – You can install creative software, but running it is a different matter

Performance is a key issue with most ARM-based Windows laptops and convertibles I’ve tested. Generally, this remains the case with the C630 13 4G, which runs using last year’s Qualcomm Snapdragon 850 chipset and 8GB of LPDDR4X RAM.

The device is powerful enough for basic tasks, such as office work, notation and Netflix streaming. But trying to do anything more demanding caused it to tap out. I managed to install creative software onto the device, but I had enough time to make and half-drink a cup of tea whilst trying to open GIMP, let alone use it.

The fact the C630 13 will only run 32-bit apps also means a number of regular services, including most of Trusted Reviews standard benchmarking tests, won’t run on this device. The only one I could get working was Geekbench 5, where the C630 13 achieved below-par score, with even the poorly received Surface Pro X scoring better.

The Huawei MateBook D 14 sees far better scores too, and is actually available at a cheaper price. The only thing in the Yoga’s favour here, is its 2-in-1 form factor and 4G compatibility.

4G coverage was fine with a Three SIM during testing. Running a speed test – whilst out and about, away from a Wi-Fi signal – it managed the same speeds as the OnePlus 7T Pro I had to hand. 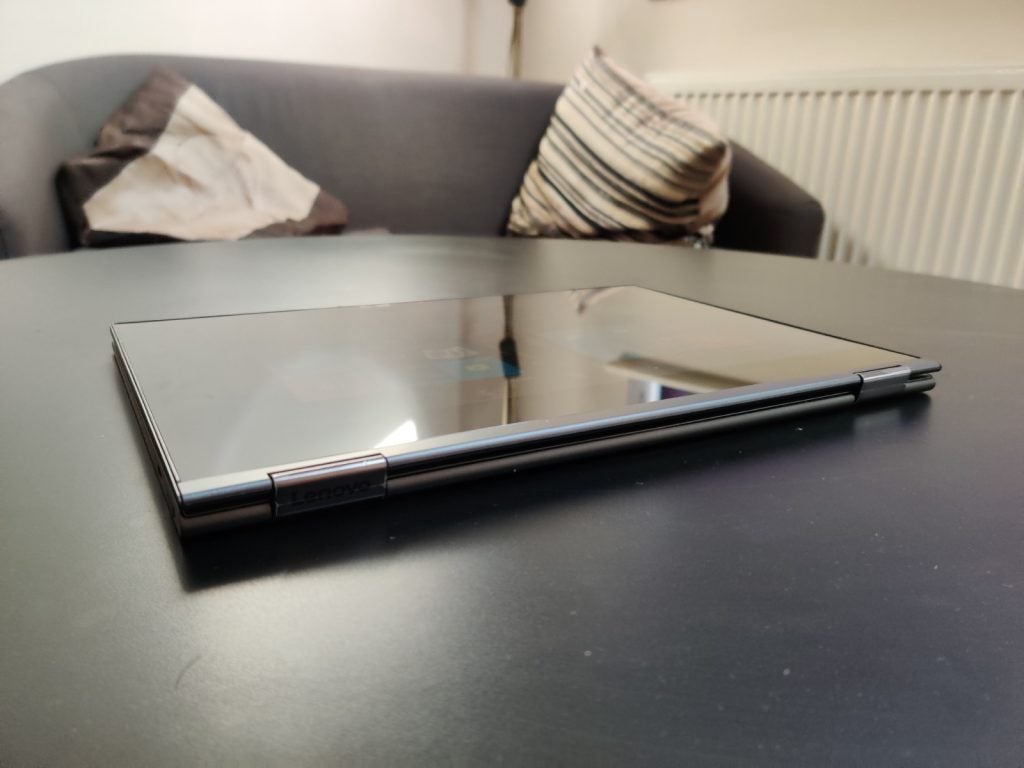 Battery life is traditionally the one area in which ARM-laptops and tablets beat their Intel and AMD rivals. Thankfully, this is true of the Yoga C630 13, which comes with a quoted 25-hour battery life.

Trusted Reviews’ standard battery benchmark doesn’t work on ARM systems, so we tested it by synthetically looping a video file with the screen brightness set to 150 nits. Running this test, the laptop lasted an impressive 20-22 hours on average, which is more than double what you’d usually find with a modern ultrabook.

In real-world use, I found the laptop easily made it through two full days of use. This entailed using the C630 13 as my main work machine through a regular work day, then for sporadic web browsing and an hour of Netflix in the evening on Wi-Fi.

If you’re after a laptop for basic web browsing, word processing and Netflix then you could do far worse than the Lenovo Yoga C630 13 (4G). The device has a wonderfully premium, lightweight design, a decent screen and marathon battery life.

The biggest downside is that its ARM-based Snapdragon 850 CPU is a pretty sluggish, and will only be able to handle basic tasks. Despite running on Windows, the performance of this portable is more comparable to a Chromebook than a full-fat ultrabook.

There’s still reason to buy the Lenovo Yoga C630 13, being one of the most affordable devices with 4G support and a 2-in-1 form factor on the market. Students may well find these features incredibly useful, but there’s no denying you can get a far better performance for a similar price.