All configurations of the Lenovo Yoga 700 come with the same 14-inch, 1080p (1,920 x 1,080) multi-touch, glossy touchscreen. So fans of the newer, ultra-high resolution MacBook Retina-style screens will have to look elsewhere.

More importantly, those after a decent-quality screen in general would probably be wise to look elsewhere too, since this isn’t the greatest exponent of image quality I’ve ever encountered.

This might not be immediately obvious. Contrast is impressive at 1,248:1, so you get punchy-looking images, offering bright whites and dark blacks (0.1828 nits) all at once. It also has decent viewing angles, thanks to its underlying IPS screen. However, in most other areas it’s only just adequate.

Maximum brightness is only 228 nits, and although we wouldn’t recommend you use the screen at that level everyday, having the extra 100 nits or so that brighter displays offer is useful in sunny conditions. Like the Yoga 900, it also comes with automatic brightness adjustment turned on, which can be irritating – although here I was able to completely disable it for testing. 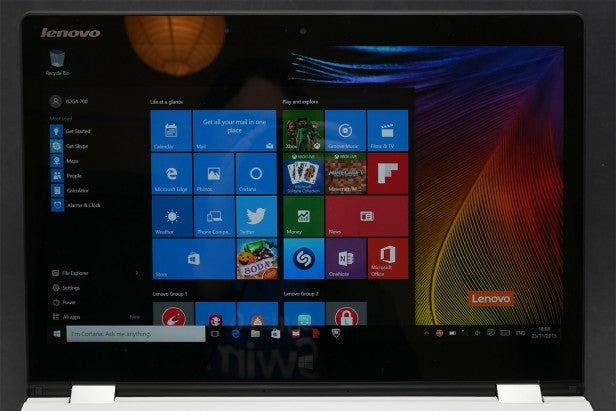 Colour accuracy is also pretty poor, with a colour temperature of 7,219 and sRGB colour space coverage of just 59.3%.

All this adds up to a display that isn’t a patch on higher-end Ultrabooks such as the MacBook, Dell XPS 13 and Asus Transformer Chi T300.

However, in comparison to other mid-range convertibles, it isn’t so bad – most of them choose to compromise on screen quality to keep costs down.

The touchscreen is as sensitive and accurate as we’ve come to expect of modern capacitive touchscreens. Again, it’s no iPad Pro but it’s easy to perform the more basic gestures you’d use on such a device.

Where it falls down is in multi-touch gestures, where either it or its driver/Windows struggles to make for a smooth and accurate feel. As such, I’d tend to avoid anything too clever and stick to using it for play/pausing music, switching apps, swiping through photos and presentations and simple games.

All of which brings us to the Yoga screen’s party trick of being able to fold round completely to create a weird tablet with a keyboard on the back. While it pretty much fails as a dedicated tablet for being too bulky and not really having a good enough screen, there are plenty of scenarios where this setup is useful.

For instance, when watching a movie on a plane, the screen can be reversed so that it stands at the front and doesn’t get knocked by the seat in front. Or, if you’re showing photos or videos to family and friends then a quick tablet mode makes the device easier to hold for multiple people to view at once.

Think of it more as a convenient and versatile touchscreen presentation option attached to a normal laptop.

The Yoga 700’s keyboard is essentially identical to that of the Yoga 3 14, and it’s mostly up to the task thanks to a good layout and the keys being full-size.

However, key travel is not so great and the action is spongy, making for a fairly mushy overall typing feel. 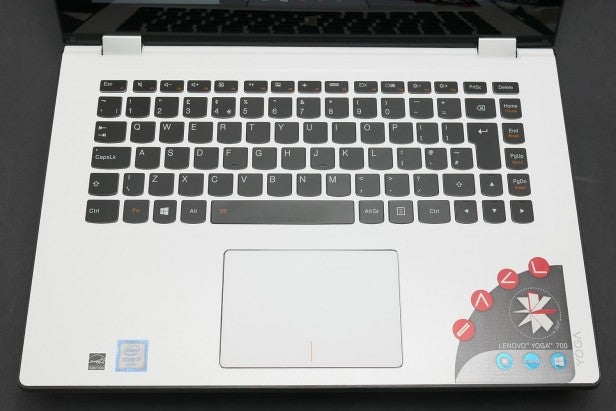 It is backlit, however, which isn’t always a given in this calibre of machine. Note that there’s only one level of brightness, though, so there will be some situations where the keys are perhaps too bright.

As with all previous Yoga devices, the keys and backlight automatically switch off once the display has been flipped beyond 190 degrees.

As for the trackpad, it’s just about passable. It’s of a good size, but its surface doesn’t glides as well as some and its sensitivity and accuracy are only just up to task.

Like the Yoga 900, the Yoga 700 comes with Windows 10 already installed. In combination with the Yoga’s clever hinge mechanism, it makes for the closest we’ve yet come to an easy laptop/tablet hybrid experience.

Windows 10’s Desktop mode makes normal laptop use excellent, while its Tablet mode is seamlessly engaged when the hinge goes beyond 190 degrees, making for an easier touchscreen experience.

Lenovo has also toned down its tendency to install poor software on its laptops. You get a number of debatably useful Lenovo apps and a McAfee anti-virus trial, nearly all of which I’d uninstall.

In my opinion, when you’re finding links to unknown app stores preloaded onto your laptop’s taskbar, you know that your best interests aren’t at the forefront of the company making said device – thankfully, this isn’t the case here.