The Yoga 700 doesn’t lack at all for performance in any area. I’ve tested a version without the Nvidia GPU, but even the integrated Intel graphics are quite capable of playing some basic games. Otherwise, the overall combination of a fast processor, SSD drive and graphics makes for a speedy, if not record-setting, machine.

In my Cinebench R15 test the Intel processor delivered a score of 310, which is ahead of the 287 from the Toshiba Kira and 258 of the Dell XPS 2015. It’s also double what you’ll see on entry-level hybrids such as the HP Elite X2 – but half what is possible from larger, gaming and workstation laptops.

This prowess isn’t fully reflected in its PCMark 7 score, which combines processor, storage, graphics and more into a single score. Here the Yoga 700 delivered 5,040 points, compared to 5,167 for the Kira and 4,879 for the XPS 13.

Looking more closely at the graphics side of things, the Yoga 700 delivers 48,296 points in the 3DMark: Ice Storm test, which again is comparable to the Dell and Toshiba devices; it sits between the two. It’s also again around double what you’ll see on more entry-level devices.

However, the gap in graphics performance when jumping to gaming and workstation machines is significant, with a score that’s more than double being quite common, and some machines even hitting 200,000+ 3DMark points. I’d expect the Nvidia GT 940M GPU option to bump up the Yoga 700’s score up to around 70,000.

For a more real-world example, the Unigine Heaven benchmark delivers a score in frames per second, and the Yoga 700 delivers 17fps at basic detail settings and a resolution of 1,366 x 768. The HP Elite x2 will get you around 10fps and gaming laptops and workstations will hit anywhere from 50fps to 200fps.

Nonetheless, the overall picture is clear, which is that the Yoga 700 is a perfectly capable all-round laptop that’s on par with other slim and light machines. While truly tiny tablets pretending to be laptops struggle to give satisfactory performance, that isn’t the case here.

Lenovo claims up to seven hours of battery life for the Yoga 700, which is a little on the low side compared to the 10 hours or so claimed by the likes of the MacBook Air and Dell XPS 13.

However, in testing this figure proved reasonably accurate: our Powermark test returned a time of 6hrs 51mins.

That’s just about enough to get through most of a working day, but I’d expect this to drop to five or six hours in more general use. 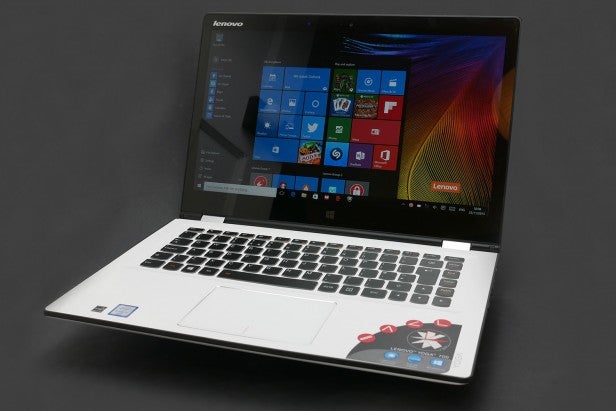 If you’re tempted by the idea of a hybrid laptop/tablet then the Lenovo Yoga 700 is one of the better options out there.

More a laptop than a tablet, it provides a decent overall laptop experience and includes plenty of connectivity and upgradability, despite it being a relatively slim and light device.

Its touchscreen and fold-flat hinge give you a number of interesting usage scenarios. I wouldn’t recommend that you use it as a dedicated tablet, but for occasional use it gets the job done.

Were all this available for around £600-£700 then this would be a good option for those intrigued by the hybrid concept. However, thanks to its mediocre-quality screen, keyboard and touchpad, at £850 it feels a touch pricey, even with its dual-purpose features.

Most obviously, the Dell XPS 13 offers a vastly better overall laptop experience – screen, keyboard, touchpad, build quality – although of course it does lack the touchscreen.

The Lenovo Yoga 700 comes close to being among the best choices for a true laptop/tablet hybrid, thanks to its clever hinge design. Ultimately, however, its build quality, screen and touchpad make it feel of middling value compared to non-touchscreen Ultrabooks of the same price.