The Lenovo’s keyboard looks good. The white sides of each button light up when the machine is turned on, the keys have a gently curved bottom edge, and secondary functions are marked out in orange to match the Yoga’s exterior.

The keyboard feels as good as it looks. The sunken base has no give, so each key hammers down with pleasing consistency, and there’s enough travel in the light, responsive keys to make typing satisfying rather than flimsy and lightweight. It’s got the quality for serious work, and we’d say it was a match for the MacBook – if it wasn’t for the layout. 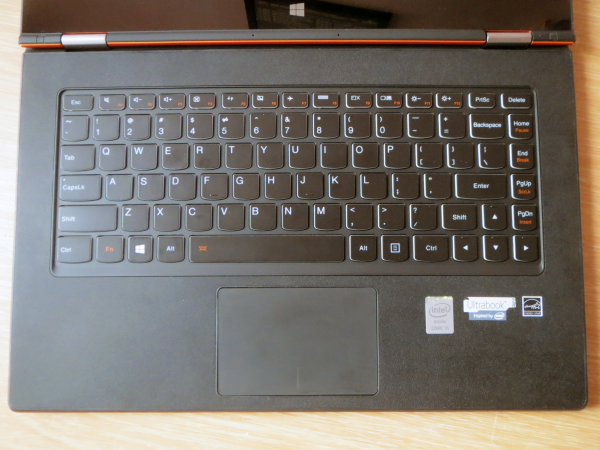 Lenovo has insisted on a single-height return key, a tiny backspace button and a small right-hand shift key, and these are all irritating design decisions that see this system slip needlessly behind its big rival.

The trackpad isn’t as large as the MacBook’s unit, and it’s not as slick, either – no Windows laptop has yet managed to match Apple’s trackpad, which is bigger and has more extensive gesture support. Still, the Yoga’s pad is paired with two excellent buttons, and it’s one of the best options on any Windows machine.

Lenovo bundles the Yoga with several bespoke apps. Its Transition tool can be used to start certain applications and change certain settings depending on which of the Yoga’s four positional modes are chosen. The Motion Control app can be used to navigate photos and other media files with basic mid-air gestures, but we’ve no idea why you’d use it when you’ve got a touchscreen. 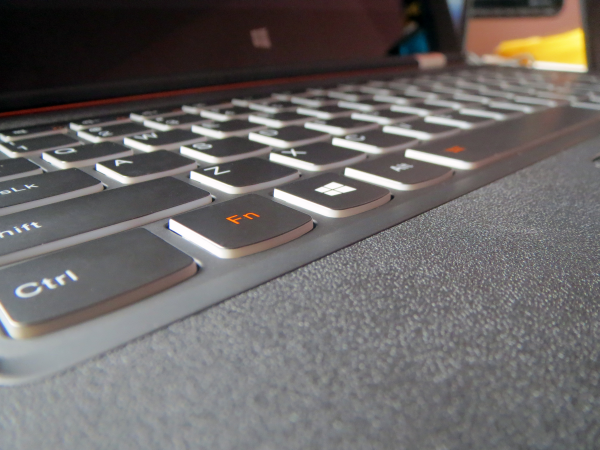 Phone Companion works with Android handsets and is initialised with a QR code – once that’s done, you can text from the Yoga, play phone files on the PC and more, and Yoga Photo Touch allows for basic photo organisation and editing. Camera Man uses the front-facing camera to take pictures and enhance them with frames, stickers and other graphics.

The more expensive machine won’t make a huge difference unless you’re a seriously demanding worker – the 256GB still won’t hold huge media collections, and the Core i7 chip is an incremental upgrade at best. The Core i3 machine, though, won’t feel as slick – the CPU is slower, and that hard disk runs at 5,400rpm and is a significant downgrade, so it’s only suitable if you’re after a system for less demanding tasks. 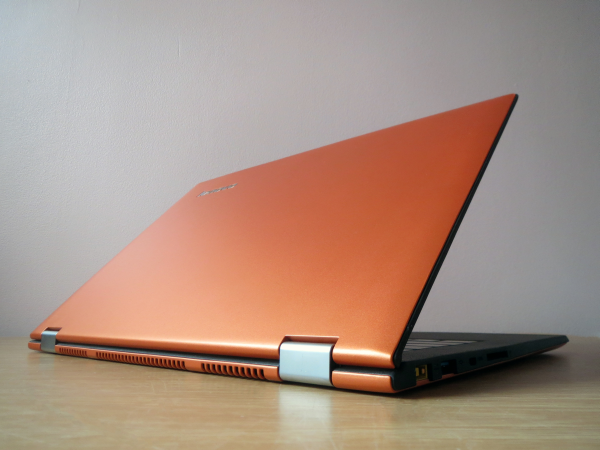 Should I Buy the Lenovo Yoga 2 Pro?

The Yoga 2 Pro is a hybrid, so its use is defined by its two main modes. As an Ultrabook, it’s great: slim, light, with a high-quality keyboard and plenty of power. When used as a tablet, the Yoga falters – like every other hybrid, it’s too bulky to be used in one hand, and it’s not perfect when used in two.

The tent and stand modes are useful, of course, but most other hybrids can do this – and they’re very much secondary to the Yoga’s laptop and tablet positioning.

The screen’s high-resolution is great for work and works well when Windows scales properly, but it’s hampered by third-party software – something the MacBook Air and its 1,440 x 900 panel don’t have to deal with, albeit at the expense of pixels. Both screens are good, but both have faults.

Battery life also hampers this machine. While its longevity is better than cheaper hybrids and laptops, it’s still unable to match the best Ultrabooks and Lenovo’s big fruit-themed rival.

The Yoga 2 Pro is the best high-end Windows hybrid, beating out the Sony VAIO Duo 13 thanks to its comparable price, slimmer frame and better keyboard and touchpad. If you absolutely need a system that combines tablet and laptop functionality, and you’ve got the cash, it’s what you should buy.

The Yoga is best used as a laptop, though, and that’s where the competition arrives. In the Windows realm, the Samsung Ativ Book 9 Plus is a better bet thanks to its all-round quality – and if you’re not fussed about the OS, the MacBook Air is still the market’s best ultraportable.

A stunning, slim design paired with great build quality gets this machine off to a good start, and the Yoga impresses further with great ergonomics and decent performance. The high-resolution screen has its pros and cons, though, and battery life could be better. It’s an excellent laptop but remains unwieldy as a tablet, so we’d think hard about whether you need that functionality before buying this ahead of market-leading Ultrabooks.

Next, read more laptop reviews or take a look at best tablets 2014 round-up