The Intel Core i5-4200U at the heart of this machine is a Haswell processor, but its two cores are clocked to just 1.6GHz – the hallmarks of a low-power part. Still, it’s got Hyper-Threading, a Turbo Boost top speed of 2.6GHz and 4GB of RAM. That’s enough for PC Mark 7 and GeekBench scores of 4,619 and 4,427: comparable speed to the Samsung and Apple, and enough to ensure that applications load and run smoothly – even if they’re more demanding work tools.

In several other key areas, the Lenovo can’t match the MacBook. Both laptops have 128GB SSDs, but the Lenovo’s drive returned sequential read and write scores of 484MB/s and 129MB/s – a good first result undermined by a dreadful second score. The MacBook, conversely, uses PCI-powered storage to hit 709MB/s and 557MB/s. The Lenovo is faster than a hard disk, but hasn’t got the pace of the MacBook – so it lags behind across the board, from application loading to system booting. 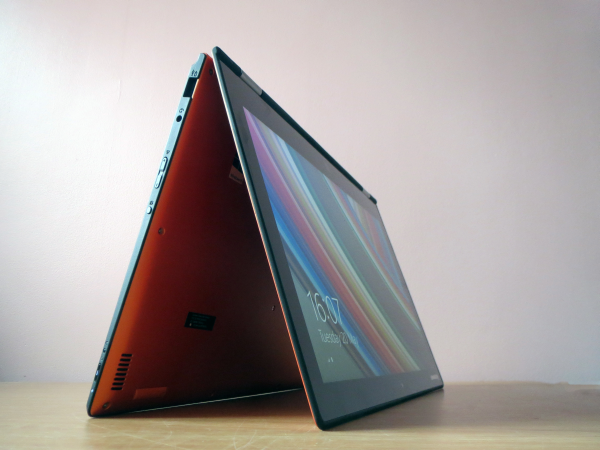 The Lenovo has an Intel HD Graphics 4400 chipset but, again, Apple is better thanks to its HD Graphics 5000 core. The Yoga scored 36,515 in the 3D Mark Ice Storm benchmark and then 574 in the tough Fire Strike test – but the GPU used by Apple has been clocked elsewhere as scoring 39,288 and 745 in the same benchmarks.

Both chips are only good enough for casual gaming and light graphical work, but Apple undoubtedly leads the way in this department.

When idling and running less intensive tasks we had no noise issues, but that’s not the case with more demanding software. During tougher benchmarks and stress-tests the fan was noticeable in our quiet office. It’s not as loud as the Kira, and temperatures never hit hazardous levels, but it’s still obvious noise. 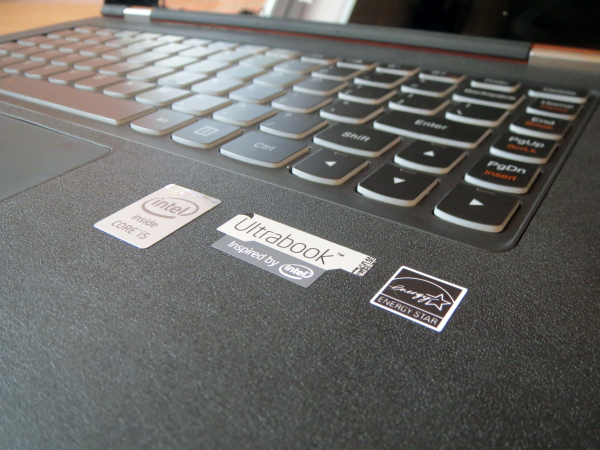 There’s not much room for a battery inside the Lenovo’s svelte chassis, so it’s no surprise that its benchmark result was mediocre. We loaded Powermark and ran our benchmark – which involves video chat, web browsing and idling – with the screen at 40% brightness and Balanced power mode selected.

The Yoga lasted for six hours and 30 minutes in our test. That’s better than fully-fledged work notebooks and it’s better than many budget hybrids, but it’s 90 minutes less than the Samsung, three hours behind the Toshiba Kira, and almost half the longevity of the MacBook Air and its bespoke test.

That means that the Lenovo will only see its way through a full day of work if you’re careful with battery management. One glimmer of hope is the 41% battery yield after thirty minutes of charging – that’s good for a reasonable 2 hours and forty minutes of use.

Used as our main laptop for the review period
Tested for at least a week
Used consistent benchmarks for fair comparisons with other laptops
Reviewed using respected industry benchmarks and real world use
Previous
Lenovo Yoga 2 Pro Review Next
Keyboard, Trackpad, Options and Verdict Review