As a larger ultrabook, there’s plenty of room for a full size keyboard, and the keys enough to get a fast typing speed without frequent typos. This does mean there’s no room for a numberpad, but for our money that’s a sacrifice worth making. It’s also fully backlit, so the accurate typing can continue in low-light conditions.

Our only complaint about the keyboard is the arrow keys, which are pushed really tightly into the bottom right hand corner of the laptop. They’re smaller than the other keys, crammed together and look a lot flimsier than the letters on our test model, actually sitting slightly askew with each other. 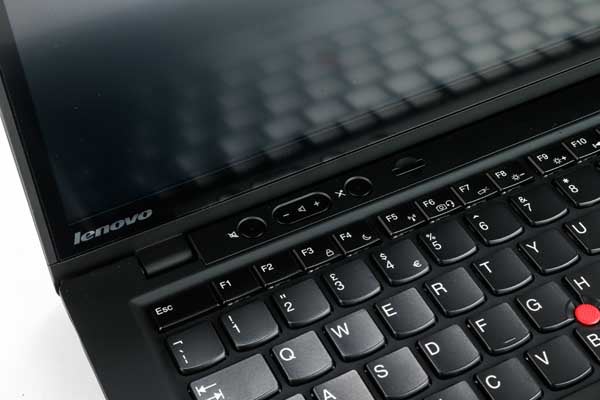 The Thinkpad X1’s touchpad works very nicely in its day to day usage. It’s smooth to the touch with very little resistance, and is spacious enough to pull off the various gestures with perfect consistency.

In Thinkpad tradition, it also has an alternative small, red mouse nub in the middle of the keyboard, nestled inbetween the G, H and B keys. To be honest, we didn’t find this any more accurate than the impressive touchpad, but it’s nice to have the option.

You can use the nub alongwith the tactile left, right and scroll mouse buttons, which are placed between the keyboard and trackpad. You can use these buttons with the touchpad as well, if you prefer. 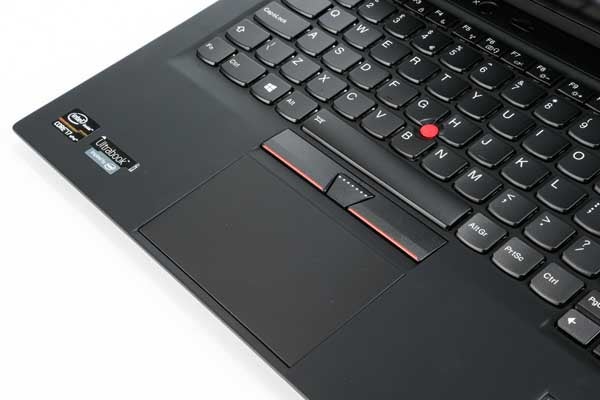 As a thin Ultrabook, the Thinkpad X1 doesn’t have any optical media – no DVD or Blu Ray drive. You can always add an external drive of course, but it does make the whole package less portable.

It does, however, have a couple of extra premium features we should mention. First of all, it includes a fingerprint reader to back up its business credentials of security.

The main premium aspect, though, is that it has undergone what Lenovo describes as ‘military-specification testing’, ensuring it’s less vulnerable to high and low pressures and temperatures, humidity, dust and vibrations. While it doesn’t make the same promises Panasonic does for its Toughbook and Toughpad range (there’s no minimum dropping height guarantee or promise of water resistance), it’s still more than most manufacturers can claim. 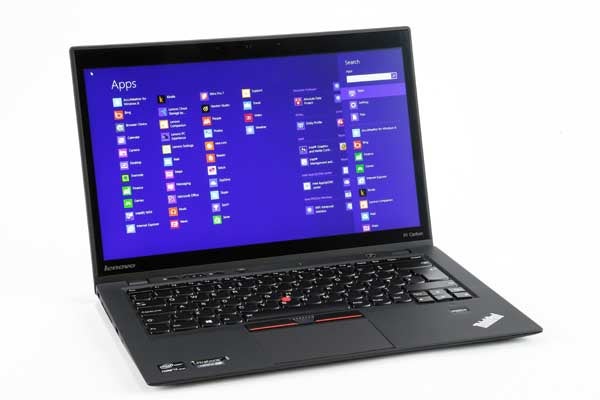 For the most part, the Thinkpad X1 Carbon Touch lives up to its premium price-tag, with fast performance, good looks, portability and rugged build quality. What lets it down is its screen – it’s not exactly bad, but it feels significantly cheaper than the rest of the laptop in terms of brightness, colour accuracy and sharpness.

If its more professional elements are the most important thing to you – rugged portability, fast performance and so on – then by all means consider the Thinkpad. But, unless you really need the touchscreen, we’d opt for the non-touch Lenovo ThinkPad X1 Carbon instead.

If, on the other hand, you’d prefer something more affordable, there’s plenty of options that offer more bang for your buck while still offering great portability. The Sony VAIO Pro 13 and the Samsung Series 7 Ultra NP740U3E both provide a performance not too far removed from the Thinkpad X1, and are available for between £700 and £800 less.

Fantastic performance for business users, let down by an unimpressive screen that makes the high price-tag a little hard to swallow. You can get performance that’s not too much worse in models which are significantly cheaper, if you’re less concerned about ruggedness.

Contact via linkedin
Alan was Deputy Editor of Alphr.com, senior Editor at Mediablaze and a Producer at Mousebreaker, and has freelanced widely for The New Statesman, CNET and Pocket Gamer. Alan currently writes news for …