What is the Lenovo Thinkpad X1 Carbon Touch?

Lenovo’s Thinkpad X1 Carbon Touch is a stylish ultrabook pushing the top end for business users, and the touchscreen version of the standard Lenovo Thinkpad X1 Carbon. With a 2GHz dual-core Intel Core i7 processor, 8GB RAM and a 180GB SSD backing up a 14-inch 1,600 x 900 touchscreen display, it’s a seriously powerful machine with surprisingly sleek looks to match.

At 1.54kg, it’s still light enough to be portable with the power, although that power does come with a £1,730 price tag. So does the Thinkpad X1 live up to it, to be the ultimate ultrabook?

Not what you’re looking for? Try our best Windows 8 laptops round-up. 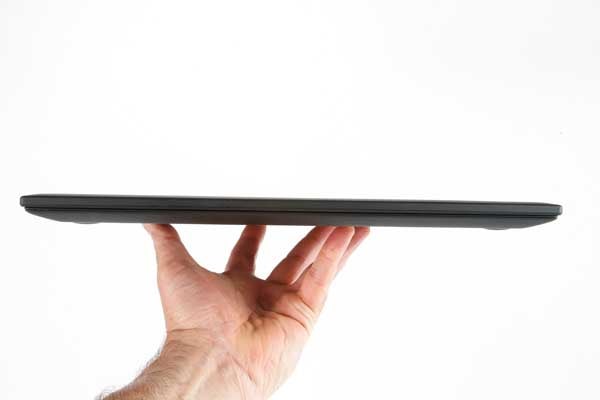 Lenovo’s build quality is as solid as ever here, and it looks stylish too, with a matte black surface all the way round. It’s just 0.74-inches thick and 1.54kg, so portability isn’t a problem either. The only break in the minimalist design is the Lenovo logo and ‘Thinkpad’ decal on the top of the closed laptop: although it feels a little tacky in a laptop of this price that the dot in the ‘i’ lights up when it’s switched on.

Unfortunately, this minimalism also seems to extend to its connections, which is a little underwhelming. Two USB ports, an SD card slot, the headphone jack, a mini display port and the AC slot is all we’ve got here. With the air-vent taking up the rest of the space on the left hand side, there is, as expected, no room for an optical drive. 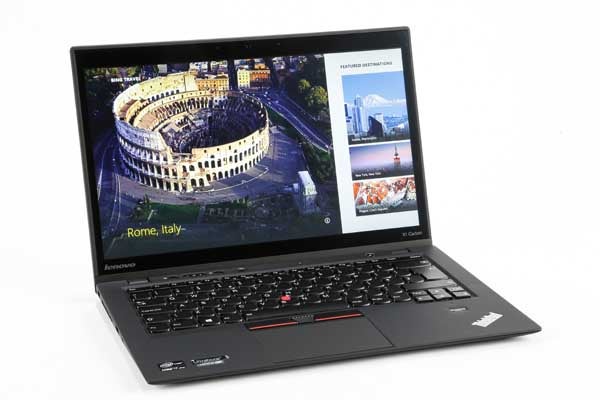 The screen quality on the Thinkpad X1 isn’t the best we’ve seen, and even though the 14-inch display is a little bigger than recently reviewed ultrabooks, the resolution of 1,600 x 900 feels low when other smaller, premium laptops routinely manage 1,920 x 1,080 for a more crisp appearance. It’s fine for everyday use, but when you’re paying a premium it’s a little disappointing.

Other screen metrics are equally underwhelming. Its contrast is just 553:1, which is considerably worse than Lenovo’s recent, cheaper Yoga 11S (1,059:1). The Thinkpad X1 has a curiously cool temperature – our Xrite i1 Display Pro measured it at 7,529K, a long way away from the ideal 6500K D65 standard.

Its 250 nits brightness is good, but a long way short of the Sony Vaio Pro 13 and its stunning 372 nits peak. But the real letdown is its colour accuracy. With a Delta-E score of 6.25 (around 2.0 to 2.5 is acceptable), this is very poor indeed, and subjectively the screen look surprisingly washed out for such an expensive laptop.

We strongly suspect the addition of the touchscreen plays a large part here, as the wider gap between the front of the sceen and the LCD panel is wider. This reduces brightness and adds an extra layer that’s bound to affect the screen’s performance. 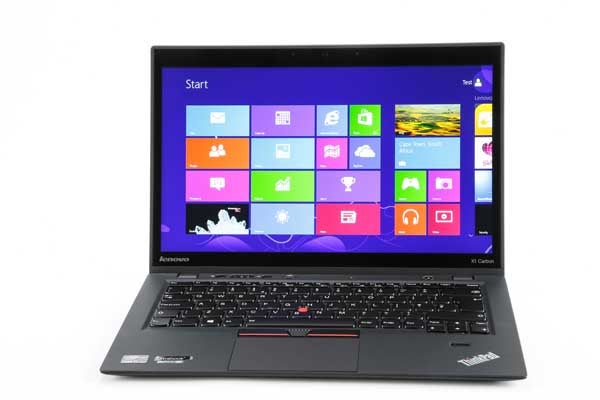 On the plus side, the bezel around the edge is nicely thin allowing for more screen real estate (though the top and bottom sides are slightly thicker for a ‘letterbox’ style appearance), it has decent viewing angles, and its touch functionality works well. With more screen real estate, navigating Windows 8 via touch works better than some of its rivals. The screen also feels pretty sturdy, but will allow you to push it all the way back so it lies flat parallel with the keyboard, should you want it to.