The ‘Think’ brand is something of a legend in computing circles, hailing as it does from the halls of IBM – one of the great pioneers of modern computing. However, when IBM dropped out of the PC market in 2005 by selling its PC division, including the ‘Think’ brand, to the Chinese company Lenovo, fears for the quality of this brand were quick to spread.


Thankfully, Lenovo has proved itself more than capable, and indeed willing, to maintain the same level of craftsmanship that the reputation of ‘Think’ was built upon. Indeed we’ve looked at several ThinkPad notebooks and ThinkCentre desktop PCs since Lenovo’s takeover and we’ve been generally impressed. However, it’s taken a few years for Lenovo to get round to tackling the more niche, though no less lucrative, workstation market so it’s only now we’ve had the chance to assess whether Lenovo can maintain its near flawless record with the ‘Think’ brand or if the heavy requirements of workstations has proved too much. 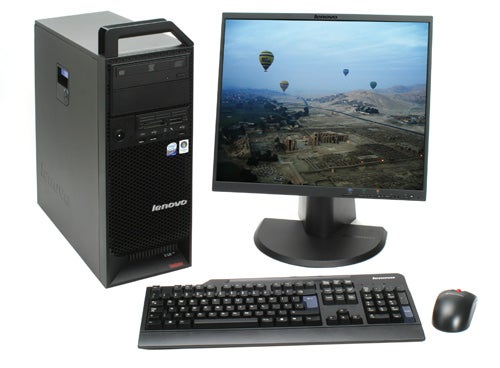 Looking at the available specifications, there’s nothing to raise suspicion that these machines may underperform. First is the machine we’re looking at today, the S10, that offers up to an Intel Core 2 Extreme QX6850 in its CPU socket, nVvidia Quadro FX 4600 768MB for graphics, 4GB DDR3 PC3-8500 ECC RAM, a choice of SATA or SAS (serial attached SCSI) hard drives, and a motherboard based on Intel’s X38 chipset. In case all those codenames, acronyms, and numbers just went straight through one eye and out the other, you can basically interpret all that as the fastest consumer level CPU and motherboard chipset you can buy, combined with the fastest professional grade graphics card and a decent amount of certified RAM.


The ThinkStation D10 takes over from where the S10 leaves off with a move from consumer chipset and CPU options to proper server level equipment. Specifically, the motherboard chipset is now based on the Intel 5400a, which supports and has room for two Intel Xeon CPUs (that’s two physical CPUs, not just more cores), and 64GB RAM. Other options are largely the same but because the case is larger, to accommodate the bigger motherboard, there’s room for a couple of extra drive bays and the case is rack mountable.

Both systems hint at being available with a variety of options but, just as with the HP machine we looked at last week, finding where to specify these options is a bit tricky. Unlike Dell, Lenovo doesn’t deal direct so you can’t build your machine per spec on the website. The only option then, is to deal with one of the many resellers that Lenovo lists on its website. However, because these dealers more often than not provide full turn-key solutions, finding out the exact cost of systems is even more difficult.


If you do want to buy direct, you can get hold of this review system from some online retailers but as we’ll see later, for intense use this base specification isn’t quite fast enough and we’d recommend you sort out some upgrades straight away.

As we’ve come to expect from Lenovo, and particularly the ‘Think’ branded parts it produces, the styling of the S10 is a welcome nod back to days gone by when men were men, long hair and velour flares were fashionable, and computers were for calculating missile trajectories and performing scientific simulations, not browsing the web for the latest celebrity video tidbits. And I, for one, love it. 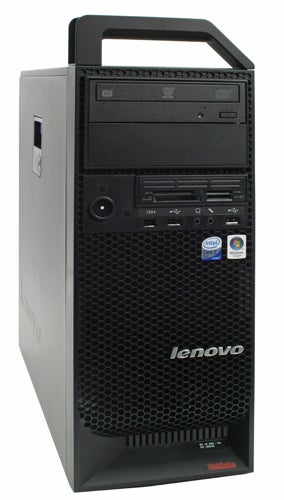 There’s such a rugged industrial appeal to the whole thing with little extras, like the large plastic handle, only appearing when needed but then being finished with a certain angular design flair – don’t you just love the opposing thick and sloping ends of the handle?


The monitor, mouse, and keyboard, are also finished in the same industrial chic manner so you don’t even need to worry about the unique styling of the chassis clashing with the rest of your equipment. The fact that all the peripherals are also of superb quality does help this initial impression a considerable amount as well. I’ll come back to the details of those later, though. First let’s have a look at the actual PC in a bit more detail.


As mentioned, and indeed as is quite obvious, there’s a large carrying handle atop the front. This is a very sturdy affair and it’s quite possible to carry the PC by this handle alone. However, it would be more sensible to utilise the additional handle discretely situated on the back and take the computer’s not inconsiderable weight in two hands. If you don’t like the styling or find the handle gets in the way it can actually be removed.

It’s not all about the handle though, there’s a whole host of other simple functional features besides. For instance, the sturdy side panel lock keeps the PC’s internals secure but once unlocked the large blue handle-cum-button also makes removing and lifting away the panel effortless. 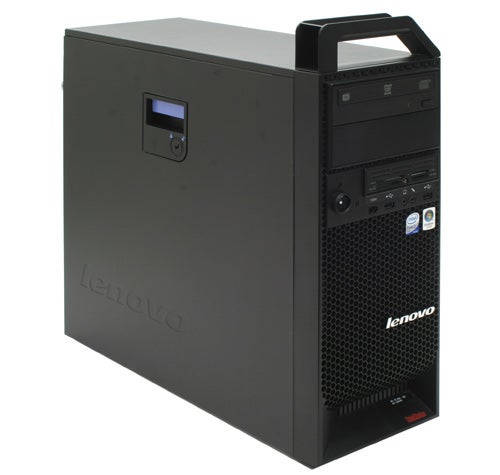 The honeycomb perforated front panel is another example. Obviously its primary use is providing ventilation to the PC but it also adds a touch of class that using regular round holes, or a grille, would’ve lost. We also like the protective surround for the power button that stops it being accidently knocked, and the easy to read illuminated markers above the USB, FireWire, and audio sockets. Again, both are simple and affective additions that make all the difference when working with PCs everyday. 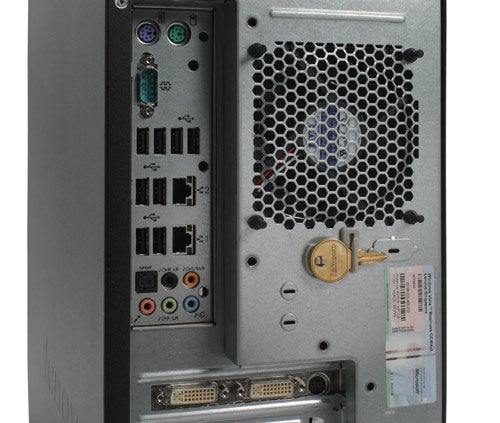 Round the back things are rather more usual with the only notable addition being the little key holder. At first this seems rather useful but of course once the PC is installed this will never actually be used (not unless you have a seriously flawed sense of security).

Inside the case we find a fairly typical layout for this size of case. As well as the two 5.25in and one 3.5in drive bays visible from the front, there’s another three 3.5in bays, for your hard drives, inside. They use quick release mounts, which make changing or adding additional hard drives very easy. There’s also a large plastic expansion card retention bracket that removes the need for individual screws to hold expansion cards in place. The only other thing of note is the CPU cooler that is a reference Intel design but it has an extra cowling between the fan and heatsink, which doubles as a way of reducing noise and increasing airflow. 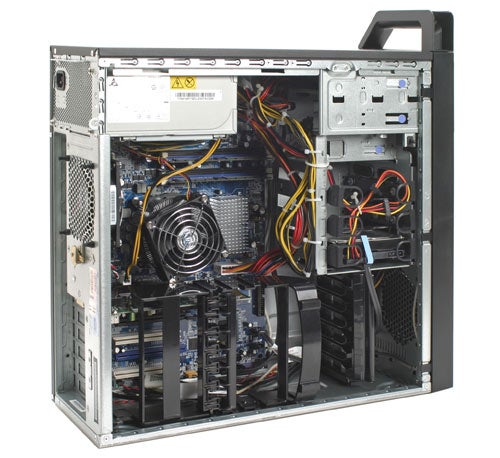 Turning the PC on, the effect of this modification is not immediately obvious as there’s quite an audible whoosh as all the various fans kick in. A moment later, though, they’ve quietened back down to a less intrusive level. Being as our review system was only equipped with an Intel Core 2 Duo E6850 we can’t vouch for how quiet the machine stays when using the more power hungry CPUs this system is configurable with but we’d hazard a guess noise isn’t your primary concern if you’re buying a workstation like this anyway.


As mentioned earlier, the peripherals included with this system are superb. All too often we see business PCs ship with poor quality peripherals, which, regardless of how fast it is, make using the PC unnecessarily difficult. So, if you value your workers’ sanity, getting one of these ThinkStations will be a very good start. 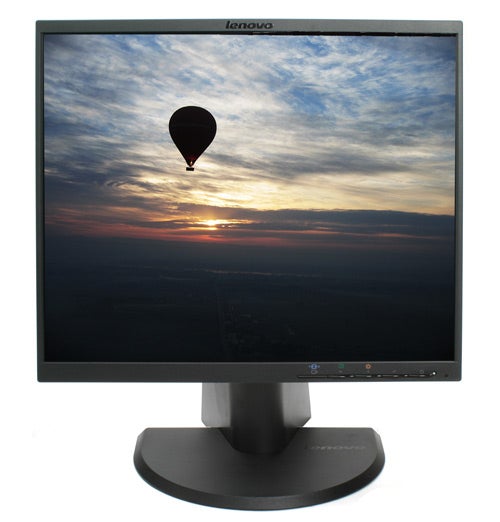 The monitor is the ThinkVision L190x, which is the slim bezelled 19in model from Lenovo’s performance range. It offers swivel, pivot, and height adjustment, includes a four-port USB hub, has inputs for VGA and DVI, and has a bezel only 6.6mm wide. With a resolution of 1,280 x 1,024 it isn’t going to be the best choice for those working in imaging – whether 2D or 3D – and if possible, specifying one of the higher resolution 22in models will be a good idea. For the rest of us, though, the superb adjustability and image quality make this screen a pleasure to use. 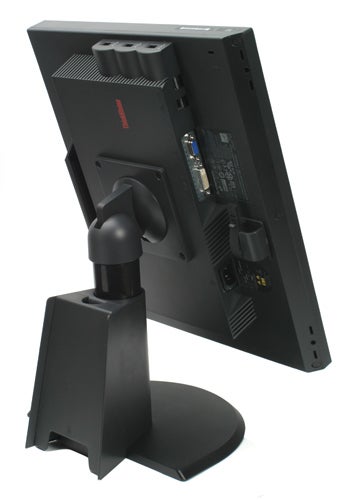 In many ways there’s not much to say about the keyboard – it’s just a standard UK layout keyboard – however the robust build and responsive keys make it stand head and shoulders above most alternatives. The keys’ action is smooth and effortless yet there is that crisp springiness essential for fast typing. Finally, and of course best of all, you also get blue Enter keys.

Finishing the ensemble of peripherals off is probably the weakest part, the mouse. Not to say that it’s actually bad, indeed it works perfectly well, there’s just nothing particularly standout about it. It points, it clicks, it scrolls, now move on.

One of the notable features of the S10 is that it includes a Trusted Platform Module (TPM). These devices consist of a chip, or group of chips, attached to the motherboard that add a variety of extra security features to the system. The main benefit of these modules is they can be used in conjunction with Windows Vista BitLocker to provide full hard drive encryption. To enable the device, Lenovo includes its own ThinkVantage software that will pop up when you start the machine and ask you whether to enable the device. A quick restart later and you’ll be all ready and secure. 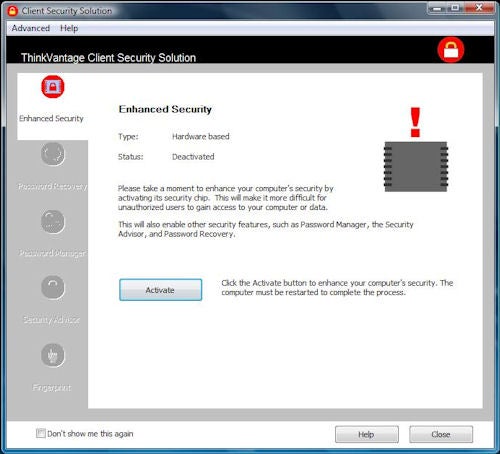 ThinkVantage isn’t just about the TPM, though, it also includes a whole host of other useful security and maintenance features. A quick double click of the desktop icon is all it takes to access the myriad of options. 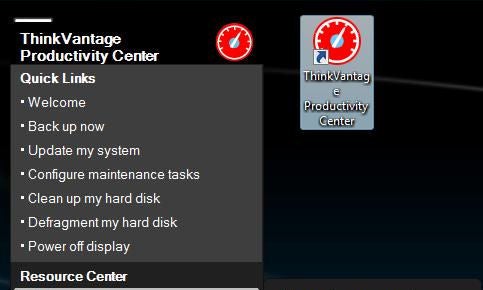 Accompanying this extensive range of services is Lenovo’s superb warranty that covers the machine for three years including parts and labour. The cover is on-site and response is next business day so you should never be left stranded for too long.


The specification we received for review was fairly mild compared to what will be available. The CPU is an Intel Core 2 Duo E6850, RAM quota is only 2GB, hard drive capacity a miserly 250GB, and graphics are provided by an nVidia Quadro FX1700. This meant that although the S10 performed well in our homemade tests, PCMark showed the machine to be considerably slower than the Mesh G92 Pulse Pro, which is a cheaper machine. That said, the Mesh won’t offer you the kind of build quality, security and maintenance options that this ThinkStation will. Although, the amount of security stuff going on in the background made the machine feel quite sluggish a lot of the time, indicating that this basic spec is far from ideal.


The ThinkStation S10 is a very well built, superbly featured, and unique looking workstation. The low level spec we’ve reviewed is a little slow but throw in a couple of upgrades and you’ll be flying along. Once again Lenovo has proved it is more than capable of doing justice to the ‘Think’ brand.