Last year, pretty much every tech company under the sun focused on releasing prosumer devices. Which is why you may be forgiven for overlooking Lenovo’s newly unveiled Thinkpad X1 Tablet here at CES 2016.

After all, with the awesome iPad Pro, Surface Pro 4 and Pixel C already available, what possible reason could there be to consider the Lenovo tablet? As it turns out, there’s a big one.

The Lenovo Thinkpad X1 Tablet is nifty little device that aims to let you add new functionality using add-on modules – a factor that could make it one of the most flexible prosumer-focused devices around.

The modules are add-on attachments that connect to the tablet’s bottom edge. Currently, there are only three on offer. These include an add-on battery pack, a Presenter module and a 3D Imaging module.

The Presenter and 3D Imaging modules are the most interesting, with the first adding a pico projector and HDMI port to the mix and the second a rear-facing Intel RealSense camera. 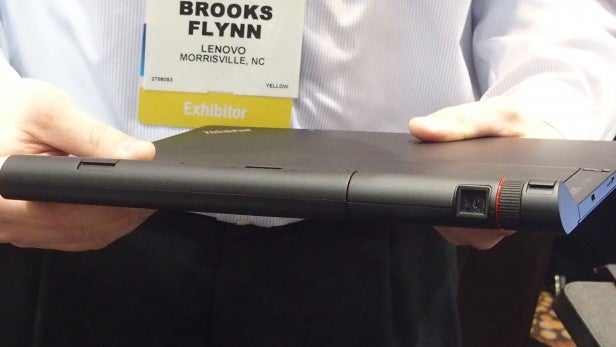 The projector sounds similar to the component used on Lenovo’s Yoga Tab 3 Pro Android tablet, enabling you to project presentations or any video playing on the tablet onto surfaces.

The 3D Imaging module’s RealSense camera is a nifty bit of tech that Intel unveiled back in 2014. It aims to let the tablet capture images and scan items in 3D. In theory, these images can then be used to create renders for everything from 3D printing to models in creative suites such as Blender and 3D Studio Max.

Sadly, I didn’t get the opportunity to test either module on the brightly lit showroom floor. However, if they work, I can see both being a big draw for creative professionals.

Adding to its flexible feel, the ThinkPad X1 Tablet also features a removable rear panel for serviceability and upgrades. This is unusual on a tablet and a key differentiator, separating it from competing devices such as the iPad Pro and Surface Pro 4.

The Thinkpad X1’s creative nous is backed by some pretty impressive internal specs and add-on options.

The tablet features stylus support and is compatible with Lenovo’s optional Thinkpad keyboard – meaning you can turn it into a fully functioning laptop, or digital sketchpad. 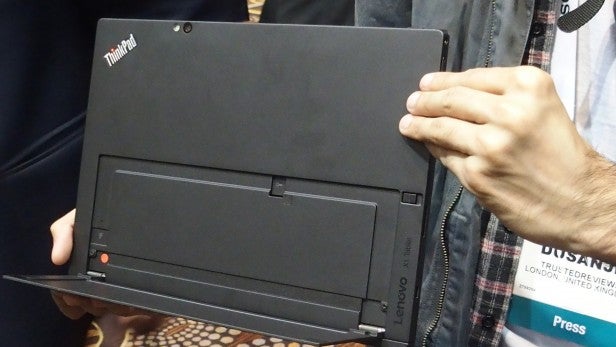 The tablet part of the device also includes a stand similar to the kickstand seen on the Microsoft Surface Pro 4, allowing you to adjust the Thinkpad X1 to sit at a variety of angles.

I didn’t get a chance to see how much of the sRGB and Adobe RGB spectrum the Thinkpad X1’s 12.1-inch screen covered during my hands-on, but was reasonably impressed.

The 2,160 x 1,440 display resolution ensured the screen constantly looked sharp. I didn’t see any evidence of backlight bleed – an issue that has plagued past Lenovo products, such as the Yoga 900 laptop. Blacks, while not the deepest I’ve seen, were also reasonably deep and whites were fairly clean.

In terms of ports, the tablet is reasonably well stocked and includes support for USB Type-C connectivity.

My only slight concern with the tablet’s hardware is its use of a sixth-generation Intel Core M processor. Core M processors aren’t bad, but they’re not the fastest around. Past Core M-powered devices I’ve reviewed have had a tendency to rapidly slow down after a few months’ use and can struggle with demanding tasks, such as large digital-painting or photo-editing projects.

At a guess I reckon the lack of a more robust processor option is a result of the tablet’s miniscule 0.3-inch thickness. 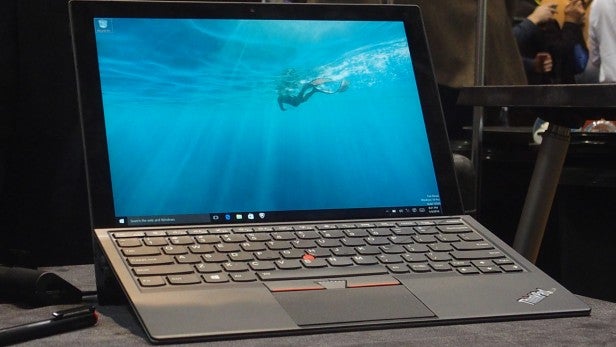 My processor concerns aside, the Thinkpad X1 Tablet is a fairly compelling device. Thanks to its modular focus, the tablet has the potential to be one of the most flexible prosumer devices around.

However, with pricing starting at $899 it’s entering a pretty competitive space of the market, which is currently dominated by powerhouse devices such as the iPad Pro and Surface Pro 4.

Until I’ve had the opportunity to see how the modules perform in real-world use, benchmark its performance, and check its display with a colorimeter, it’s impossible to accurately gauge whether the Thinkpad X1 will make good on its opening promise.

That said, I’m still excited about Lenovo’s latest tablet and can’t wait to put it through its paces more thoroughly when it launches in February later this year.

Check back with TrustedReviews then for a full review of the Lenovo Thinkpad X1 Tablet.