The Lenovo ThinkPad X1 Fold is the best foldable PC I’ve had hands-on time with yet, but with a hugely extravagant price and omission of Windows 10X at launch, Lenovo’s device is more likely to be a novelty luxury than a revolutionary trendsetter. From a spectator’s point of view though, the X1 Fold is easily one of the most exciting devices of 2020.

The Lenovo ThinkPad X1 Fold is new foldable computer that was announced during CES 2020.

While Lenovo isn’t the first company to showcase a device with a bonkers bendy form factor, the ThinkPad X1 Fold is set to be the very first foldable PC available to buy, with a mid-2020 launch window.

This is also the very first foldable PC we’ve had hands-on time with that isn’t a concept. We’ve played around with the Dell Concept Ori and Intel Horseshoe Bend, but neither of those are guaranteed to hit stores.

But with the Lenovo ThinkPad X1 Fold arriving so early, will it set the standard for the new technology, or become the world’s first foldable flop for computers? 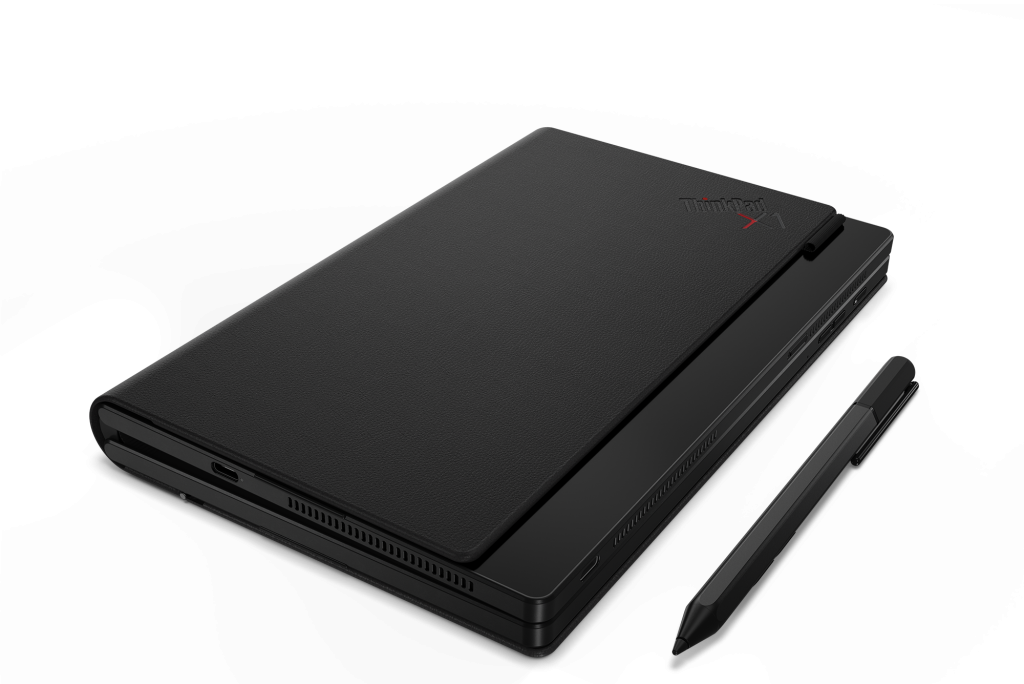 Lenovo ThinkPad X1 Fold price – How much will it cost?

The Lenovo ThinkPad X1 Fold has a confirmed starting price of $2499. It’s expected there will be multiple configurations of this device, where you’ll likely be able to upgrade specs such as storage.

A UK price has not been confirmed yet. but we will be updating this hands-on review as soon as we hear more.

Lenovo ThinkPad X1 Fold release date – When will it launch?

The Lenovo ThinkPad X1 Fold is set to launch mid-2020, featuring Windows 10 as its operating system.

Another model will also launch at a later date featuring Windows 10X, which is Microsoft’s recently announced operating system that’s optimised for dual-screen PCs. With Windows 10X expected to launch during ‘Fall 2020’ you can expect the X1 Fold to bag the new feature around the same time frame. 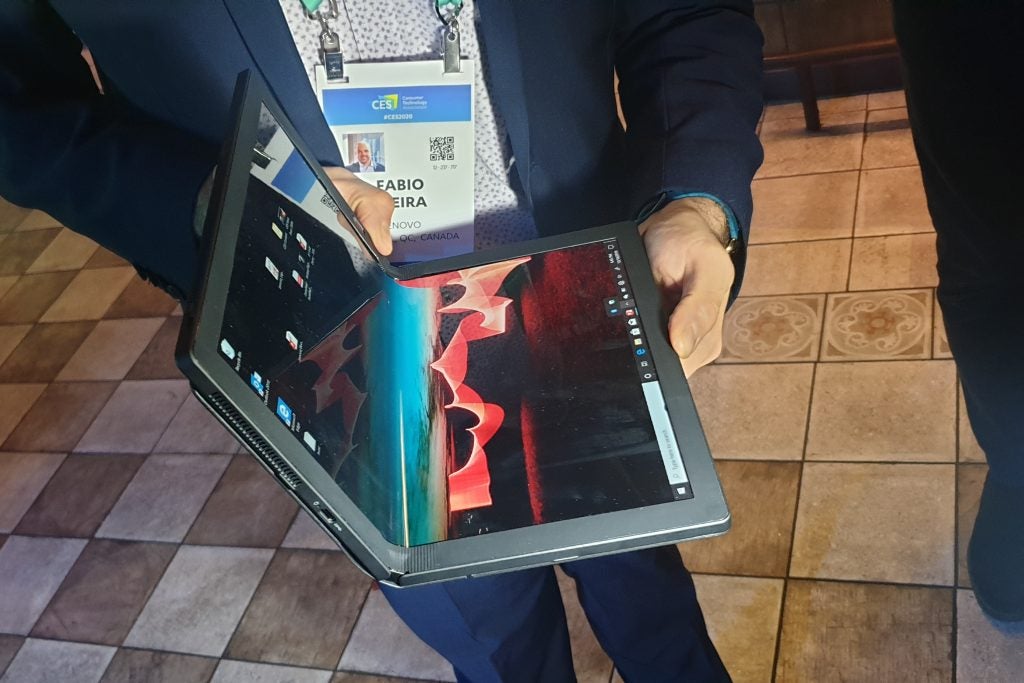 The main story of CES 2020 has been the emergence of foldable technology, with Dell and Intel both wowing audiences with bendy concept devices.

With that in mind, Lenovo’s reveal of its own foldable PC isn’t a watershed moment, but it will be setting one milestone with the Lenovo ThinkPad X1 Fold set to become the world’s first available foldable PC when it launches mid-2020.

When getting my hands on the Lenovo ThinkPad X1 Fold at CES 2020, it quickly became clear how polished Lenovo’s foldable feels compared to the concept counterparts.

As impressed as I was with the Dell Ori, its unremarkable physical casing and software glitches were telling signs it’s not quite ready for shop shelves. The ThinkPad X1 Fold, on the other hand, already looks and feels the real deal. 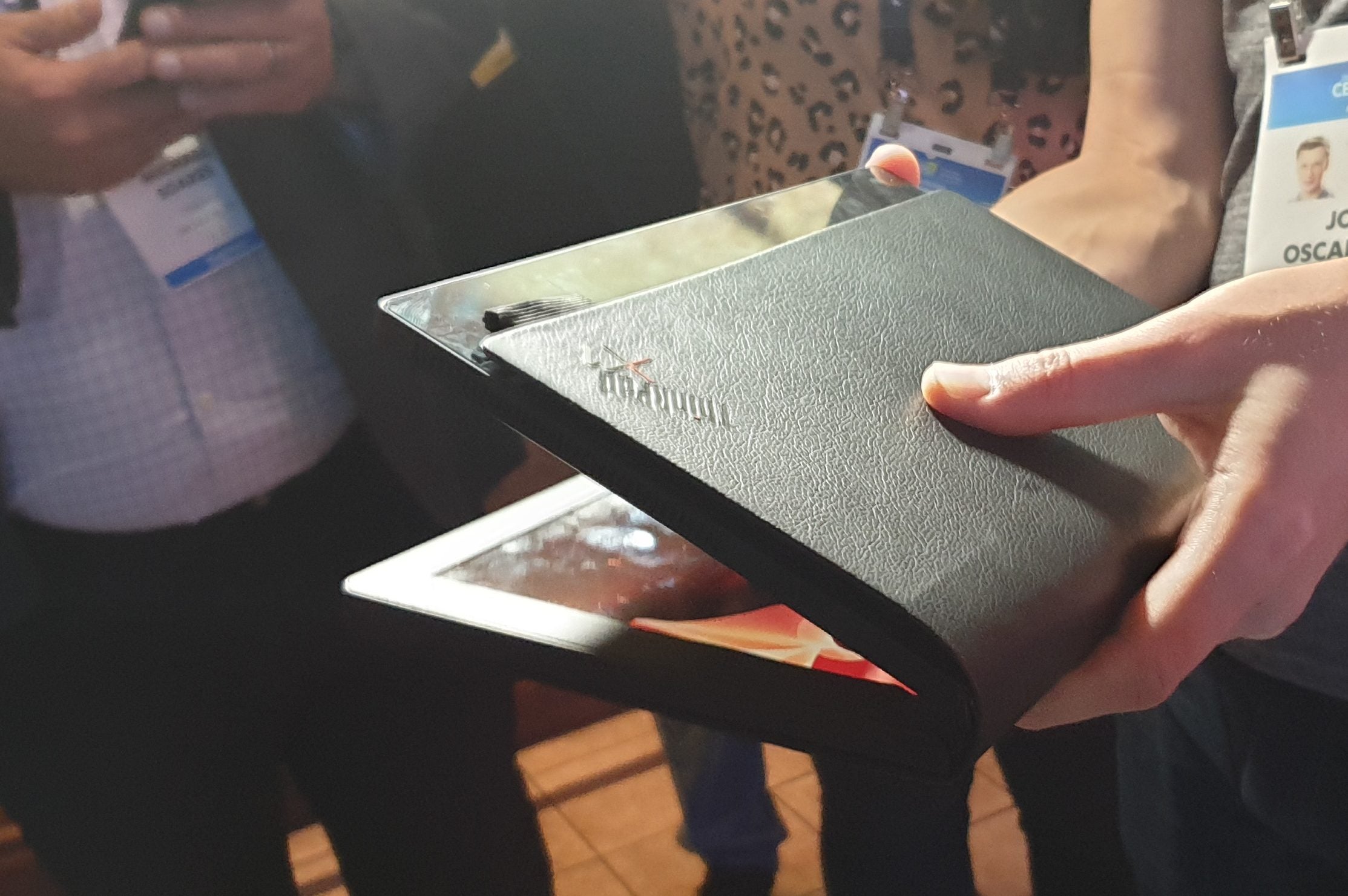 A big help on this front is the leather folio cover, which ensures the X1 Fold looks incredibly stylish when both open and closed. This leather case can’t be removed, as a Lenovo representative explained the multi-layered casing is integral for ensuring durability – something previous foldables have struggled with such as the Samsung Galaxy Fold.

On that note, I asked Lenovo what work the company has done to prevent the screen creasing issue that has also plagued previous foldable devices. Lenono explained it has undergone extensive testing to make sure this device remains unscathed after many, many bends.

It’s great to know Lenovo has undergone such lengths to avoid the issues of previous foldables, but one big question remains: what do foldable devices offer that traditional laptops and tablets do not? This is especially important when you consider the X1 Fold has a whopping starting price of $2499. 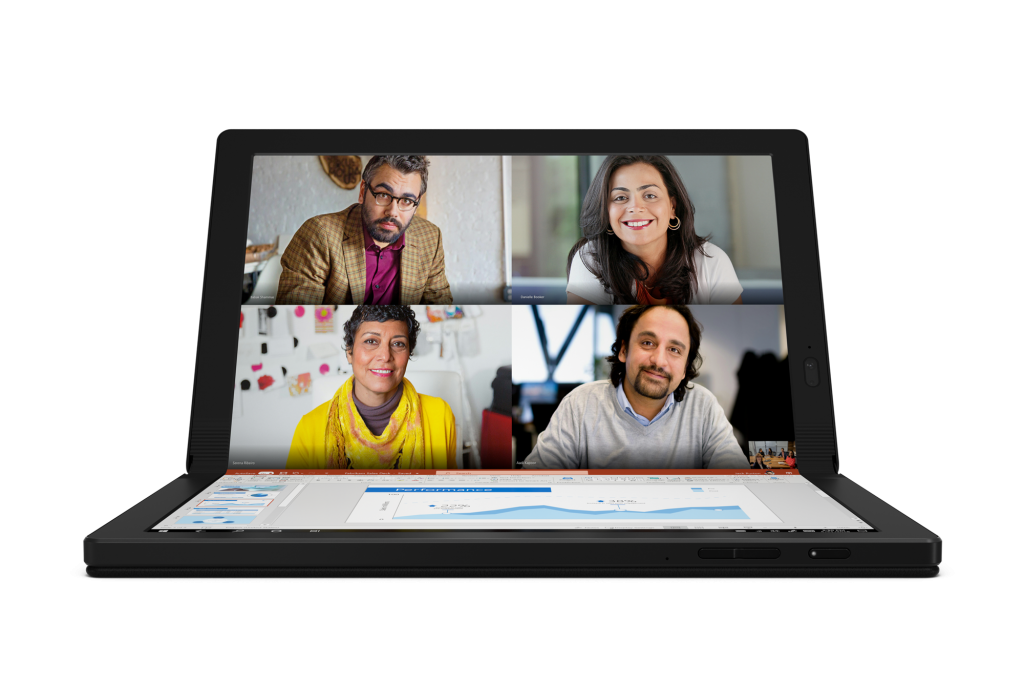 Unfortunately, given the mass number of people looking to get a look at the X1 Fold at CES 2020, I was only allowed a few minutes with the device, leaving me just enough time to examine the design and give the foldable 13.3-inch OLED screen a few bends. That meant I wasn’t able to get a feel for the performance or software of the X1 Fold.

Lenovo claims the device’s capability to show two independent displays simultaneously will “optimise efficiency” when multitasking. The company offered examples such as video calling a friend while editing a presentation on the lower screen, or taking notes while watching an online lecture.

A Bluetooth Mini Fold Keyboard comes with the device, so you don’t need to use the bundled stylus to take notes. You can either place the keyboard in front of the device, or clip it onto the bottom screen magnetically when the X1 Fold is bent at a 90-degree angle to mimic a laptop. 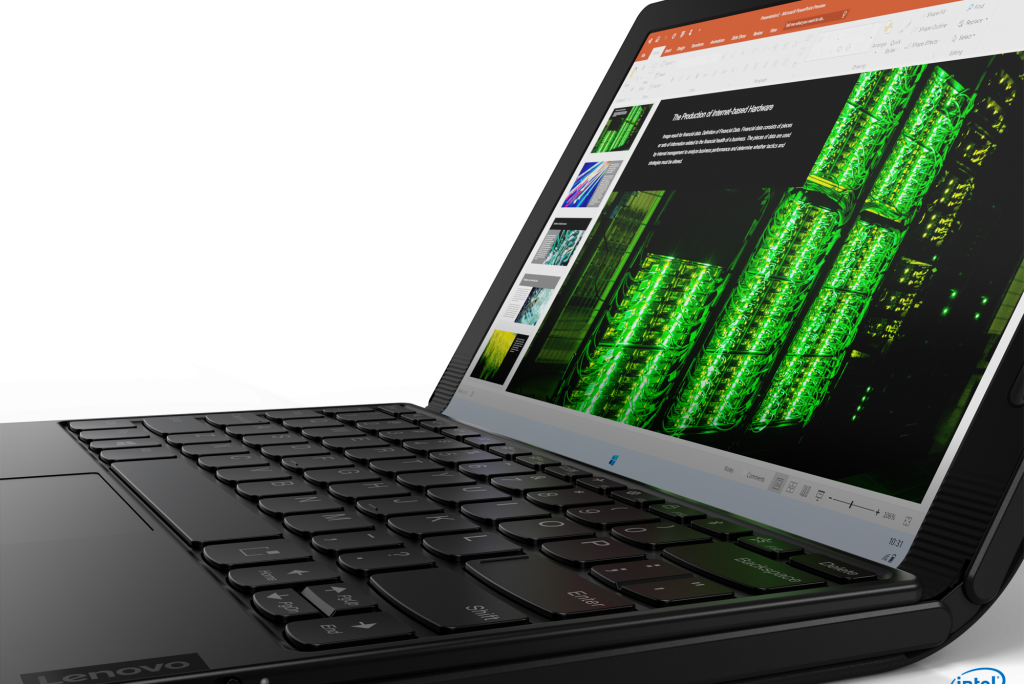 The Bluetooth keyboard can be neatly tucked inside the X1 Fold once closed, where it will also be wirelessly charged. Speaking of battery life, Lenovo claims the X1 Fold itself will last up to11 hours before requiring a recharge. That said, official battery life figures tend to be higher than what’s seen from day-to-day use, so it’s best to remain sceptical until we’ve done our own testing.

Lenovo hasn’t been entirely forthcoming about X1 Fold’s specs after announcing it will be powered by an ‘Intel Core Processors with Intel Hybrid Technology’. I assume Lenovo is referencing the Intel Lakefield hybrid processor, which is confirmed to be used by Microsoft’s Surface Neo.

It has at least been confirmed the X1 Fold features 8GB RAM, up to 1TB SSD storage and various ports including USB-C and a SIM card slot, providing the option of 5G connectivity. 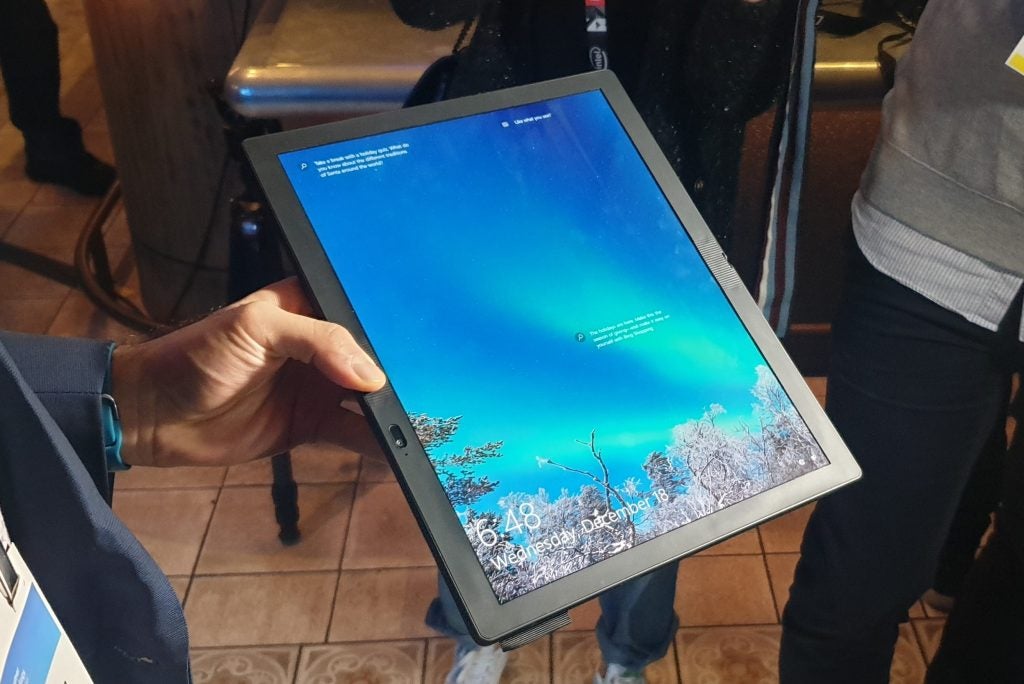 The Lenovo X1 Fold runs on Windows 10, but curiously will also be available with Windows 10X at a later date. The latter operating system is optimised for dual-screen devices, and so immediately seems a better fit.

Then why is Lenovo even offering the vanilla Windows 10 as an option? This is likely so Lenovo can launch its product as soon as possible to bag that ‘world’s first’ title, with Windows 10X not launching until late 2020. This makes me hesitant whether the X1 Fold will be a good buy at launch, with its revolutionary form factor potentially at odds with Microsoft’s software.

Should you buy the Lenovo ThinkPad X1 Fold?

The Lenovo ThinkPad X1 Fold is the best ‘foldable PC’ I’ve seen yet, with a lovely leather design and impressive specs accompanying the versatile form factor.

But while the bendy OLED technology is exciting and brimming with versatile potential, I’m not convinced it’s worth the incredibly steep $2499 starting price. I’m also concerned Lenovo is rushing the release, as the X1 Fold is set to launch before the optimised Windows 10X arrives, leaving you stuck with regular Windows 10 which may be problematic.

There’s a lot of ifs and buts here though, as I didn’t get a long enough time with the Lenovo X1 Fold to see whether it really is worth the cash. I’ll wait until we call it in for review before forming a final verdict. But even if there’s absolutely no way you’re willing to part with so much cash for the X1 Fold, you still have to admit the emergence of this new foldable technology is still very exciting.

The Lenovo ThinkPad X1 Fold is the best foldable PC I’ve had hands-on time with yet, but with a hugely extravagant price and omission of Windows 10X at launch, Lenovo’s device is more likely to be a novelty luxury than a revolutionary trendsetter. From a spectator’s point of view though, the X1 Fold is easily one of the most exciting devices of 2020.